Until recently, I was always impressed with the diversity and ferocity of movie monsters.  Monster movies, action, horror – these genres spawned some pretty out-of-this-world and hungry creatures, including xenomorphs from Aliens, colossal crab-praying mantis’ from Cloverfield, and, of course, the giant St. Bernard from The Sandlot. Go back even further and you’ve got classics like Godzilla, The Thing, The Blob, and Outer Space Death Aardvarks (from Outer Space Death Aardvarks I – IX, the unheralded work of an aging Charlie Chaplin, 1949-53).

Until recently, I didn’t own a copy of Will Wright’s Spore and its expansions.  Now, using the power of a mere piece of software, I can safely say, without fear of hyperbole, that I should be hired to create CGI creatures for all movies from now until eternity and that every puppeteer, computer graphics wizard, and really ugly tall guy in Hollywood should be fired.  I don’t mean to brag, but all of those people deserve a slap and a pink slip based on the fact that my creations usher in a new millennium of the grotesque, eradicating competition in the categories of: scariness, having lots of teeth, gooeyness, ability to rampage, multiple eyeball-ness, and human brutalization.

To prove this fact – and with much humility – I offer you my top 10 Spore creations that would make superior movie monsters:

10. Aborhassb: If gooeyness and blobs of whatever are your bag when it comes to horror, the Aborhassb is your Jackie Chan.  Comprised of red flesh-blotches and weird skin, this rolling mess has a creepy sight-less head and spiky innards.  Two long graspers would drag unsuspecting citizens of Everytown USA into its churning bowels, merging them to itself like a hungrier Tetsuo from Akira.  Monster it dominates: The Blob.

9. Chiiubiss: Pardon my language, but what the fuck is this thing?  It looks like someone’s insides grew fur and were left in the bath too long.  Its face makes no sense.  One of its toes is an eyeball.  Gooey stomach crap is at an all-time high.  Now, call me bias, but in a blank-face eyeball-hands battle between the Chiiubiss and the Pale Man from Pan’s Labyrinth, I think the Chiiubiss would murder the Pale Man and his entire pale family.  Monster it dominates: Pale Man.

8. Inseptor Beetle: Those last two may have been gross, but I’d rather face either of them than an enormous Inseptor Beetle ravaging my city.  This gigantic hard-shelled beetle would arbitrarily crush citizens in the order of who stepped on the most bugs in their life.  A powerful movie with a powerful case of karma!  You can’t exactly punch this thing in the face.  You need an army or a nuclear-powered boot sole.  What’s more, as far as super-sized insects go, some bitch like Mothra would choke on its own onion ring breath before taking on Inseptor.  It couldn’t even escape into outer space because the Inseptor has wings too.  Venom wings.  Monster it dominates: Mothra.

7. Evlich: Somewhere between a face-hugger and a screaming demon fish, the Evlich would scary up any movie.  Maybe not one, maybe not two, but try 40,000!  In fact, inclusion of Evliches into your horror movie would entirely ruin it because they would kill everything before any major plot points could occur.  Forty-thousand insane face scavengers could terrorize a village long before a lovable character spills about how much he loves his kids, or the terrible actress with the amazing body removes her clothes.  They would kill before the power could go out, before the luggage is packed for the road trip, and before that super-tough guy who seems indestructible goes missing. Hell, there wouldn’t even be a token black character because they would be dead before the movie even started.  They’d probably kill your camera crew, eat the tape. You don’t even have a movie anymore!  Monster they dominate: zombies.

5. Phorrc: Spiders are pretty scary, I’ll give them that, but improving on the spider proved an easy task for me compared to those buffoons who made Arachnophobia.  While it may be short two legs, it makes up for it with two extra-large claw hands, capable of opening doors and wielding knives.  If that wasn’t enough, a pile of dopey eyes have been replaced with massive knife-like mandibles of danger.  It’s also true sometimes that dog-sized creatures are scarier than massive city-rampagers, and the Phorrc is the type of fiend capable of hiding under your sink, in your covers, or in your kitchen drawers (with a knife).  Monster it dominates: gremlins. 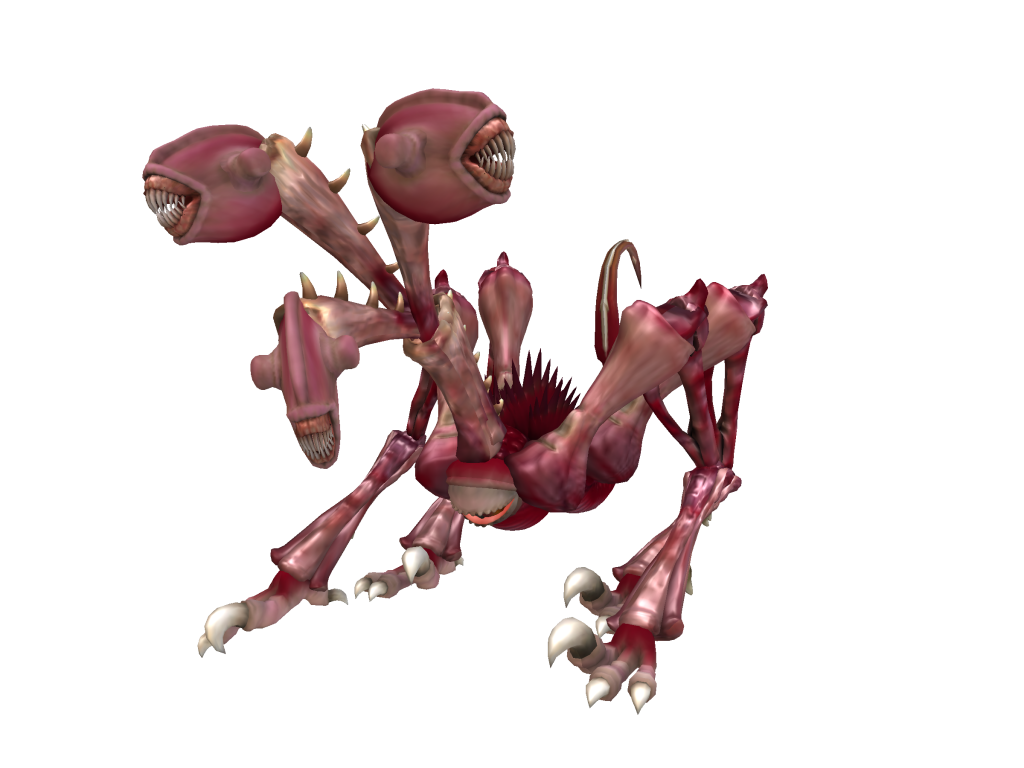 4. Xynosaur: Isn’t this thing bad-ass?  I’d like to take a moment to remind readers: I should be putting all forms of movie professional out of business with these awesome designs.  Any fantasy movie hero would die facing the Xynosaur.  Any space marines that found one of these onboard would die facing the Xynosaur.  Any little boy and girl trying to hack a company’s computer system in an island park for Xynosaurs while a Xynosaur tried to break its way into the room and Sam Neill was holding the door shut – would die facing a Xynosaur.  It’s basically an amazing combination of a velociraptor, two more velociraptors, and anything from Starship Troopers. Monster it dominates: velociraptor.

2. Aerial Shark: Okay, so you’re swimming along and Jaws appears and eats you. Way to go, loser. Good idea swimming in the water where Jaws is. Now try this scenario: you go to the store to get milk – and an Aerial Shark flies out of the bushes, eating your head. You can’t predict that!  They could come from anywhere!  That’s true fear.  Monster it dominates: Jaws.

1. Vermisscus: The Vermisscus is the ultimate destroyer of Tokyo.  Four skulls with razor-sharp teeth, four heavy bone legs, back spikes and an anchor-shaped tail make it all but invincible and easily capable to tackle the most famous movie monsters.  Even if you shrunk it down it would be like some sort of Brontosaurus of death, eating people left and right.  Dragons flee before it, woolly mammoths damn near piss themselves, and the Cloverfield crab-praying mantis would rather shoot itself in the head with a pistol than face the Vermisscus for five seconds.  And yet, despite all this, I inexplicably remain not in charge of designing every single movie monster to come out in the next 50 years.  A Brontosaurus of death I tell you!  Monster it dominates: Godzilla.