EDITORS NOTE* This feature originally ran in October 2019. For our 2020 list of Creepy Game Pass Games click here or watch the video below.

Halloween is only a week away, and it’s the perfect time to settle in, turn off the lights, and scare yourself senseless. But what do you do when binge-watching slasher flicks doesn’t scratch your horror itch?

The answer is simple: video games.

Video games provide the ultimate entertainment experience. You’re not sitting back passively staring at a screen. Instead, video games make you lean in, put on your thinking cap, and deeply empathize with a protagonist.

I’ve nodded off on the couch while watching The Conjuring movies for the umpteenth time. But that won’t happen during a marathon session of Silent Hill. Playing scary video games before bed doesn’t put you to sleep, it raises your heart rate and gets your blood pumping.

Horror movies can’t recreate the anxiety gamers feel as they stumble through Raccoon City’s zombie-infested streets while low on ammo in Resident Evil. And watching movies can’t match the living hell you endure while fumbling through quick-time events as the killer closes in on those doomed kids in Until Dawn.

Scary video games aren’t for everyone. But for a die-hard gamer like me, there’s no better way to celebrate Halloween. I recently signed up for Microsoft’s Xbox Game Pass service and was surprised to see an impressive selection of horror-themed games.

The service offers everything from fast-twitch shooters, methodical survival horror games, and button-mashing brawlers. So, just in time for Halloween, I’ve created a list of 13 creepy Xbox Game Pass titles for gamers who love the horror genre.

Costume Quest 2 isn’t a game that will scare you s#itless – unless you’re scared of cute characters and quirky writing – but it is the most on-brand Halloween title on the list.

Trick, treat and pick a fight with villainous dental soldiers in Costume Quest 2, the sweet sequel to Double Fine’s hit original, Costume Quest, that turned fans of all ages into candy obsessed crusaders.

Upon release, Blair Witch received mixed reviews from critics. Still, there’s no denying how the gameplay vividly recreates the film’s unsettling tone. Perhaps no title on this list shows more potential to freak you out as you sit and play alone in the dark.

Survival horror game set in the haunted forest from The Blair Witch Project (1999), where, in 1996, a man and his dog find themselves lost while helping a search party look for a missing boy.

I’ve never played any of the State of Decay games, and that’s not a knock against the series. I’ve sunk countless hours into zombie apocalypse games that place heavy emphasis on resource management, and I love them to death (I’m looking at you Dead Island and Dying Light). When I think about the style of gameplay State of Decay offers, I see an endless time-suck staring right back at me. I’ll keep my distance… for now. 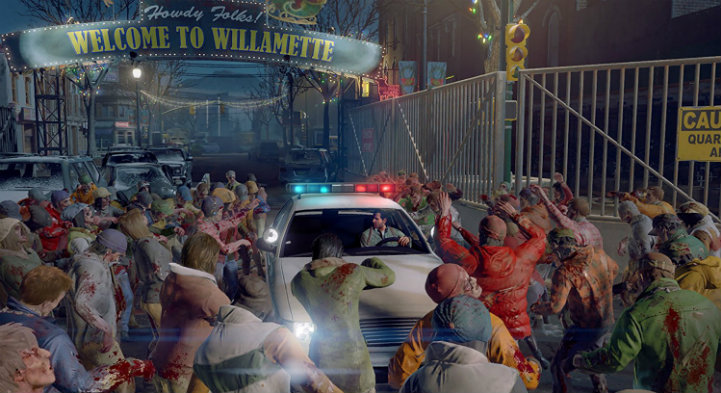 Dead Rising 3 was one of the first must-own games to arrive on the Xbox One. The game offered countless hours of zombie-thrashing action rendered by the most powerful hardware console owners had ever seen. Dead Rising 4 delivers everything fans love about the previous title and then ramps up the insanity with wacky character customization options, limitless weapon combinations, and overwhelming swarms of the undead to splatter.

In 2019 there are plenty of entry points for gamers to dive into Telltale’s Walking Dead series, but I chose Michonne because it’s the shortest collection in the franchise. We have a list of 13 games to get through, and stacked up to the other Telltale games, Walking Dead: Michonne is a mini-series.

The story of what led the katana-wielding survivor, Michonne, away from Rick Grimes’ settlement at the Alexandria Safe Zone and what eventually brought her back.

Upon its release earlier this year, critics and fans dismissed World War Z as a Left 4 Dead rip-off. While the similarities are undeniable, that’s not such a terrible thing. It’s been a decade since Valve hit gamers with Left 4 Dead 2. At this point, I’m down for any studio that tries to deliver the L4D’s brand of cooperative zombie-slaying action. And at Xbox Game Pass’ price point, what’s it hurt to jump in for a few rounds to see if this game is for you?

World War Z is a heart-pounding co-op third-person shooter for up to 4 players featuring massive swarms of hundreds of zombies and fast-paced gruesome action.

Look, I know many people consider Resident Evil 4 as the series high point. But I never had more fun play Resident Evil than when my lady and I battled our way through Resident Evil 5’s couch co-op. If you want to splatter zombies with a special friend, this title deserves a long hard look.

Sent in by the BSAA, Chris Redfield has a new mission. It takes him into South Africa where he encounters a new horror and relives an old past.

Alien Isolation arrived amidst sky-high expectations and was met with lukewarm reactions. The game captures much of the tension and dread of the classic horror/sci-fi series but at times also suffers from tedious gameplay. If you ride or die for the films, then Alien Isolation deserves a spot on your must-play list. For everyone else, watch some gameplay trailers and then check out some reviews before committing to this one.

Set fifteen years after the events of Alien (1979), gamers play as Ripley’s daughter and embark on a mission to find her missing mother.

There are a lot of zombie games on this list, and Alien Isolation and Prey mix things up by adding a sci-fi twist. Prey offers a thrilling mix of horror and sci-fi that hooks players with a mysterious plot that would make J.J. Abrams proud.

Morgan Yu is trapped abroad a space station filled with shape-shifting aliens with no memory of how he got there. Guided by a mysterious stranger and his former self, he must set the station’s self-destruct before the aliens reach Earth.

Luchadors, Mexican folklore, and super-powered chickens combine for one of the most addictive and beautifully rendered platformers to arrive on consoles. Step into the Mexiverse as Juan Aguacate and run, jump, and button-mash your way through a series of supernatural adversaries until your fingers bleed. Guacamelee! 2 gets bonus points for its four-player co-op.

Batman: Arkham Knight is my clear-cut favourite game on this list. And even though it’s technically not a horror game, let’s keep it real: every night in Gotham City feels like Halloween. It helps that Arkham Knight sees Batman facing off against Scarecrow, a villain who, surprise surprise, wants to lace the city with his nightmare-inducing fear toxins. It’s not like Gotham needs fear toxins to make residents s#it their pants. This game sees Batman square off with Man-Bat, Professor Pyg, and Hush.

With his back against the wall, Batman turns to his closest allies to help him save Gotham City from the clutches of Scarecrow and the Arkham Knight’s army. A familiar face also returns to give The Dark Knight a message he cannot ignore.

There are many reasons that the Mortal Kombat series has stood the test of time; addictive gameplay, gruesome violence, and its over-the-top mythology. These games have demons, ninjas, and inter-dimensional warlords square off for control of the Earthrealm. Seeing the game in action looks like a live-feed streaming straight out of Dante’s Inferno. And if Mortal Kombat’s cast of bloodthirsty warriors weren’t already terrifying enough, this nightmare creature is a playable character.

Two years after the death of Shao Khan, the heroes of Earthrealm must face their fallen comrades and prevent Shinnok from corrupting the Jinsei, the source of Earthrealm’s life-force.

If video games ever get their version of Mount Rushmore, the original Doom deserves a spot. Doom left its blood-splattered mark on the FPS genre all the way back in 1993, and the video game industry hasn’t been the same since. After all these years, the revered franchise has never regained its special magic. So, nobody expected the 20016 Doom reboot to be so good. Upon release, fans of the series were blown away by the remakes enjoyable mix of updated character designs and bloodthirsty demon-slaying action.

On Mars, a massive research facility tapping energy from hell has been overwhelmed by demonic forces. As the last DOOM Slayer, you have been resurrected to do one thing; to cleanse this world and send them back to where they came from.