In the exact opposite sentiment of Game of Thrones, it’s time for film buffs to start speaking in hushed tones that “Summer is coming.” While the winter had one film with some direwolves of a different sort, the summer traditionally heralds the first huge hurdle of the cinematic year for studios. But how did things fare between January and April this year? We’re here to take you through some of the biggest winners and losers of 2012 thus far, as well as a few things that the jury still seems to be deliberating on.

Good for: The Environment

As if the success of The Hunger Games with its heavy environmental and sociological subtext wasn’t enough (workers who provide energy and no-renewable resources are marginalized), this was a great start to the year for movies that tell audiences not to mess with Mother Nature. Dr. Seuss’ The Lorax made a mint at the box office, second only to Hunger Games in overall performance. Big Miracle, a movie about saving a family of whales trapped under ice in the arctic, outperformed in its opening weekend and even though it vanished pretty quickly after that, it will find an audience on home video with ease. The roughneck oil workers in The Grey get their comeuppance from a group of pissed off wolves. Even those damned kids in Chronicle shouldn’t have been messing around in the woods in the middle of the night. With all of the record above normal temperatures being recorded in the US and Canada, maybe it’s the perfect time for audiences to be flocking to this type of fare. 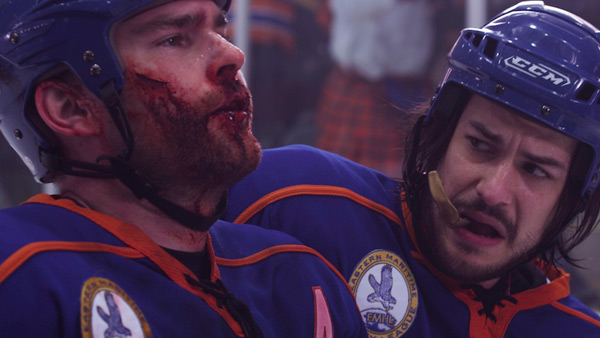 Aside from Goon making almost four million dollars at the Canadian box office, and untold amounts from its VOD run in the States, this was a great season for independent filmmakers in Canada, with auteurs Guy Maddin and Bruce McDonald seeing releases of their latest films, and with several micro-budget features (Moon Point, The Odds) finding their way into Toronto area megaplexes instead of simply shuffling off after a one time rep cinema screening. The quality of some these films might not be at the level they need to be in order to perform on the world stage, but showing support for local and emerging talents is certainly a step in the right direction.

So what was the third highest grossing movie of the year right behind Hunger Games and The Lorax? The Vow. Holy crap did that movie make a lot of money from people around the Valentine’s Day holiday. You know what was right behind that and looking to eclipse the success of that movie? The action comedy 21 Jump Street. Sharing the common bond of star Channing Tatum – who was the best thing in both films despite one of them not being very good – these films proved that he’s here to stick around for a while as a leading man. Sure, he’s still learning the craft to some degree, but this summer when he re-teams with Steven Soderbergh (following Haywire, where again, Tatum was a highlight) for the somewhat autobiographical Magic Mike and he returns to the G.I. Joe franchise, he stands to become the year’s biggest breakout star in a huge way.

Good for: The Little Guy

While people didn’t exactly travel to the arthouse in the purest sense of the word, they did make several modest releases fairly buzzworthy so far this year. The Raid: Redemption has garnered quite the following as it found its widest release this past weekend, making a nice little profit in North America alone without even going into how much it made overseas. Salmon Fishing in the Yemen has quietly bounced in and out of the top 10 for six weeks now, performing almost consistently well and showing an almost yeoman like longevity. And even though it starred Will Ferrell, industry insiders were shocked that his Spanish language indie Casa de mi Padre was able to debut in the top ten on its opening weekend despite an 800 screen release. People certainly started looking beyond the megaplex in early 2012, which is strange to see in a season usually dominated by Oscar holdovers. This wouldn’t have been as surprising in December, but in March and April it seems to be showing a slight shift in viewing habits.

It’s already started. The complaining and eye-rolling from the internet speculators that The Cabin in the Woods has vastly under performed in its opening weekend at the box office. A similar complaint arose earlier this year when The Grey opened well and then faded from sight, and by many defenders of John Carter. The sad truth is that most of the people doing most of the complaining come from the same demographic that complains about everything. Young-ish adulthood has become the new 80-year old telling kids to get off their porch. It’s a sad but true fact that most of the people in this demo don’t even bother going to the movies. They are generally the poorest, with the least expendable income, and more likely to download or stay at home and stream a movie rather than going out to a night at the movies. This is why advertisers in the future will just stop catering to you guys. They will aim lower and higher, but never on your level. And if you guys don’t get your shit together, they will just stop making movies for you altogether. Stop complaining that things are failing. Get engaged and support them. Tell your friends. Get out of your house. I know there are tons of problems with going to the movies these days, but if you don’t keep going, you need to stop complaining. Studios are starting to catch on fast that internet complaints in no way earn them any money, and they’re beginning to question if the “credibility” it buys them is even worth it sometimes.

Bad for: Smart sci-fi and horror

Speaking of John Carter, I don’t think we can get through this column without at least mentioning the astronomically budgeted sci-fi epic tanking at the box office. While the actual budget is as immaterial as your opinion of the film, it’s kind of a bummer that a film that’s actually trying to make something with some brains to it can’t even make half of what Underworld: Awakening made. Again, you guys need to be careful what you support.

Mirror Mirror and Wrath of the Titans kind of failed on their own merits this season. Well, maybe they didn’t. I can’t really tell, but not too many people seemed to outright adore either of them. Plus, from a budgetary perspective, both films look alternately stunning and somewhat cheap. Both are hard movies to really peg down, but it seems like audiences are gravitating away from opulent looking epics and action films that have little more than tenuous literary hooks. Ditto this week’s Lockout, which debuted in ninth place in its opening weekend most likely because it didn’t really know what it wanted to be outside of a near carbon copy of Escape From New York in space.

Bad for: The MPAA and Harvey Weinstein’s already tenuous credibility

If the kerfuffle over the MPAA ludicrously slapping an R-rating on Lee Hirsch’s documentary Bully wasn’t bad enough, Harvey Weinsetein taking to the pulpit against them before caving in and dubbing in some of the film’s salty language felt like such a cynical, marketing driven move on the part of a movie that genuinely had its heart in the right place, The battle could have started here in the necessary fight to revoke or retool the MPAA charter, but nope. We can’t have that when there’s money to be made from controversy. The movie Bully is vital and somewhat flawed, but there are no winners in this behind the scenes situation. Everyone just looks silly.

The Jury’s Still Out On: The found footage film

So the first film to be released in 2012 was the God-awful found footage horror The Devil Inside, which despite near universal hatred, still managed to make thirty times (!) its budget in a single weekend. That film probably didn’t help the genuinely awesome Chronicle’s chances of doing more than just a really great opening weekend. Then there’s Project X, which despite having more detractors than defenders has quietly made a really tidy sum of money this spring. The found footage trend hasn’t shown signs of slowing down, but it’s getting harder and harder to tell which of these movies will work and which will sink like stones.

The Jury’s Still Out on: Middle aged action heroes

Aside from Safe House crossing the hundred million dollar mark at the box office with Denzel Washington tormenting young buck CIA agent Ryan Reynolds, it seems like it might be time for a new breed of action star. Again, The Raid: Redemption did well in limited release and 21 Jump Street killed in wide release because they were giving people something that one the surface seemed fresh and new. Even the inexplicably popular Act of Valor which cast real life Navy SEALS and non-actors in a video game styled depiction of modern warfare, at least gave people something that felt visceral and untried. The Grey and Wrath of the Titans both proved that even Liam Neeson can only take a movie so far. Katherine Heigl failed to re-ignite the 80s female bounty hunter caper with the dreadful One for the Money, and Mark Wahlberg under performed as a smuggler in Contraband. I’m sure none of these people are in trouble to find work as actors, but their days of running around firing off guns and screaming at people might be coming to a close.

The Jury’s Still Out on: Jason Segel and Paul Rudd

With The Five Year Engagement yet to be released, it should be noted that Jason Segel hasn’t really set the world on fire as a box office force to be reckoned with. Sure, The Muppets was a fun movie, but it never hit the coveted hundred million dollar milestone at the box office everyone though was all but assured. His indie film from this spring, Jeff, Who Lives at Home was a miserable disappointment even by semi-mainstream arthouse standards. The same could really be said for Paul Rudd, who couldn’t give away tickets to Wanderlust earlier this year. Neither of these Apatow grads have really been able to live up to their perceive potential as leading men, but they are always pretty great in whatever they do. Before they both re-team with Apatow this December for the Knocked Up spin off This is 40, Segel’s successes hinge on Five Year Engagement (directed and co-written by Muppets and Forgetting Sarah Marshall cohort Nicholas Stoller) while Rudd will retreat somewhat back to the indie realm with a role in the long anticipated adaptation of The Perks of Being a Wallflower. The material has been there for the most part, but audiences have been somewhat fickle. It will be interesting to see what the rest of this year and the near future have in store for these guys.