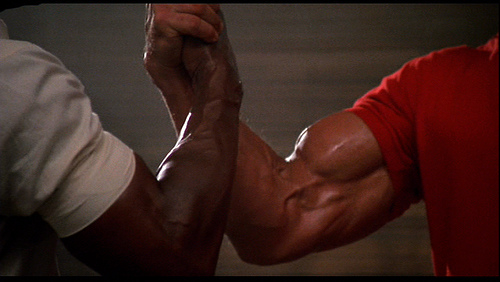 With the recent announcement of the Robert Rodriguez produced sequel/reboot of the Predator franchise, Premiere Magazine went back and took a look at the film that started it all.  They learned that the original Predator isn’t just a movie featuring Arnold Schwarzenegger in top form, or even an above average 1980’s action film.  No, Premiere believes that the film is something much more; a motivational piece that we can all benefit from seeing, they believe that Predator is a guide to living life well.

8 Life Lessons We Can All Learn From Predator @ PremiereMagazine.com

Personally, I learned that if you push to many pencils you won’t be able to match Arnold in a “push it to the limit” arm wrestle, even if you are Carl Weathers.

Thank you to Alana for the link.