When the news broke a week ago that Alex Trebek had lost his hard-fought battle with pancreatic cancer, it was immediately apparent just how many people it affected. Messages of condolence, shock, and sadness swamped social media as the news spread. Stories of his kindness, good humour, and smarts permeated each and every memory as friends spoke of his love of DIY, classic films (William Wyler’s Wuthering Heights was his favourite), hockey, horses, and Canada. Canadians are always quick to claim Sudbury-born Trebek as a favourite son, and the love truly went both ways.

Many of us, no matter where we’re from, have never experienced a world without Trebek. We grew up watching him host Jeopardy or—before that—Reach for the Top. Some even heard him on CBC Radio Ottawa before he made his way to his most well-known medium, television. He popped up in our favourite shows like Golden Girls and The X-Files and was parodied in one of Saturday Night Live’s best recurring sketches. He became an essential part of pop culture and, thanks to his almost 40 years on everyone’s favourite game show, he made being smart fun and, perhaps, even cool. For nerds like me, he made appearing beside him on Jeopardy a bucket list item to be achieved and crossed off.

Once I’d aged into the eligible range, my grandmother Toni made it her mission to get me to audition for the quiz show, to win, and to meet Trebek. I’m still unsure which part was more important to her, but I suspect it was the latter. Her dream finally came true in February 2019 when I was called to appear as a contestant, just a week before Alex announced he was fighting Stage 4 pancreatic cancer. Sadly Toni did not live to see my achievement as she had lost her own battle with that most insidious of cancers just two years earlier.

By the time you made it to that famous Sony stage, it feels as if you’ve made it to the peak of Everest. Each player has been tested multiple times: has auditioned, played more practice games than you ever thought possible, and studied harder than you ever did for any school exam. Once you’ve competed on Jeopardy, you often get questions about just how stressful the experience is. It’s not. The stress comes beforehand. Once you’re there, the hard part is over and the staff works hard to make everyone as confident and comfortable as possible.

When I finally walked from the Green Room onto the set and sat waiting my turn, I marvelled at how small it all was, how intimate. And when I was up, I stood at the player podium—waiting as the crew adjusted the platform beneath me to fit my height: “Up a bit, up a bit, up a bi…TOO FAR!” Up and down I went like an indecisive top. Once I was at a reasonable elevation and things stopped spinning, I had some time to stare up at that massive game board and eventually start to relax and settle in.

Then before you know it, it’s go time and there he is. Alex Trebek. The host, the icon, the legend. A man that you’ve been watching on television almost every night for 40 years. It felt surreal to see him there in front of me. Alex immediately disproved that old adage about never meeting your heroes. Smart, welcoming, enthusiastic, and professional—it’s easy to see exactly how well-suited he was to the job and how he remained at the top of his profession. Trebek had the ability to bring out the best in people, while simultaneously reminding them not to take any of it too seriously. He also visibly enjoyed a hard-won answer, an impressive category sweep, or a competitive match. The more excited a contestant was to win, the more enthusiastic Alex was and it was infectious to watch and to experience in person.

That’s not to say that he didn’t take equal delight in teasing players. Just last week he ribbed contestants after they all whiffed on a clue about Quebec. Then a few days later he did it again after players missed out on a clue about Manitoba. Trebek made it a kind of tradition to sass American participants when they showed their ignorance of their northern neighbour. A Jeopardy tradition adored by said neighbours, perhaps with more relish than is altogether healthy. 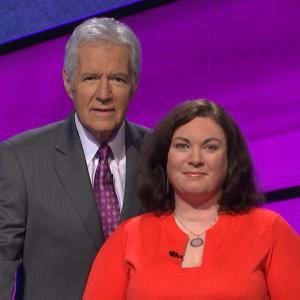 This Canadian managed to stay afloat for two episodes but didn’t manage to get either Final Jeopardy clue correct.  Alex was visibly disappointed when none of us knew the answer in my first game. Never mind letting myself down, I felt like I’d let Alex down. So when I drew quite a tidy blank on the second Final, I panicked and scribbled down an answer that made me laugh. Turns out it made Alex laugh too, which I consider a victory in and of itself.

A Man to Remember

Many contestants point to his dry sense of humour as what they’ll remember most about him. 2019 Tournament of Champions contestant Lindsey Schultz spoke to us about one of her favourite memories of being on the show–a moment where she played straight-woman to Trebek. “In my first contestant interview, I talked about being bad with faces,” she remembers. “After I was finished, he paused, looked at me, then pointed to himself and said ‘let me help you. Pat Sajak.'”

Another 2019 Tournament contestant, Steven Grade—who roundly defeated me in my second game—remembers Alex providing some excellent personal advice, even as he was himself beginning his second round of chemotherapy. “That was an emotionally intense few days for all of us,” Grade remembers. “In the interview portion of what ended up being my last game, he asked me about a trip I was planning to New Zealand in 2021 to coincide with the 20th anniversary of The Fellowship of the Ring.” After losing to powerhouse James Holzhauer, Trebek came over to Grade to tell him not to wait for a special occasion to take a trip like that: “He told me to do things like that when I could and make it into a special occasion all on its own.” Grade marvels: “He was going through so much that year and that week in particular but despite all of that, he still took a moment to offer some friendly advice and hard earned perspective. That’s a kind of selflessness and thoughtfulness that you don’t find in just anybody.”

It seems each and every contestant has a distinctive memory like these. A joke, a kind moment, a commiseration—he had the uncanny ability to be exactly what people needed, when they needed it. We all considered ourselves lucky to have made it onto the show but now, I think most of us will consider that we were once lucky enough to have time with Alex Trebek.