It’s that time of year again.

For some, it’s a time of merry-making and hot cocoa sipping and well adjusted family dynamics. For others, it’s a time for manic shopping sprees, Seasonal Affective Disorder, and obligatory work parties filled with awkward small talk with the intoxicated gentleman from Accounting who’s pretending he didn’t just puke in the sink.

Whatever your creed, religion, or if you think fruit cake is a scrumptious treat or just very confused drunk cough medicine bread — you can bet your jingle bells that many of your favourite television shows have had the full cast of characters in at least one situation based around the advent of the New Year.

So get some corn for poppin’ and call me the ghost of Christmas Episodes Past bringing you a handful of holiday-themed home theatre classics (in my tiny tinsel world anyway).

The X-Files – “The Ghosts Who Stole Christmas” 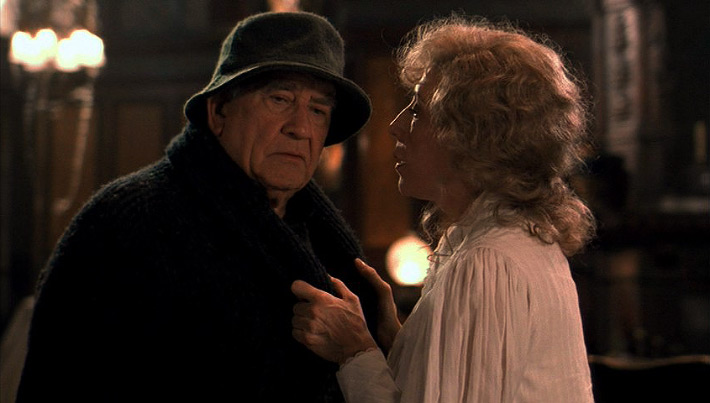 Get into the Christmas spirits by watching sad and ever-so-alone Mulder whose only friend is a bag of sunflower seeds. He manipulates his contrarian partner Scully into going into a house of ghouls on the evening of December 24th.

Filled with scary ghost stories and tales of the glories of suicide-homicide stricken Christmases long, long ago, it’s a perfect watch for those who love the supernatural and somehow think that watching a stop-motion animation special doesn’t make Christmas terrifying enough as it is (Rudolph’s whining red nose still haunts me).

Plus, a ghost actually says the line, “You look like you’ve seen a ghost.”

Oh yeah, and the phantoms aren’t just good with the words, they’re also really into pop psychology. For whatever reason, the apparitions are specifically obsessed with driving the point home that everyone in the world is truly alone and an over bearing sense of hopelessness and futility is what the holidays are all about. So you should, you know just kill yourself, and everyone else.

They’re basically the complete opposite of the angel from It’s A Wonderful Life.

Mad Men – “Christmas Comes But Once A Year”

Speaking of wanting to throw yourself off a bridge, if your looking for the perfect show that captures the desperate and lonesome psyche of the rich white male in the exceedingly consumer based American culture of the 1960’s, look no further than Mad Men.

What else would you want to warm you up after a day of navigating the sullen hordes of last minute shoppers, than Don Draper giving the cold shoulder to his secretary after having sex with her on his couch?

Friends – “The One With Phoebe’s Dad”

Holidays are a hard time for most of us, but particularly for Phoebe Buffay; a deeply emotionally traumatized woman, who’s mother killed herself on Christmas, lived on the streets for many years, and now realizes that her grandmother lied to her about the true identity of her father — but remember — it’s a comedy!

Do the laughs keep rolling in, I tell ya. Phoebe works through her daddy issues all the while trying to enjoy the festivities that Father Christmas provides. Of course it ends with all the friends together, which always confused me a little bit because do they all not have families to visit on Christmas Eve?

Also, aren’t Monica and Ross Jewish? I mean this issue is vaguely covered in “The One With The Holiday Armadillo” where Ross has another one of his classic mental breakdowns.

There’s nothing like wishing those you love a “Very Merry Happy” as the shortest days of the year come to pass. Hopefully you can squeeze in the PC Merriment that our favourite students at Greendale Community College have to offer.

Shirley tries to cram her Christian Christmas dogma down everybody’s throats, but she quickly finds out her fellow students are Jewish, Muslim, Jehovah’s Witness, Crazy Cult Follower, and Agnostic (ugh).

But don’t worry, they’re able to resolve their differences and get into an ol’fashioned Saturnalian brawl. It’s a very special episode that shows us what the seasonal spirit is truly all about: having tense conversations about religious dogma, and uniting against a common enemy.

“Afternoon Delight” is an ode to the creepy uncle: one uncle unknowingly singing a duet with his niece with deceivingly dirty lyrics, another uncle obsessed with the amount of money his suit costs (COME ON!), and the sad and slightly deranged uncle who thinks winning plush toys is akin to going into the Army (see if you can spot the foreshadowing with the fact that Buster gets “hooked” on the toy machine and wins a stuffed seal).

Christmas time can make us all a little blue. For Tobias this sentence couldn’t ring truer as his dreams about being part of the Blue Man group melt away like the ice in Lucille’s fifth cocktail. Michael’s also a little sad because his son George Michael has a new girlfriend with a creepily religious family. Pop-Pop’s still in the attic, Lindsay can’t find anyone who will do her now that she’s in an open relationship, and Lucille ends up getting stoned and driving into the banana stand.

If dysfunction is your family norm, this is a great watch to have a moment of, “Okay, it could be worse.”

All in the Family – “Edith’s Christmas Story” 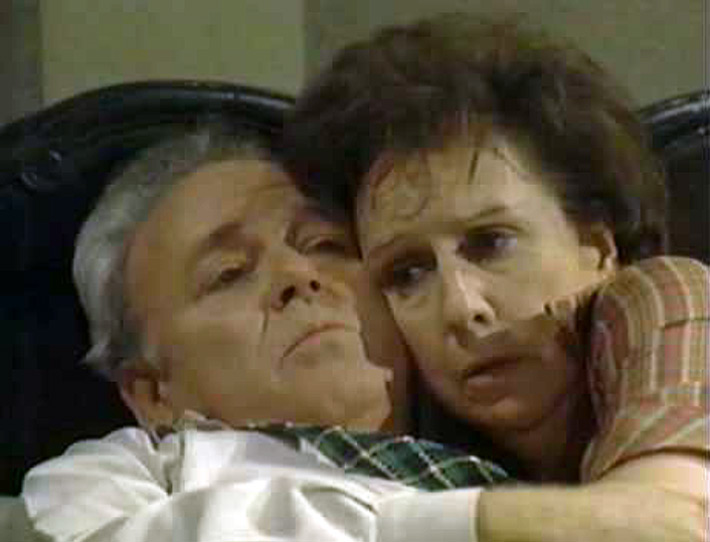 Looking for something to watch with a racist grandparent?

Perhaps the best way to get Grams to stop using what one could politely call, “outdated phrases” and reminding you about your waning youth is to plunk her down in front of the tube, put on the Closed Captioning and watch how AWCHIE and EATITH deal with breast cancer.

There’s even a little feminist rant from Gloria about the patriarchy of the present giving holiday. Of course, the argument is quickly snuffed out by the mention of the Virgin Mary. Applause sounding akin to a heavy rainfall trickles through the episode with the Scroogey Archie telling his “Little Girl” daughter and his “Meat Head” son-in-law to SHADDUP ALREADY. Try to remember this is supposed to be charming. This is the fifth Christmas in a row your Nana has proclaimed her last, so you know, just give her this.

Edith doesn’t get the CANCA, but she does get a visit from her husband in the hospital who, in the only emotionally stunted way he knows how, lets her know that he loves her.

It’s also a great way to remember to do your self-checks yourself on your mammary glands every once and a while.

A thousand years from now there will be children huddled around the aluminum pole, exhausted from wrestling their father to the ground, who will ask in the most nasally voices and with most cynical of smiles, “Where does Festivus come from?”

Someone will probably scold them for interrupting the “Airing of Grievances” and that will be that.

You have to give it to Seinfeld, for giving us the anti-Holiday that’s entered our cultural lexicon. Unlike most holiday episodes, “The Strike” doesn’t conclude with the warm and fuzzies. It just barrels through the absurdities that come with lying, cheating, and stealing.

The show flies in the face of the traditional narrative that the true meaning of the holidays is being with the ones you love. Because sometimes the ones you love can be, you know, just THE WORST.

With these suggestions, I leave you to whatever it is you have to do in the rest of your December. Happy Watching.

There are certainly quite a few holiday episodes that I’ve neglected on this list. Please tell us some of your personal favourites in the comments section below.