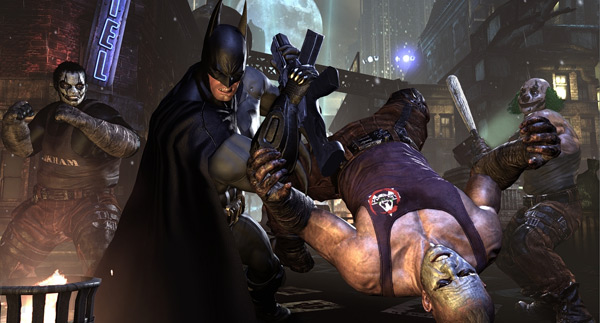 Over a year after the then-unnamed sequel to Batman: Arkham Asylum was announced to a chorus of applause, Warner Bros. Interactive Entertainment and developer Rocksteady have finally released a trailer for the sequel Arkham City that includes sweet, sweet gameplay for fans to devour and analyse.

Batman’s moves from Arkham Asylum appear mostly intact, along with some phenomenally-presented additions. Wailing on goons looks as fun as ever, including some fun sneaking head-bashes and an area-of-effect smash executed from jumping off the top of the building. Is Bruce Wayne taking notes from Bruce Banner?

Batman swings from rooftop to rooftop (and between streams of gunfire) with astonishing grace, and at one point glides away from a large clock tower as it erupts into flames. The Assassin’s Creed: Brotherhood vibes are more apparent than just the game’s scope, it would seem.

But the gameplay is just one half of the trailer, with some great appearances by Two-Face, Hugo Strange, a very Halle Berry-esque Catwoman and Mark Hamill’s peerless Joker. The direction and song accompaniment makes for a very Watchmen-inspired trailer, but for a game with a dark and sometimes self-aware setting like this, it seems appropriate.

Batman: Arkham City is currently scheduled for release on ]October 18 2011 on the PC, PlayStation 3 and Xbox 360.