Rocksteady Studios showed off a preview build of Batman: Arkham City at Microsoft’s X-11 event last week, and we had a chance to romp through a wrecked of Gotham’s biggest prison yard ever. Unsurprisingly, we left as excited as the previews and trailers have been making us over the past year, and then some.

Batman is on his way to the court house we’ve seen in previous trailers, following the trail of Catwoman. Environmental design shines here; angular hallways are filled with portraits of judges in silly white wigs and dour expressions, their eyes seemingly judging your every move. Climbing the stairs to the upper level, Batman crosses a tightrope above Two-Face and about two dozen thugs. The player can initiate the inevitable chaos any number of ways. Throwing an errant Batarang into the crowd doesn’t really give you any advantages, so instead we use the new dive-bomb mechanic to land right on top of one poor, unfortunate soul and send half a dozen others flying in a move that’s more Bruce Banner than Bruce Wayne.

Half the thugs flee in terror while a sizable group stays behind to beat to a pulp. Some of them mirror their head Rogue, clad in split white and black clothing and equally eerie half-white, half-black paint. The fighting mechanics in Arkham City shine here, expanding on Arkham Asylum‘s foundation. Batman weaves between the foes, countering attacks with the Y button, occasionally smacking two thugs into each other for a double-K.O. One enemy throws a wooden chair at the player, but a quick counter (denoted by the same “Spider Sense” symbol as a thug’s regular hits) allows you to catch it and hurl it back at the enemy, both chair and face exploding into splinters, eliciting one of many OOOHH’s from the crowd watching the screen.

“Try holding the left trigger and pressing A for the last guy,” the Rocksteady rep suggests. Batman shoots out his grappling hook at the last enemy, pulling him in Mortal Kombat Scorpion-style, then levels him with a scintillating clothesline.

Soon after, Batman and a newly-freed Catwoman are shot at by a sniping Joker from several blocks away. In order to determine the trajectory of the bullet, we have to set up a crime scene using the revamped Detective Mode. Two bullet holes are highlighted in fluorescent yellow, allowing the player to scan them in a very Metroid Prime-esque fashion. We then get a short cutscene that follows the trajectory to a bell tower a few blocks away. It’s off to the next objective. 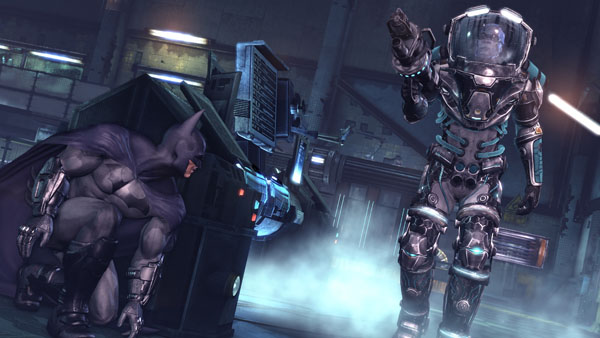 On the way to the tower we get a sense of just how big Arkham City is. Rocksteady claims it’s about five times larger than Arkham Asylum before it, but that hasn’t stopped the developers and design team from cramming it full of detail and character. Car wrecks belch out small fires in defiance of the dark and damp weather. Whole districts are barricaded off due to neglect or structural damage, and a small area designated for “political prisoners” is a slum within a slum, filled with despondent criminals standing next to flickering bonfires to keep warm. Snowflakes fall convincingly, even settling on your cape and cowl before melting away.

The mix of gameplay and procedural narrative really shined once we got to the bell tower – which wasn’t difficult, even in the gigantic prison playground, thanks to an unobtrusive compass-like indicator at the top of the screen. Walking straight through the front door, you’re faced with a group of Joker-branded thugs. From behind them comes a cartwheel-ing Harley Quinn, and within seconds you’re prompted to counter her attacks. A successful evade by the player throws Quinn to the ground, and initiates a short conversation between the two in a seamless transition.

Everything we’ve seen of Batman: Arkham City has proven just as fun and exciting as Arkham Asylum was, fulfilling the promises of the deluge of trailers and then some. Dork Shelf will certainly be there on release date Bat-time: October 18, Bat-Channels: Xbox 360, PlayStation 3, and PC.