Virtual Reality is at its best when it’s able to trick your brain into thinking you’re somewhere (or someone) else. Batman: Arkham VR is no exception. The upcoming game from Rocksteady manages to convince you that you’re Batman, which is extremely cool even if you are a more limited version of the character.

I had the opportunity to try Batman: Arkham VR at last weekend’s Fan Expo in Toronto, where Warner Bros. had a booth set up in the middle of the convention floor. The game was running on a PS4 outfitted with a PSVR headset, and while you have to stand in one place while playing, you are able to use your hands to interact with the environment thanks to the Move controllers and the PlayStation camera. It’s not quite room scale VR along the lines of the HTC Vive, but the VR is comfortable (I played for 20 minutes and could have played for much longer) and it is enough to give you a meaningful sense of space. 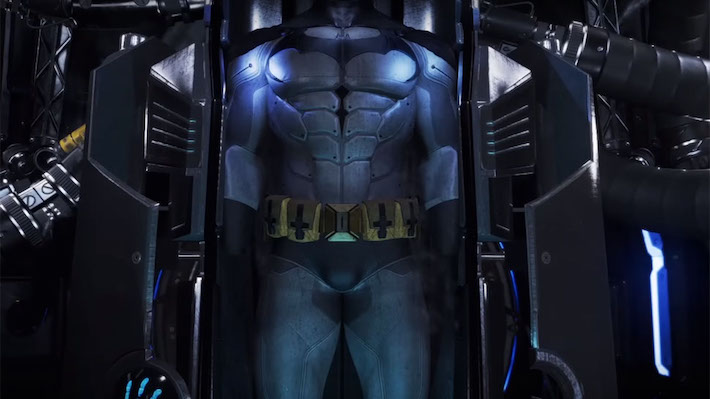 The demo itself opens in Bruce Wayne’s mansion, where the sheer size of his parlor conveys the billionaire’s sickening opulence and transports you more directly than any of his previous appearances in video games or film. Picking up the Wayne family photo on top of the piano is a much more effective way to deliver Batman’s origin story than the constant retellings we’ve been subjected to in recent years.

The real action kicks off when you open the piano and tickle a few keys to trigger a hidden elevator. The elevator descends into the Batcave, and it really does feel like you’re dropping straight down through the floor into a sprawling subterranean expanse lined with all of the high-tech gizmos you’d expect to find in that location. You use the Move controllers to reach out and put on each piece of the Batsuit before gearing up with a grappling hook, a detective scanner, and a full set of Batarangs before heading out into Gotham to fight crime.

That immediacy makes Arkham VR more than a mere novelty. Arkham VR is less ambitious than any of the previous Arkham installments, discarding the bone-crunching fistfights of previous Arkham games to focus on the investigative elements of the franchise. Batarangs automatically lock onto and hit their targets regardless of the direction they were headed when you threw them. If there is hand-to-hand combat, I didn’t see it in the demo.

Yet despite those limitations, Arkham VR is undeniably compelling. After suiting up, I went into Gotham to investigate Nightwing’s murder, using the scanner to reconstruct a fight that resulted in multiple broken bones and a severed spine (Arkham VR remains brutal, even if you’re not the one inflicting the punishment). Though I wasn’t able to walk around, I was able to jump to different vantage points with the Move controller. The ability to move through space gives the game texture, providing enough agency to make it satisfying when you put the mystery together.

The demo ended before I reached the end of that first case, so I can’t tell you much about the plot of the game at large. The gameplay is not overly complex and Batman’s scanner is a magic wand that does most of the work for you, giving you video playback even in the absence of the camera. You just need to point the scanner in the right direction and stop the video at predetermined points of interest.

Then again, Arkham VR is not designed to be a comprehensive sandbox. It’s a green screen trick, a gentle yet firm suggestion that you are now the Caped Crusader, and with the help of VR, it doesn’t take much to convince you to buy into the conceit. I got chills when I saw Batman staring back at me from a mirror, and then again when I looked down and saw all of the gadgets that I personally equipped strapped to my utility belt. I know that reflection wasn’t real and I only saw it because I was wearing a headset, but Arkham VR gets close enough to reality to serve as an immersive Batman simulation. I used a secret elevator to enter the Batcave before putting on a Batsuit and going out to patrol Gotham. Fake or not, that still feels pretty fucking great.

That’s ultimately why I walked away impressed with Batman: Arkham VR. It’s a simple game, and like many VR projects it’s a glorified point-and-click adventure that almost plays itself. However, you are able to interact with the world around you in deliberate ways, and that in turn makes it feel as if you’re controlling the narrative. That’s the vicarious thrill that Arkham VR is offering. Batman: Arkham VR feels like a genuine video game rather than a tech demo for VR, and that’s an exciting prospect for anyone who’s ever dreamed about being Batman.

Batman: Arkham VR debuts in October for the PSVR headset for the PS4.