‘Batman doesn’t kill’ has always been one of the central tenets of the character, but it’s been under fire thanks to Batman: Arkham Knight and a portrayal that seems to be even more unhinged than usual. Rocksteady’s latest version of Bruce Wayne uses the Batmobile to commit blatant acts of torture and (possibly) homicide while stretching the limits of survivability. Games Radar had a doctor look at some of the mayhem (spoiler alert: it’s a bloodbath), while Ben Kuchera wrote an opinion piece arguing that Batman is a murderer.

Needless to say, there’s been a bit of a backlash.

I’m not interested in rehashing the debate between comic books and reality, and I’ll concede that the Games Radar exercise is amusing but largely irrelevant. Yes, the force that Batman uses when fighting thugs would cripple an ordinary human being. Then again, the blows inflicted to Batman would easily do the same to Bruce Wayne. People in comic books – both good and bad – are more durable than they are in reality. That’s one of the concessions I’m willing to make for the sake of fiction.

However, I do think there’s merit in the discussion, if only because it forces us to re-examine exactly what a character like Batman actually represents. Because here’s the thing: for most of my childhood, I was absolutely convinced that Batman did kill people, and I distinctly remember being stunned to learn that he was a pacifist when I started taking a genuine interest in the character circa Batman Begins.

What’s more, I think my conclusion was perfectly reasonable, at least for a casual observer. The portrayal of Batman is so inconsistent that it’s astonishingly easy to get confused, which only underscores the importance of being careful and deliberate with the character.

I’ll readily acknowledge that I was hardly the world’s foremost authority on Batman. I didn’t read comics as a kid, nor did I regularly watch any of Batman’s forays into animation. That’s also kind of my point. Batman is ubiquitous, so I was aware that there was a character called Batman long before I knew what that character was supposed to represent, and something had to fill that void. Like most heroes, I figured he did what he had to and I never cared enough to follow up on the details.

In the meantime, I played some games, watched some films, and built a composite character distinct from anything in the official wiki. My impressions eventually coalesced around contradictory representations that were based more on the logic of video games and the visual language of violence in the media. 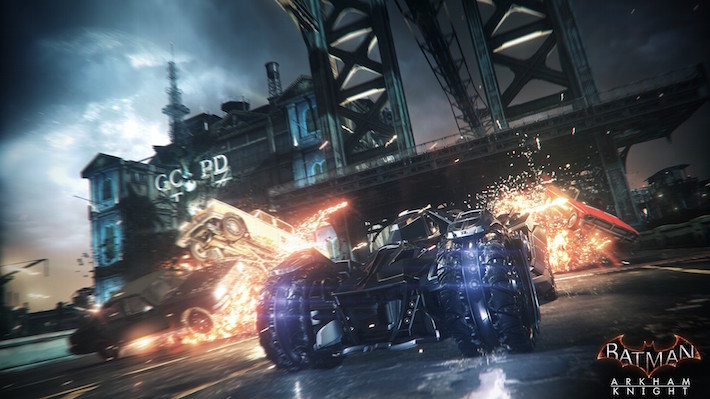 More specifically, the violence in Batman media is indistinguishable from the violence in other entertainment where people die. That’s especially true in video games, where death is tacitly built into the vocabulary of the medium, a hallmark of games for all ages where the elimination of opponents is used to signify forward progress. Even in Mario, you know the enemy is dead because it disappears, and the system is exactly the same in games like Contra and The Adventures of Batman and Robin or Arkham Asylum and Shadow of Mordor.

I now recognize the practical necessity of those conventions. Arkham Knight would become far too cluttered if defeated thugs stayed where you left them. I also have a better grasp of the Batman mythos, so I’m able to reconcile the mechanics that make the game fun with the symbolic ideology the developers are trying to explore.

But as a kid, I wasn’t yet capable of the mental gymnastics needed to grapple with the absurdity of Batman as metaphor. Everything fit within a more general framework of good vs. evil, so I just sort of assumed the enemies were as dead as they were in every other game I used to play. Until you’re explicitly told otherwise, the default is that bad guys die because that’s how the hero wins.

If you try to forget everything you know about the character and look only at the visual storyboards, the notion that Batman doesn’t kill people becomes downright laughable. Batman is as savage as any hero in fiction. After all, if we accept the idea that good characters kill bad characters, then why would Batman be an exception?

The answer, of course, is that Batman is different because his writers tell us that he’s different, but that’s only half the battle. I ultimately don’t care whether Batman does or doesn’t kill people because you can tell great stories with both versions of the character. My point is that it has to be consistent. If you want a vigilante that doesn’t kill, you need to depict a vigilante that doesn’t kill, or it comes across as lazy storytelling when you ignore the carnage that isn’t supposed to be happening.

The debate surrounding Arkham Knight is a good example of that kind of dissonance. A fantasy world with immortal villains makes some injuries more palatable, but there is a point at which you take the audience’s credibility for granted. George Lucas can keep telling us that Greedo shot first until his lips pucker and his face turns green, but Star Wars gives the lie to that argument. We know what we saw, and the truth belongs as much to the audience as it does to the creator.

By the same token, if we see Batman killing people, that means Batman kills people, and no amount of hand waving can erase the evidence we see with our own two eyes. I’m more than willing to forgive some brutal fistfights, but when Batman commits assaults with deadly weapons that he could not reasonably expect a person to survive, those decisions become part of the public perception of the character, especially for those who aren’t as familiar with the lore.

But it does mean that creators need to be more aware of the type of Batman they’d like to portray, and paying lip service to ‘Batman doesn’t kill’ isn’t enough to make it true. That stance willfully ignores all of the popular examples – including Arkham Knight and Tim Burton’s Batman Returns – in which Batman seems to be a killer, and it becomes a way to avoid dealing with the moral implications of the character. It’s the creators’ responsibility to address that ambiguity, and if they fail to do that, it’s not the audience’s fault if it gets the wrong impression.