When you get past the film’s standard romantic drama trappings, Beyond the Lights makes some pretty strong statements about the unrealistic expectations for female musicians and the lack of artistry in the industry. It succeeds in giving audiences the emotional payoffs it wants without falling into any tired storytelling modes.

Noni (Gugu Mbatha-Raw), with her power house voice and sexy body, has been groomed from a very young age to become a superstar and is on the verge of conquering the pop music universe. She should be on top of the world.  However, she soon finds herself on a hotel balcony ledge ready to give it all up in a suicide attempt. She’s saved by LAPD officer Kaz Nicol (Nate Parker), who’s on the fast track to a life in public office.  Two very different lives, but a lot of very similar pressures. They find themselves being drawn to one another with the natural desire to drop their public facades and be true to themselves.

Beyond the Lights is that kind of movie that surprises you, presenting itself as one thing that could be passably generic genre fare, but when you get just below the surface you’re rewarded with an multilayered story with moments of scathing commentary on the music business today and its hypersexual portrayal of women. 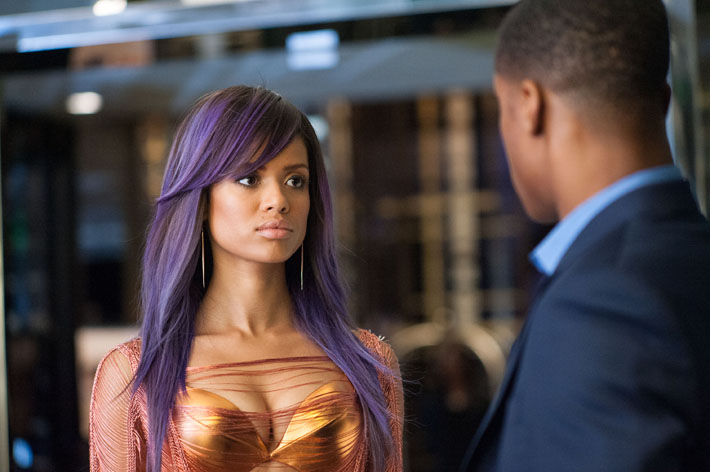 Writer and director Gina Prince-Bythewood (who did something similar with the equally underrated and surprising Love and Basketball) crafts a believable high concept romance along with a plea to the R&B and Hip-Hop community.  It’s flows with ease and confidence, never making any unnecessary dramatic or narrative jumps, keeping its characters it as grounded as possible within their crazy jobs.  Bythewood not only has a strong sense of character, but she adeptly shoots the streets of Los Angeles to make sure that the city never takes away from the story of the.

Mark it down right now: Gugu Mbatha-Raw, last seen in the period piece Belle earlier this year, is going to be a star.  She carries the screen and commands our attention, not only with her stunning beauty, but with raw emotion.  We get the guarded sense of self that is necessary for someone in the spotlight, but as we watch her tear down the walls of this character brick by brick, it’s like the blooming of a butterfly.  She carries her half of the movie with a shocking ease that you would expect from a seasoned actress, and it’s a marvel to watch.

You can tell when two stars aren’t acting (or at least acting very hard) as the chemistry that Raw and Parker is better than any other romantic pairing this year.  Even the most cynical of viewers can’t deny the attraction between these two characters.  Both actors take special care to make the material honest and truthful in spite of a few moments of obvious Hollywood convenience.

Minnie Driver as Noni’s mother Macy Jean gets one of her most inspired characters in years, delivering her best performance in quite a while.  She’s a rejected woman who had her daughter at an early age, and maintained a chip on her shoulder to ensure that she doesn’t get taken advantage or stepped on again, even if that comes at the cost of her daughter’s soul and sanity. Danny Glover gets a little less time as Kaz’s police father and mentor Captain Nicol, but his confidence provides great counter balance for his rising star police officer son.

Don’t sleep on Beyond the Lights. It’s the right blend of clever, original, classical, and cathartic that a love story needs to be, and it never shies away from its message or goes off topic.  Rarely do we get movies that are both crowd pleasing and smart in this genre, but this is masterfully subtle and effective storytelling that can give everyone what they want.