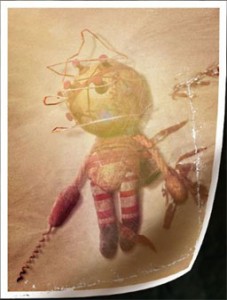 A new teaser site for BioShock 2: Sea of Dreams, There’s Something in the Sea, has been making the rounds online. It features a few documents concerning the kidnapping of a little girl by a red-eyed monster. The site follows a teaser trailer that came on the disc of BioShock for the PlayStation 3.

Sea of Dreams is the first of what could be five sequels to 2007’s BioShock. The expectations of fans and of 2K, the game’s publisher, are quite high. BioShock is one of the most highly-rated PC and Xbox 360 games of recent years. It was praised for its immersive environments and intelligent gameplay, and was a commercial success. BioShock 2 is not being developed by 2K Boston and 2K Australia, who created the first BioShock, but by 2K Marin, a new studio seeded with staff from 2K Boston.

BioShock 2: Sea of Dreams is to be released for Windows, XBox 360, and PlayStation 3 in late 2009. Developer IG Fun is working on a version of BioShock for mobile devices that is also to be released later this year.

BioShock 2: Sea of Dreams teaser: There’s Something in the Sea