So far, 2017 has offered enough to make any gamer envious. There are lots of quality titles, but it’s tough to justify the $80 price tag for Nioh, Nier: Automata, The Legend of Zelda: Breath of the Wild, and Horizon: Zero Dawn. Fortunately, there is a game that offers just as much action for only a fraction of the price. That game is Bleed 2.

A follow up to 2012’s Bleed, Bleed 2 is a twin-stick action game that keeps the bullet hell core of the original and fleshes it out with new mechanics, multiplayer, and a tighter gameplay focus. Developed by Toronto’s Bootdisk Revolution (aka Ian Campbell), Bleed 2 follows Wren, the purple-haired hero from the first game as she fights off a group of alien invaders.

The integration of a two-player co-op mode is the neatest mechanical addition to Bleed 2. The second player gets a yellow-haired Wren, and the game’s new parry mechanic allows you and your partner to deflect or nullify attacks based on their colour. Purple Wren can deflect purple attacks and yellow Wren can reflect or nullify the yellow ones (enemies spit yellow and purple bullets in roughly equal quantities). It borrows from shoot-em-ups like Ikaruga, where paying attention to colours is paramount. Working together and learning when to cover your partner and when to let them cover you is essential to the game. 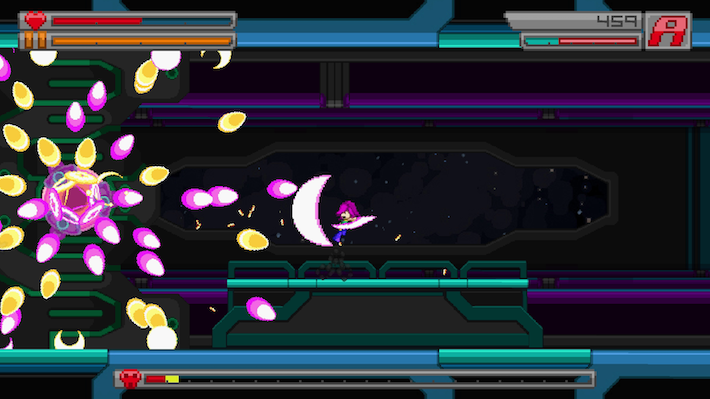 If you play single player, skill becomes more important because you’ll have to rely on your own abilities to survive. In Bleed 2, you can slow down time to dodge or parry attacks, and you also have a triple jump that lets you weave between enemies and bullets with either grace or dumb luck (I used more of the latter). Bleed 2 increases the enemy variety while pulling in some favourites from the original, and the combination makes for some spectacular encounters. I’m a big fan of the giant robot that you fight while falling between two skyscrapers, but there are dozens of boss fights that will test your speed and reflexes in a way that feels like something out of Metal Gear Rising: Revengeance. That happens to be a game that I have nothing but adoration for, and Bleed 2 nails the feel of high-speed third person combat in a 2D plane.

Though the campaign is relatively short, the excellent combat gives Bleed 2 endless replayability. You can unlock half a dozen characters as you play through on harder difficulties, and there are also mutators that let you experiment with features that make the game harder or easier, including Zero-G, invincibility, and un-blockable attacks. One mutator allows you to see the hit boxes for you, the enemies, and the various attacks. For instance, I was able to see that enemy bullets lose their hit boxes when you deflect them, so they can no longer hurt you or your partner. It’s a nice touch that gives you a glimpse of the development process and lets a layperson see how the levels are balanced.

Bleed 2 also offers challenge modes that let you take on any combination of up to four bosses at any difficulty. It’s a great way to get more comfortable with the mechanics (it really teaches the importance of controlling screen real estate) and enemy habits. Despite the fast pace, Bleed 2 has impressive accessibility options that allow players to adjust screen shake, screen flashing, and colour tone to give players more options to enjoy Bleed 2.

Overall, Bleed 2 makes for an awesome weekend (and maybe more) as you try to complete it on harder difficulties. If you’re looking to enjoy a bright, polished, and positive game with a forgettable yet silly narrative, I can’t recommend it highly enough. Bleed 2 is now on Steam now for $11 and it’s worth every Canadian dollar.