Eddie Huang’s directorial debut Boogie stars Taylor Takahashi as Alfred ‘Boogie’ Chin, a New York City high school basketball star with his sights set on the NBA. He has the on-court talent, but talent is the least of his problems. His dad’s a flake, his mom is overbearing, and Boogie’s attitude problem causes a rift with his teammates.

Despite his otherworldly talents, no Division I college will offer Boogie a scholarship. But if he can outplay his crosstown rival Monk (Bashar “Pop Smoke” Jackson) and win the big game, the scholarships will start rolling in. All the while, Boogie struggles to focus on basketball due to pressures at home. Fortunately, his down-to-earth new girlfriend Elanore (Taylour Paige) keeps him grounded.

I have mixed feelings about Boogie. Right now I’m split 50/50 between being entertained and feeling frustrated. When I’m on the fence between a positive and negative review, there’s a question I ask myself. If I went back in time to right before starting the film, would I tell my past self to watch the movie or skip it? I asked myself this question about Boogie a few days back, and I’m still making up my mind. I will work my feelings out, stream of consciousness style, as I write this review.

Boogie features an intriguing concept, a wonderfully diverse cast, and a fresh perspective on the classic American underdog story. Boogie could be this generation’s Rocky, but Huang doesn’t make good on the story’s potential. Everything about this picture comes off as a cliche and watered-down version of much better films that came before it.

Boogie doesn’t work as a sports flick, and it’s a middling family drama. It feels like Huang is working off the first draft of a clumsy script. There are a few cool beats here and there, but Boogie’s underbaked screenplay and weak characters hold it back from greatness. It also looks like the people making the movie don’t give a damn about basketball, which is a massive problem in a story about a basketball phenom.

The people in Boogie’s life are shallow and uninteresting – sometimes both. They’re not living breathing people so much as pylons blocking his path to the NBA. All writers use their characters as hurdles on the hero’s journey. The great writers flesh these people out, which helps disguise their function in the plot. A three-dimensional character with a strong point of view feels like a person and not a chess piece. You may not agree with these antagonists, but you get where they’re coming from.

Characters in this film only have one goal; to stand in Boogie’s way. They come across as selfish jerks instead of people with valid reasons to see the world differently. In too many cases, characters stand around telling us what they think in feel when the story should be revealing their intentions through their actions.

Cinematographer Brett Jutkiewicz does a magnificent job capturing New York’s vibrant energy. I enjoyed how Jutkiewicz’s camera takes its time soaking up New York’s bustling streets as the bouncy hip-hop score elevates the striking visuals. But this frenetic energy doesn’t course through the entire film. Too often, dramatic moments suffer from stagnant and unimaginative compositions more inline with daytime soaps than feature films. And don’t get me started on the ballin’.

Any film about a basketball star better bring its A-game on the court. But Boogie shockingly falls short in this area. Above the Rim and White Men Can’t Jump hit theatres decades ago, and the thrilling on-court action in those dusty old flicks puts Boogie to shame. You could record an actual streetball game and capture more compelling highlights than we see in this movie.

Boogie’s basketball sequences lack drama, tension, and highlight-reel moments. The film relies on too many closeups of guys blowing by defenders for easy layups. We’re not asking Huang to recreate the final game in Hoosiers. But respect the New York City high school point guard legacy. Boogie represents the evolution of guys like Kenny Anderson, Mark Jackson, and Stephon Marbury. I don’t recall a single shot in Boogie worthy of an And 1 mixtape.

Boogie speaks to an issue most POC relate to. We get so sick of people labelling us, othering us, and making assumptions that it changes how we present ourselves to the world. Some people double down and embrace their roots by flaunting their native culture and doing little to assimilate. Others do all they can to distance themselves from the stereotypes white people thrust upon them. Either way, these choices are reactions to the white gaze.

Boogie fights to distance himself from Asian stereotypes, and as a result, becomes a different type of caricature. I grew up around many young men like Boogie (Filipinos, whites, and bi-racial guys in love with hip hop culture), so I could relate to his struggle. 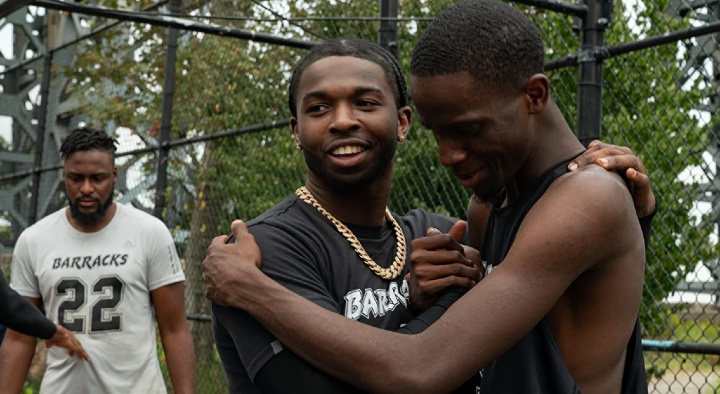 People conflate race and culture. Black is the colour of one’s skin, but hip-hop is a culture. If you grew up living and breathing the culture – listening to Black Star, rocking Adidas kicks with fat laces, and tagging any surface with a fresh coat of paint – are you appropriating black culture or embracing the only life you know? Boogie is fine being a stereotype, just not the one that people thrust upon him.

Here’s the problem: this movie about identity, culture, and representation paints its supporting characters as shallow caricatures. To do this story justice, the screenplay must approach its themes with nuance and compassion, which isn’t the case.

The story’s one-dimensional antagonist, Monk, comes off like he was cooked up in a fear-mongering Fox News segment about “Black Lives Matter anarchists.” Sure, Boogie’s victory won’t feel earned unless he goes toe-to-toe with a threatening opponent. But in reality, Monk is just another black body being used as a steppingstone in pursuit of the American dream.

Boogie shows the telltale signs of a first-time filmmaker still working out the kinks. It hits the beats I want from an underdog film and a coming-of-age tale, but each plot beat feels so generic and by the numbers that the story kept me at a distance. I’m intrigued by Huang’s creative vision for this picture, but its clumsy execution kept me from loving the experience. Boogie has swagger to spare but lacks soul.