As you might have heard, this week the entire Marvel Cinematic Universe will engage in a superhero battle royale on a blockbuster scale. The roster of heroes primed to duke it out is so extensive that even a Canadian will be joining the battle. That would be Emily VanCamp the actress who came to prominence in the popular TV series Revenge but before then had popped up in everything from The Ring Two and Law & Order to YTV favourites like Are You Afraid Of The Dark and Student Bodies. VanCamp entered the MCU in Captain America: The Winter Soldier as a character known only as Agent 13, but of course comic book fans always knew there was more to the story based on her code name alone.

Agent 13 is of course Sharon Carter a long lost relative of Agent Peggy Carter who previously tore up Captain America: The First Avenger all the way to earning her own TV series. In the comics, Cap n’ Sharon eventually engaged in a love affair with only the subtlest of creepy intergenerational undertones. Now that the Carter cat is out of the bag in the MCU, it just might be time for that to happen on the big screen as well, which is nice given that Steve Rogers has so many superheroes gunning for his pretty little head. A lil’ love story could go a long way. In advance of the sure-to-be-massively-successful Captain America: Civil War, we got a chance to chat with the delightful Emily VanCamp about her growing roll in the Marvel landscape onscreen and off. We also obviously asked her about Are You Afraid Of The Dark, because it would have been irresponsible not to.

Has it been tricky for you to maintain a certain ambiguity about your character’s relationship with Peggy Carter in the MCU up to a certain point given that it’s such a defining part of Sharon Carter’s character in the comics?

I think anyone who knows the comic book knows that there’s a relationship there. And now in the cinematic world, we’ve made it clear that she’s her great aunt. Which I think that extra generational gap makes it slightly less creepy in her relationship with Steve (Laughs). But I also think it makes sense because they both share a mutual love for this women who really impacted their lives and meant so much of them in very different ways. So in a way, it really bonds them. Which I think is really sweet. So that’s kind of my perspective, but some people have a different opinion of their relationship.

Do you ever get any superpower envy amongst your cast mates as one of the few purely human characters in this universe?

I guess maybe sometimes. But I also kind of like playing a real and rooted human in this heightened universe. There’s benefits to that too. And you know, you look at Black Widow, she doesn’t have any powers either and that doesn’t stop her from being super badass. I think Sharon is a version of that as well. So, no I don’t feel like that’s a necessity.

Sharon and Black Widow are interestingly similar characters in the MCU. Is there any challenge on your part to help define your role against hers so that you have your own path to travel in the series?

I think they both are from completely different backgrounds. There’s just no way that you could mix the two up. Even in the small amount of fighting that we both do in this, they both have very different styles. I don’t think they could ever be the same. But it was so cool to get to see Scarlett do her thing. She’s obviously been part of this world for quite a while now and some of my favourite sequences so far have been hers. That’s why the superpower thing doesn’t bother me. You don’t need them. She’s proven that all you need is a chair and some heels (Laughs). Those truly are some of my favourite parts of these films. So it was very cool to do a sequence with her, but no I’m not worried about our characters becoming too similar. 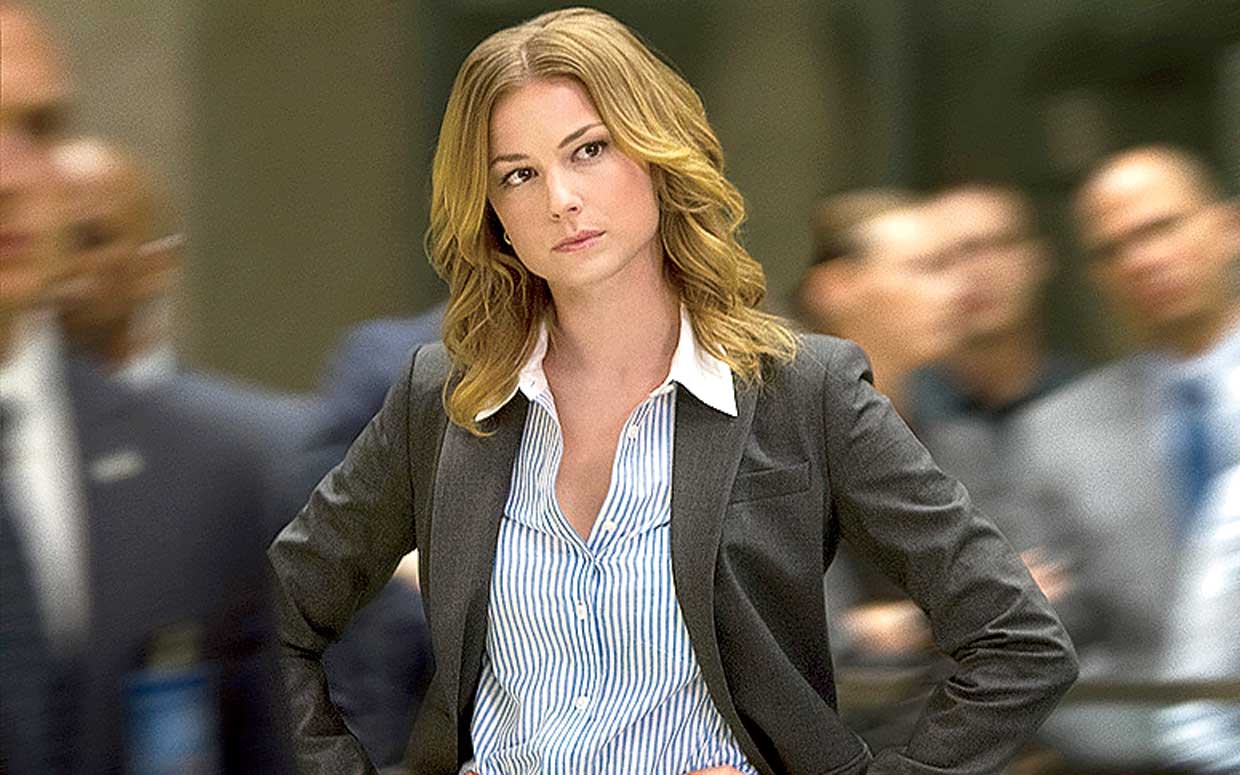 Yeah, it must have been nice to get a chance to engage in some ass-kickery this time. How did you find that? Was there much training?

I’ve done so much of this for Revenge, there were a lot of physical fighting sequences there which lent itself well to joining the Marvel movies. I felt much more prepared going into this movie. It was great. We actually had no time to shoot it and had never even rehearsed it. I went in having no idea what we were going to do. Then we warmed up for 10 minutes and figured out what I could still do from a ballet background that ended a looong time ago (Laughs). But it was really fun. We have a great stunt team to work with. But I think having a TV background helps when you need to work under pressure with tight deadlines. So it was also really fun. I had a great time with it.

Do you have any personal preference for a huge blockbuster like this versus an independent film?

I like them all for different reasons. I went straight from this into a very small French Canadian independent film. And that made perfect sense for me because it’s always about the characters that you’re playing and the process. Some of them have big budgets and some of them don’t, but it’s more about the characters for me. And actually that movie pays was one of my favourite experiences to date and I got to come home and shoot in Montreal and Newfoundland. So you know, it’s all fun for me. Obviously doing a film is a tremendous learning experience and a chance to work with people who you’ve admired since you were a kid. It’s pretty epic. It’s amazing just to watch these people work. You learn so much. It’s incredible.

Is it tough to stand out in a cast and crowd that large?

I think you really have to learn to find your place. I can be quite shy and I tend to want to retreat at times, especially in big groups like this. But also, it’s great not to have all that pressure on my shoulders as well and just sit back and learn and watch the experience. Especially after four years of Revenge where that really was all on my shoulders. It wasn’t something that I took lightly. I invested a lot of myself into that character and into that show, which was a wonderful experience, but also I have to say a very tiring one. So it was nice to get to show up and take it all in. I really admire Chris and Robert for taking that on, because this is a whole other level of responsibility. But I think everyone involved in these films knows that you’re in really good hands, especially with the Russo Brothers. They’ve proved over and over that they can do a hell of a good job with these sorts of films.

(Laughs) I don’t remember working on the set of Are You Afraid Of The Dark to be honest. I just remember there was a scene with a cup of tea or something. But you know, you’ve got to start somewhere.

Didn’t every Canadian actor have to appear on that show?

I think so. It’s a right of passage. Like doing Law & Order. And I’ve done both.

As your career is growing outside of these movies, how does it affect your ability to chose other roles knowing that you’re going to be called back for these?

I don’t think I would ever base a decision for upcoming jobs on that. I would know whether I was going to be in something that was shooting or now, like the upcoming two-part Infinity War or something like that. So we’ll see. But it doesn’t inform which other jobs I take at this point. They’re pretty flexible too. If they can get all of these characters and actors together for Civil War, and I don’t know how they did, it’s mind boggling to me, then they’ll find a way to make most of these things happen. But yeah, I don’t think you can just wait around for the call. You never know.

This is kind of a silly question, but have you had any experiences with jealous fans because of how close you’re able to get to Chris Evans?

Oh totally. I’ve had a whole different level of tweets these days. But I find it quite funny actually, because I’m treated like I’m personally with Captain America, but I’m playing a character. You have to remind people of that some these people that I am not actually Sharon Carter. I’m Emily VanCamp and Chris and I are just buds. It is another level of fandom, I guess. But it’s great as well. I don’t take any of it personally, you can’t. It’s nice that the fans are so passionate.

In March, you and Elizabeth Olsen helped launch the “Girls Reforming The Future” program for Marvel which is great. Could you talk a little bit about your involvement in that initiative?

We actually got to meet the five finalists at the Civil War premiere, which was amazing. You look at them and their so young and you think, “Wow, the places you’re going to go. It’s amazing.” It’s just an initiative to get girls involved in science, technology, and math. There is a world in which those seem intangible for young girls, so it’s a way of encouraging them to step into it and show us what they’ve got. They are extraordinary girls and I think it’s great that Marvel is backing that initiative. It’s very cool.

And of course, are you Team Cap or Team Iron Man?

Well, personally I’ve seen the movie a few times now and I’m left on the fence by it. I totally understand where they are both coming from. Tony’s got a point. And let’s be honest, it’s Captain America who is going a little bit rogue in this, which is interesting because we think of him more as a rule-follower. But you see both sides in this and that’s makes the movie more interesting.

Next Article »
The Flash Episode 2.20 Recap