Nothing displays the strengths of Community like a bottle episode. It’s a sentiment I’ve shared before, and I know I’m not alone in holding it, but it is appropriate because “Advanced Advanced Dungeons and Dragons” just further corroborates that statement, by heading back to the territory that makes this show and its cast shine the brightest: Abed’s dice, graph paper and Dungeon Master’s Guide.

For a show that constantly has its diverse cast solving problems of the imagination through communication and empathy, a game of Dungeons and Dragons is the most direct real life analogy that can be used to summarize it. Now that an equilibrium has been established with Community’s new cast, putting them all in the same room to collectively imagine a fantasy adventure is the perfect test to see if Dan Harmon’s creation still packs a metaphorical vorpal blade.

As always, we start off at the Table Mk II, and Dean is asking about insurance for Greendale. Chang knows how to get some on the streets, and Hickey – reading an email on his laptop – spouts his character catch phrase, “What the hell?”

It’s not because he has something against street insurance, as Chang is quick to accuse him of, but because he just found out that he hasn’t been invited to his grandson Sebastien’s birthday on account of his son Hank, who is not the one that got gay married some time over the Olympics hiatus this year, but rather the one who will become this episode’s new Fa…-bulous Neil. Also he will be played by David Cross and make everyone watching extremely filled with smiles.

Buzz describes his estranged son as the kind of man who plays that game about dungeons and dragons. Sensing a great chance to fix an emotional wrong through the liberal application of dice and good will, Annie jumps at the chance to suggest that they Dungeon and Dragon the Hickey men back to speaking terms.

Abed suggests that the last time they did this was slightly exploitative of Neil, asking if anyone else felt that they got perilously close to pushing him to commit suicide rather than realize his own strengths and conclude that life was worth living. Jeff dispels the doubts of the group, pointing out that Neil went on to live a full and fulfilled life in the background of scenes like the one taking place at that very moment (Neil is framed walking around over Jeff’s right shoulder the entire time he’s being talked about).

Everybody is down, including the self-invited Dean Pelton, who finally gets some substantial screen time in a season that he has consistently peppered with laughs despite making very few appearances.

We get a custom title card with an alternate title: “Community: The Return of them Playing Dungeons and Dragons.” 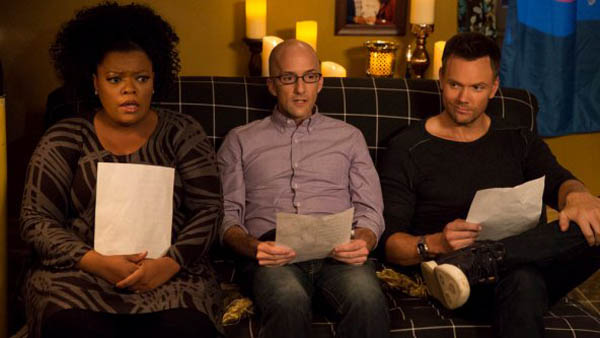 Annie and Abed’s apartment is where the duration of the episode takes place. It is warmly candle lit and decorated as always with Community-universe nerd merch. An Inspector Spacetime poster featuring a red police box is on the wall behind him as Hank attacks Abed for allegedly leading the group through a story and not providing them with the proper amount of freedom a well managed game of D’n’D should offer its players.

Hank also figures out the plan to narrate him into a father-son reunion and redistributes the character sheets at random so that he and Buzz aren’t imaginary father and son. This leads to setting the social landscape that will be navigated through the rest of the half hour, and its an important detail too. In a Community bottle episode all we have are the characters and our imaginations, just like the people on screen.

The character sheets, despite being shuffled, end up in all the right places for laughs. Annie gets to reprise her season two role as Hector the Well-Endowed, Chang is cast as Dingleberry the Troll (his mom’s nickname for him was also Dingleberry), Shirley is a druid, and Jeff and Dean are Rigg Diehard and his son, Joseph Gordon Diehard, respectively.

When reading his character description, Dean chokes up before getting to the end about the greatest weapon being the bond between father and son. It’s hilarious and illustrates exactly why he is such an asset to this kind of episode (and the show in general). Dean’s emotions are so close to the surface at all times, he can’t help but fully immerse himself in the happenings of even the most frustrating game of Dungeons and Dragons. This emotional explosiveness constantly pays off throughout the 22 minutes, never getting even remotely close to wearing out its welcome.

What’s crazy is that despite Jim Rash’s delightful clowning, I can’t say that anyone in the ensemble is outperformed. Like I said, nothing displays Community’s strengths like a bottle episode.

David Cross tries to break the game, but he misjudged Abed’s commitment to being a perfect Dungeon Master. Hank has his character try to move in the opposite direction of where the narrative would have him reunite with his real life father through fantastical dice-based teamwork.

Abed assures the disgruntled player that there is in fact a world to the South, and drops some serious ownage on the younger Hickey in the form of a mountain of campaign-building paperwork. In Dungeons and Dragons you are only as powerful as your imagination can allow you to be, and Abed is the human embodiment of taking fake things seriously.

Annie (or Hector, depending on whether you’re watching with your mind’s eye or your physical ones) tries to restrict Hank with friendship, carrying his character back onto the bridge they all need to cross, but with a defiant fire spell (Torven’s Flesh of Fire), the bridge is destroyed sending the pencil and paper heroes into the icy Skull River where they are forced apart.

At this point, after Jeff tries to intervene with a patented Winger game-saving-speech, Buzz sets the stakes. It is going to be a race. If Hickey senior can get to the Black Tower and defeat the Necromancer (“Necrophile” to Buzz) then he gets to go to his own grandson’s birthday party, but if Hickey junior beats him to it, the old criminology professor will be spending Christmas and Thanksgiving alone, presumably working on drawing Jim the Duck from a ¾ perspective.

Abed separates two parties into separate rooms (Dean screaming to Jeff, “I will find you!”) and Buzz translates his personal stakes into physical ones.

“If we lose, I’m gonna punch each of you in the heart.”

In the second act, Jeff, Annie and Shirley teach Buzz how to use his imagination. Hickey is playing as a halfling, and it doesn’t suit his violent real life past (“I didn’t scamper in the jungles of Nicaragua and I’m not gonna do it now”).

The issue is, his real life experience of heart punching isn’t applicable in an encounter with hobgoblins. Abed underlines this, telling Buzz that in order to succeed in this game he is going to need to exercise some practical empathy by reading his character sheet and understanding the rules his son already plays by.

Shirley is taken out by an imaginary arrow and forced to leave for real.

“I may be gone, but just remember whenever the wind whispers through the woods… you got me killed.”

In the other room, while Annie is looting Shirley’s corpse and Buzz is letting the reality of imagination sink in, Dean is fully selling his character. He understands Hank’s daddy issues through his strange love for his own imaginary father, Jeff. The group is ambushed by a clutter of sky spiders but they are saved through the power of Hank’s “Speak With Monsters” ability.

Outside of this beast taming, teamwork starts to happen as Hickey understands the rules of this game on his own terms. His band of Necromancer hunters have tracked the fleeing hobgoblins that killed Shirley to a shack they’ve been hob-guarding. He discovers these creatures can speak and captures two of them alive.

Thus begins a wonderfully presented prisoner’s dilemma with just one prisoner. Community is always well shot, but the framing during Hickey’s interrogation of Abed’s goblins brings an A-game to the playing field of TV sitcoms, where more often than not efficiency is favoured over style.

Danny Pudi kills it, reprising his little critter face from the original RPG episode in season two, only this time he adds in enough subtlety to differentiate between two different hobgoblins as they are slowly turned against each other, eventually yielding the direction to the Black Tower.

This moment is followed by David Cross singing in what might be Elvish as Dean again competes for the biggest laughs with a monologue about his character’s plight. He has been attempting to send messages to Jeff via sparrow, telling him about the magical sword halves that they share designed to act as beacons if one rubs the blade while the other rubs the hilt (“Each night I will think of you and rub.”)

The notes – each lovingly tied with a piece of Dean’s actual, slowly diminishing shirt – have been ending up in the trash, but with a critical hit rolled by Abed, one miraculously makes it through to Joseph Gordon Diehard’s father.

Both parties know that the other is on its way to the Black Tower, each led by an angry and self-righteous Hickey. What started as a race can only end in war. We cut to commercial.

Coming back from the break both groups have reunited in front of the Black Tower, ready to fight for the right to kill the Necromancer and thus dictate the terms of the next three Hickey family celebrations.

Dean is overcome with love for Jeff and goes to hug him, but he is skewered by his own father’s sword. The dying imaginary-son-would-be-lover presses on down the blade and embraces Mr Diehard, sparking an all out battle of shouting, gesturing and Annie swinging a massive invisible penis.

They all fake die except for Jonathan Banks and David Cross.

The two race through the halls of the dark tower but the Necromancer escaped. Feeling cheated, the Hickeys demand an ending that they feel they deserve. Abed won’t give it to them and we don’t get one.

Unlike the first time Community locked us in a room with everyone while they took pencil to paper in order to save Neil’s life, “Advanced Advanced Dungeons and Dragons” has no Pierce Hawthorne playing a hyperbolic villain to unite against. This episode is about slaying the metaphorical old naked lunatic called “communication problems” riding an invincible dragon named “family ties.”

The objective is achieved by the end, even if the narrative isn’t. Jeff leads everyone out of Hank’s apartment leaving the father and son to communicate in the only way they know how: by talking over each other and arguing about nothing. At least they’re doing it in the same room using the same language.

At its best Community illustrates how learning to overcome obstacles of a crazy and nonsensical world can bring different people closer together. “Advanced Advanced Dungeons and Dragons” does that with about two laughs for every one second of airtime without leaving its primary location.

Final Grade: 190,000 experience points and a recording of David Cross singing in a fantasy language