Well, they did it. For the first time in the history of Greendale Community College an organization created and supported by the madhouse of an educational institution actually finished what it set out to do.

The Save Greendale Committee has actually saved Greendale.

The story that is season five of Community is coming to an end, and “Basic Story” has started to tell us why it has been so important. Showrunner Dan Harmon, like a one man Save Greendale Committee, has returned to a ruined school and turned it back into the place we most want to visit on Thursday nights. What happens next?

When we open on “Basic Story” Annie is pinning the two final paper stars on the bristol board of achievement asking the same question. The gymnasium has been exorcised of its demons and someone needed to make more “to do” stars. Or did they? By the looks of things in the study room there are no more tasks for the group to team up and solve.

They have a lull and Abed doesn’t like it. Silence on TV, to him, is the calm before the storm, but everybody else sees it as a well deserved bit of contentment. Dean breaks the silence over the PA system, but it’s an accident so he just tells everyone that he loves them.

“We love you too,” chants Greendale in the chorus of a school united, echoing the thoughts of the audience. We love Dean too, and it’s going to be sad saying goodbye.

Not that we have to say goodbye. We don’t, at least not yet. We can live in denial just a little bit more.

“Basic Story” is the first part in one of Community’s rare two episode arcs that will be concluding with next week’s season five finale, “Basic Sandwich.” This part-one puts all of the pieces in place for a crazy final episode of what has been a transformative season, without giving itself completely to the service of its second half. 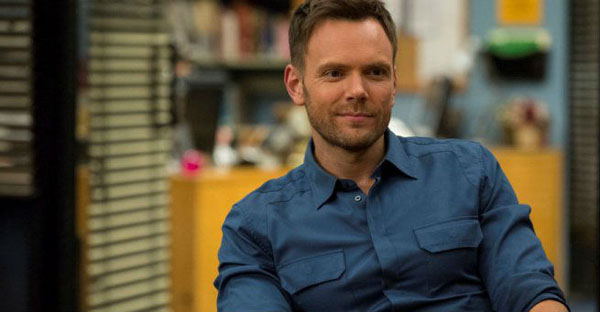 That is to say, “Basic Story” is contemplative in a way that makes it feel whole, setting the stakes by showing two case studies of a Joseph Campbell style hero journey. This is great, because in a two-part finale all any sitcom is every beholden to do is to deliver laughs and set stakes, traditionally leaving the allegory to the final act of its partner. The message here is a perk that comes from watching an episode of Dan Harmon-made television.

Immediately after the title sequence, the drunks from the school board (stand-in NBC network caricatures) pay a visit to Dean Pelton and let him know that an insurance appraisal man will be evaluating the college as to how much of a liability it is.

Back in the study room, thirty minutes of independent mobile gaming time has passed and Abed is really starting to feel the anxiety of success. The group has never sat this still or been this silent ever. He is just waiting for the other shoe to drop.

Dean enters with a call to adventure, letting everyone know that the school is to be scrutinized. Abed runs with this, trying to fill the emptiness of his off-brand Candy Crush playing peers (and Chang who is actually button mashing on mobile software for some kind of irrigation equipment) with a problem of the week.

Jeff calls it like it is: the group is addicted to crisis. Abed fulfills this with a proposal that the Save Greendale Committee should engineer an elaborate scheme to have the school over valued by making it look like it has an award winning physics program. He instructs Dean to learn Swedish and then meets Jeff in the hall as the episode presents its clever conceit.

Abed accuses Jeff of dragging him through the stages of a Joseph Campbell monomyth, because he can’t understand reality outside the frame of a TV show. Jeff tries to come off as sounding reasonable, lobbying Abed into to seeing that there is no story now that their job is done.

It makes sense, since the goal that they set out with at the beginning of the season has been successfully checked off, but the irony is that this is actually a TV show and the characters are really being dragged through the stages of a monomyth.

And so begins Abed’s delightful meta hide and seek, set up to be the initiation part (phase two) of his hero journey.

“Let the lack of story -” and then he runs out of frame mid-sentence, leaving the camera to loiter on a guy slurping on soup. 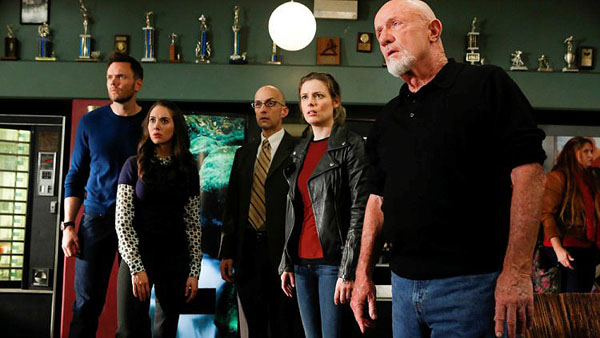 Jeff is having trouble accepting his own role in the story as he and Annie help Dean prepare for the valuation, Winger reassuring everyone that whatever is going on (not a story) is going to be about as boring as when Britta dated Troy. It’s a dig at one of season four’s more egregious eye rollers in terms of manufactured stakes, and the clear over-reaction of a man running from his calling.

This is all made into expressionist meta-fun as Abed, now a walking epsiode allegory, is chased through the halls by the camera, literally running from the story he’s been told to deny after throwing it to the teacher’s lounge in a hilarious “hey look over there” misdirection play.

Outside the school, Michael McDonald of MADtv fame (but I like to remember him best as the voice of Gandhi in Clone High) has shown up as Ronald Mohammed, the appraiser. He blabbers on about the semantics of what he is looking for (the city defines any living entity with four legs and a tail as a dog, qualifying raccoons, mice, mountain lions and bears as simply different sizes of canine).

Shirley calls Jeff out on his denial, which he of course denies having, and Mohammed appraises the stairs thoroughly while quoting Dante:

When we come back to Abed, the camera obviously finds him as he hides around a corner. He can’t run from it, there is always a story. Just when he falls down and gives up, assuming that a lack of resistance will kill the story, the meta mono-hero is visited by a supernatural figure in the form of himself wearing a white beard.

“Keep fighting the story,” he tells himself, fulfilling what is known in a hero journey as the atonement with the father. “Keep fighting it until it falls apart.”

The other magical man – the guest star trying to put a value on the school that the Save Greendale Committee built back up – finalizes the appraisal by testing the steadiness of a vending machine in the cafeteria (“In the US, each year, six people die this way, and five of them are insurance appraisers, so I take this very seriously”). It doesn’t fall, leaving Ronald Mohammed to label Greendale as exactly what our reluctant heroes have turned it into: an actual property asset.

Starburns hits play on a CD player loaded with Dave Matthews Band and everyone dances with school pride. A third party has done the unthinkable and bestowed a compliment on the one thing that defined their personality quirks as failures to the outside world.

The very moment that Ronald Mohammed has validated everyone by giving their school real value, Greendale is taken away and sold by the school board.

It hits Jeff just as its supposed to in these kind of stories.

“We saved Greendale,” he says. “Now they’re gonna sell it.”

Abed returns right at this moment, announcing that he has reached a state of purity, having gotten rid of all the stories. 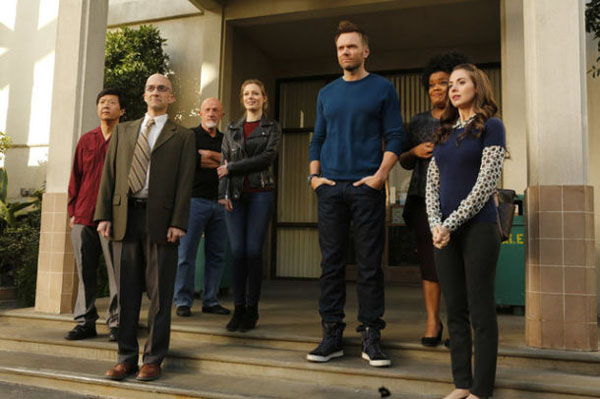 Coming back from commercial, the enemy has taken over. The Greendale flag is taken down and replaced with the green, white and yellow standard of Subway. The library is now a Subwayary and corporate sponsored weight loss legend Jared is signing autographs around campus.

The refusal of the call to adventure is responsible for the terrible state of Greendale. If the group had only listened to Abed and tried to fabricate a physics program based around a particle accelerator made of Kleenex boxes, Greendale would still be regarded as a place for maniacs, considered worthless and still in their lonely hands.

Around the Table Mk II, Annie suggests a hashtag activism campaign, but it has no traction. Abed suggests that a buried treasure plotline might solve the group’s problems, but the overwhelming feeling is that of loss. Chang clinches the deal, betraying the group in a final act of malfeasance, revealing his allegiance to Subway and strutting out of the room to “get paid,” as he sings the five dollar footlong jingle.

The school board dudes are showing the new owner of Greendale what he’s purchased and accidentaly walk in on a 90 percent naked Dean, curled up on the floor of his office covered in his own tears. The school was his whole i-Dean-titiy (see?) and now Abed and Annie are helping him pack up his stuff for the last time.

As they put things in boxes and Pelton literally labels himself “Bad Dean” (right across his forehead using an unused label maker), Annie and Abed ask about a legendary computer professor (who had sex with a computer and died of the first computer virus), whose picture hangs on the office wall sporting the plaque, “The Truth is Behind this Picture.” 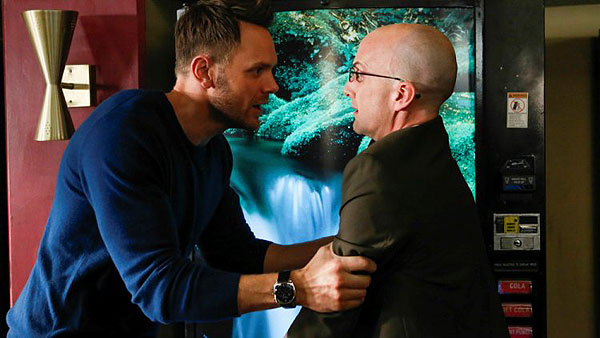 Dean never thought that the message was literal, but when his pals take a look they find a scroll.

Meanwhile in the old study room, Britta is sadly listening to her iPod nano (the one Pierce left her) when Jeff comes in for a heart to heart. Abed and Annie might be a part of the “adulthood begins at thirty generation,” but these two can see the realistic writing on the wall. Truth be told, they’re looking forward to the sanity of the real world.

Jeff proposes to Britta, and just like when he did it in season two, it is a move of desperation. In Winger’s mind, if these two get hitched it can keep the past five years from being pointless.

Just as they are about to christen their maternal promise, and the new study table, the call of adventure barges in to interrupt. Annie, Abed and Dean wave around the scroll they found, dancing and chanting two magical words:

Leaving on this note, “Basic Story” has done a lot in 22 minutes. It has set up the stakes for the finale while simultaneously showing us the weapon that will be used to overcome them and giving the requisite laughs we take for granted from a show of Community’s pedigree.

As Abed shows the transformative power of accepting the call to adventure, Jeff’s screentime illustrates what happens when that call is ignored.

Television with story is transformative and full of truth and laughter. Television without story is just advertising (which in this case is just sandwiches).

Final Grade: your choice of a Subway Black Card (free five dollar footlongs for life) or the promise of buried treasure