“Analysis of Cork-Based Networking” opens around the Study Table Mk II with Annie introducing the newest member of the Save Greendale Committee: Ben Chang. It’s an expected move since Chang has always been a gigantic part of the show. Ken Jeong’s been getting main credits billing every week for years, and he’s been trying to join our Greendale heroes since season two. He deserves this.

Chang is going to seemingly replace the void left by Troy, now that Donald Glover is no longer part of the show, in the same way that – at least for this season – Buzz has replaced Pierce. It was a question on everyone’s minds as we tried to replace primary characters with secondary players on a one-for-one basis, and the minds behind Community have tried to mask it with the inclusion of John Oliver’s Duncan, but in the end we can see the strings. Chang is supposed to be the new Troy

Annie attempts to get everyone on task, listing the current Greendale emergencies (“Is deforestation on the list?”) that need to be finished in order for the college to get back up to it’s extremely low standard of operation. The census is out of date, and that job is bestowed on Abed and Britta in order to get them to work out a feud. Abed has spoiled some major season one plot points to a Game of Thrones surrogate TV show (“They really get the incest right.”) called Bloodlines of Conquest, and Britta is three seasons behind (“I don’t start watching shows until their so popular that watching them is no longer a statement.”).

Everybody jumps on to decorating for the upcoming midterm dance (the season is about half over after all) because they think Annie will do all the work, but when Buzz expresses doubt that his assignment to rehang the bulletin board in the cafeteria can be completed or should even be attempted, she decides to show the old jaded professor of pessimism and criminology how to get things done in Greendale.

It’s a clean cut A-B-C plotted episode that promises to showcase the new cast’s dynamic. This is exactly what we needed after two episodes of farewells and a David Fincher parody. A lot has changed this season, and after last week’s departure of a beloved and integral character, it’s important to establish what this show is when it is just being itself. By partnering everybody off to explore these new dynamics we get to see what Chang and Duncan can bring to the weekly adventures, how Buzz is going to differentiate himself from Pierce and most importantly: how Abed is going to fit in now that his best friend is sailing around the world with LeVar Burton.

After the opening title sequence we settle into the new show. Abed is wearing construction worker-style headphones in order to prevent Britta from revenge-reading him excerpts of the Bloodlines of Conquest novels and, in his attempts to remain spoiler-free and update the census, accidentally meets a deaf woman. Britta, echoing the thoughts of the audience, rolls her eyes saying she hopes this isn’t a one episode thing where he gets attached to someone we never see again. But just because it’s being pointed out, doesn’t mean it’s okay, and for the rest of the episode, Abed’s cute attempts at learning sign language to communicate to a girl that can read lips slowly gives way to a sinking feeling that his character simply doesn’t work without Troy there to connect the dots between him and the rest of his pals.

Buzz and Annie, on the other hand, feed off of each other. She joins him, abandoning the decorating team, after he comes to her in defeat, having been told to find the head janitor for a work order. Their first attempt to solve the bulletin board conundrum brings them to a dead end. The poker playing janitors in the utility room put in a work order, right below “Lower flag for Reagan’s death.” Our heroes need a custodian to increase the priority.

Buzz wants to give up right then and there, he’s come from an entire life of dead ends covered in red tape and finally landed in a teaching job at Greendale. He’s seen this too many times. Annie pushes forward, though, and Hickey attempts to humour her in order to show her first hand the malevolent system that got him to where he is now.

By act two, Annie and Buzz find themselves at a custodial staff mixer and after getting stonewalled by an excellent guest-starring Kumail Nanjiani decked out in a blue speed suit, Hickey gives Edison and example of how Greendale really works. With a mention of a non-regulation toilet modification (it flushes like a DC-10 turbine) that could spell trouble for the custodians, Buzz extorts his way to the boss of the maintenance crew, Bob Waite, played by a sparingly used, always funny Nathan Fillion (who impressively pulled it off without making even one Firefly reference).

Meanwhile, the big group is trying to find a theme for the dance. The only one with an idea is Chang.

“Bear down for Midterms.”

All he can do is repeat this, over and over, in order to get everyone to realize it’s a play on words. In frustration, Duncan, Jeff and Shirley ridicule Ben to tears and after some great “Chang is totally a well-rounded character now that Troy’s gone” crying and an implication that the other Committee members are racist, the midterm dance is unanimously voted to be bear-themed.

We head back to the cafeteria which is now covered in cardboard cutout bears and a banner with Chang’s slogan. Neil comes in, really upset at how insensitive they are, making a bear-themed dance on the very same day that a bunch of children were mauled by a grizzly at a birthday party.

That’s where Chang got the idea. It’s the biggest laugh of the episode and it comes with the relief that Ben isn’t going to be anybody but Chang, even if he is filling in a gap left by Troy. We’ll probably just be seeing more of him, which is a promise of laughter.

The two bulletin board investigators end up drinking margaritas with Dean Pelton who is willing to give the final piece of the puzzle on the condition that Buzz parrots his assurance “Easy peasy lemon squeezy.”

He can’t do it, and the mission is abandoned, not so much because Buzz can’t handle the absurdity, but because he’s gotten so used to the futility of his own labyrinthine life. He pushes the blame on Annie, telling her she’s making the school dirtier by playing into the greed of the system, and exits. Cue stubborn old act break.

Back from commercials Annie checks in with the dance team who have changed the slogan to “Fat Dog for Midterms” (“You can look it up on Wikipedia.”), and made all the bears to look like fat dogs.

Fade to the dance.

Abed, at the end of a really great day with his differently-abled love interest, talking Star Wars, dodging spoilers, and learning American sign language, has the Community equivalent of the Red Wedding from Game of Thrones plot spoiled for him by the one-time guest star that’s been babysitting him all episode. Britta paid her to do it and Abed is hurt. He heads out, to lick his wounds alone and as he passes the coat check he’s reunited with the past one-off love interest (played by Brie Larson) referenced at the top of the show (from the gas leak year when Abed had to balance two dates).

Cue a montage: Buzz sitting in front of his own cork board, covered in past failures, stalls and brick walls; Nathan Fillion frustratedly being blocked by Greendale’s parental controls; Abed watching TV with an old fling.

Hickey, having contemplated it enough, clears his past off of his own board, heads into the dance and power drills the illegal tabula rasa to the wall. It’s time for a new start. 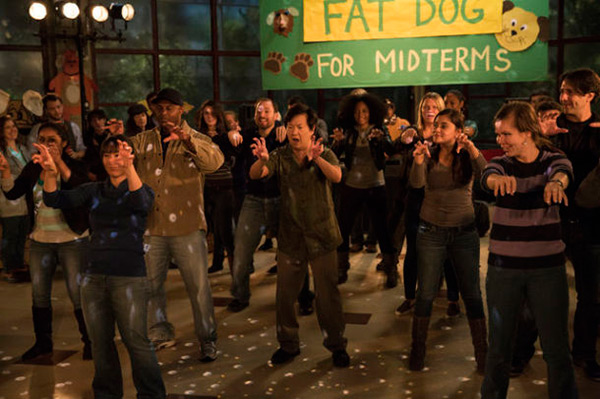 After Annie saves Buzz from some custodial thugs sicked on the old rule breaker by the Dean, Chang leads everyone in a dance he didn’t just make up called the “Fat Dog,” and just as things are wrapping up, Garrett knocks the dog-parts off of a cardboard bear. Turns out: “It’s a bear dance!”

“Analysis of Cork-Based Networking” had a lot to accomplish in this most simple of the Community episode formats. It had to prove that it could still function as a sitcom while maintaining the classic Community flavour, even after losing two major characters, one of whom still seems completely necessary for the show’s most difficult character to function.

After this episode there was no doubt in my mind that Buzz Hickey is an excellent addition to the cast. Pairing him with Annie (the character that brought out the most likable characteristics in Pierce) helped illustrate why his brand of pessimistic exasperation is a new and welcome ingredient in the show beyond what it offers in terms of laughs and one-liners.

Chang and Duncan are regular and well liked fixtures on this show. I’m confident that they will fit in perfectly in a season that requires more faculty members to make the premise work, but also to keep the environment as fresh as it’s been this season.

Abed, on the other hand, I worry about. The last we see of him, watching TV with his old single episode soul mate could imply that we have a long term love story on our hands (this, I think, is the case here), but his exclusion from the episode’s Fat Dog for Midterm dance was unsettling. I had hoped, entering this episode, that Abed would be a solid pillar of fat talking meta jokes even without Troy, but he was left outside, not really holding up anything significant, just cuteness and a Star Wars joke.

The strength of Community is in its ensemble. It’s right there in the name. When it clicks, its heartwarming, revelatory, and hilarious, but when a character isn’t given a chance to find a position in the group proper it can feel empty and frivolous. Here’s hoping Abed finds a place on the bulletin board closer to the Save Greendale Committee photo.

Final Grade: B (the magic kind with with puppets and macho rock stars)