“VCR Maintenance and Educational Publishing” is Community at its most self-aware, chock full of the in jokes and meta humour that makes it such a joy for loyal and attentive fans.

This can be a major turn off for new viewers trying to get into the show, since there is a lot of required reading that goes into appreciating the jokes in this episode. Thankfully, this half-hour is so meta that it anticipates this potential deadly spike pit of meta-reference, commenting on how alienating trying to win someone over can be while expertly tightrope walking right across the deepest and spikiest part.

All of this is to say, for a pretty straight forward 22 minutes that takes place in only three or four settings, episode nine of Community season five is complex and fun, but might leave some people (namely those who aren’t familiar with Breaking Bad) behind as it eagerly eats its own referential tail.

We start off at the Table Mk II as Abed enters with a sweet surprise, just after the Save Greendale Committee motions to replace the urinals in the women’s restroom with planters. Rachel, his soul mate from the coat check (an always welcome Brie Larson) is actually back, making the transformation from once-per-season neurotic heartthrob to recurring guest star. The two aliens of Greendale have been accelerating their relationship and have landed on their fast forward anniversary, for which Rachel has gifted Abed with a VHS board game from 1993 called Pile of Bullets.

Just as anyone who has played one of these games starts buckling down for a nostalgia ride, another sight for sore eyes walks into the room where everyone used to study, but now they mostly reconcile in. It’s Dean, dressed up as a PayDay bar, ready to break the news that cheques for staff will be deffered via apologetic rap.

It is a glorious performance from Jim Rash, who hasn’t been given much Dean time this season. His rappology only gets him so far before he starts going off the rails and saying violent, racial things about Wall Street bankers and Obama before tearfully bailing.

“I don’t know what that was,” cries the self-traumatized Pelton.

After the credits roll, we end up at Annie and Abed’s apartment. That’s right: no Troy anymore. It was a hole left by the Childish Tycoon’s departure that hasn’t been addressed until right now, and though the show didn’t have to give us resolution, I’m glad it did.

The episode is divided into two halves, and this one – which follows Annie and Abed literally trying to replace Troy – perfectly satisfies any residual “What will Abed do without his best friend” blues.

Annie’s brother Anthony (Spencer Crittenden) is staying with the roommates and she thinks he would make a great person to take the extra rent that Troy’s absence has dumped on them like a pile of bricks. This plan is a no-go with the characteristically stubborn Abed. He wants Rachel to move in.

The other half of the episode focuses on Shirley, Jeff and Hickey as they clean a Greendale storage room. Jeff finds a vent that’s not blowing any air because something’s been blocking it from the inside, and because, as (Shirley puts it) nothing good has ever come out of a vent, what he uncovers threatens to tear the friends apart.

A stack of mint condition Introduction to Chemistry Third Edition textbooks are stacked floor to ceiling, and after Jeff and Buzz morally slide their way into convincing Shirley that no good can be done by taking the contraband to the Dean (who would just use the money to buy a new rapping peanut costume), the three committee members find themselves in Jonathan Banks’ home court. What follows is a Breaking Bad-esque power parable complete with the meth trays from the AMC drama’s superlab.

This would not be so poignant in a meta sense if it weren’t for the third guest star of the episode living in the VCR at Abed and Annie’s. The two take a sidebar from the passive aggressive dinner that they’re treating their guests to and hash out a good old fashioned sitcom bet. Since flipping a coin creates alternate universes, and rock-paper-scissors is just a nine sided coin, Abed proposes that they settle the Troy-Void with a game of Pile of Bullets. 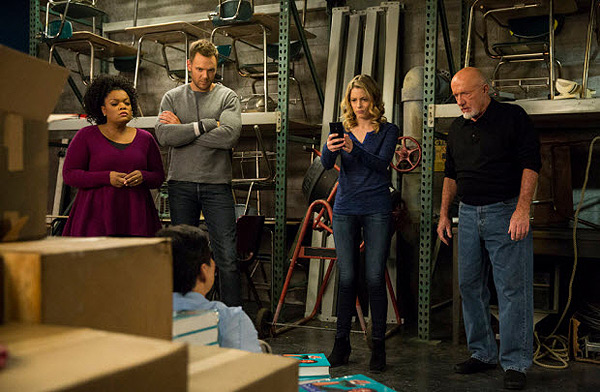 Vince Gilligan, the creator and showrunner of Breaking Bad, plays Devon, the actor who gave up a job with 1990s Apple Inc. in order to star in the VHS board game that consumes the rest of “VCR Maintenance.”

The conflict between Abed and Annie is another refreshing reminder that Community’s aspergic hero is a compelling character without Troy. In fact, compared to the conflicts that have been consuming his friends in the Post-Troy episodes, Abed has been a near constant source of propulsive conflict, simply on the merit that his social translator of a manchild is somewhere far away with LeVar Burton.

In the storage room, Britta is being mined as a potential distributor for the black market textbooks (which are coloured Heisenberg blue, by the way). She wants a 50 per cent share of the profit, but that isn’t sitting well with the Walter White of this closet-sized superlab. Shirley is arguing her down to 25, when Chang interrupts, singing into a bong.

Chang would be cool with it – he’s the sketchiest of the sketchy – but Shirley can’t take the risk of letting him just walk away. Channeling the Breaking Bad enforcer Mike Ehrmantraut, Jonathan Banks chimes in: “I’ve got rope.”

Meanwhile, the man responsible for the material being parodied back at the school is dressed as a cowboy on a cardboard set, explaining way too quickly the byzantine rules of the game he’s trapped in.

Annie and Abed are too invested to care if this game is fun for anyone else. They have manufactured personal stakes in the usual fashion that normally leads to a paintball episode. Unfortunately for the potential roommates being fought over, their hosts are in their own world when they clearly project frustrated disinterest.

Rachel wonders aloud if they’re actually watching an art film instead of playing a game and Anthony just doesn’t get the rules. This last part is a joke that will solicit a few ironic giggles from listeners of Dan Harmon’s weekly podcast. Spencer Crittenden is Harmon’s personal assistant and Dungeon Master. He’s a guy who gets the rules to games like Pile of Bullets. It is literally in his real life job description.

While the video cowboy version of Vince Gilligan confounds his fellow guest stars, the rest of the regular players are making a video of their own: Forcing Chang to confess into a cellphone that he has a stolen-textbook-kissing perversion that compelled him to horde the illegal tomes.

The bad gets too tough for Jeff to break, but before the proverbial Jesse Pinkman can escape this dark spiral of a textbook racket, Hickey ropes him too.

By now, Abed and Annie are fully immersed, and if it weren’t for the confused and bored guests providing an outside perspective to their competitive madness, we would be two thirds done another “Geothermal Escapism.”

The camera stays objective, however, and Vince Gilligan changes his hat (and accent) from that of the adventurous cowboy, to the conductor’s cap of impending civilization. It’s the end of the game, and Abed and Annie jump to play it again immediately, explaining that whoever wins gets to have their choice of roommate.

The creepiness is not lost on Rachel or Anthony.

Since Anthony is staying the night and has nowhere to run to, he concludes with classic Spencer-from-Harmontown deadpan: “I don’t really know how girlfriends work, but I don’t think you have one anymore.”

We enter the third act with Jeff and Chang tied back to back, sowing dissent amongst the ranks of their captors. It starts to work too, with Shirley arguing with the other two over who to trust with the anonymous buyer that Britta has set up to purchase the volumes.

The conundrum is solved with a smash cut and a liberal amount of Buzz’s rope. Shirley proves for the second episode in a row that she is the one who knocks, as the camera reveals Britta and Hickey bound in the same fashion as Chang and Jeff

The next day, Anthony is packing his bags. To him it was clear that there are some unresolved issues on Annie’s end. Not issues related to her drug addiction, like she guesses, but issues with the black guy in all the pictures on her and Abed’s wall (Troy).

Abed adds some cuteness to this moment of realizing what the episode’s been saying all along. Hiring a student to pour water on him like it’s raining, he third-act-apologizes to Rachel for moving too fast through their relationship. He’s not comfortable and doesn’t want to make mistakes. He lays out all of his fearful baggage, and just because it’s adorable doesn’t mean it’s not important.

Abed and Rachel’s relationship is fixed with the addition of a cardboard rainbow, and after a masterful pratfall from a passing stunt-extra, we cut to Shirley making her own rainbow connection, albeit a shadier, less successful one.

Guest star number four, Paul Williams, will only offer her twenty dollars for all of the books. They’re nearly worthless misprints.

As is custom, the status quo is reset once again at the Table Mk II, where characters offhandedly comment on what they’ve learned and the camera pans to Dean in a cubicle trying to write new, hopefully less trauma inducing rap lyrics.

In addition to providing a welcome dose of ultrameta comedy, this episode made me realize that I’ve been just like Annie and Abed, jumping on every new guest star and calling them the new Troy. Maybe I was moving too fast because I was scared and didn’t trust the show to recognize my viewing needs.

“VCR Maintenance and Educational Publishing” was Community admitting the same sentiments. The third act apology between Rachel and Abed might as well have been between Harmon and everyone who loves his creation too much to let the showrunner misuse VCR technology to rope them into living with things they aren’t ready for.

Community is rewarding to watch because it is as aware of itself as we are of it, so as long as we can trust that it’s not keeping secrets from us or manipulating us, we’ll probably be okay.

Final Grade: A sticker that says something like “Super! with a note that reads, “You’re not screwing things up.”