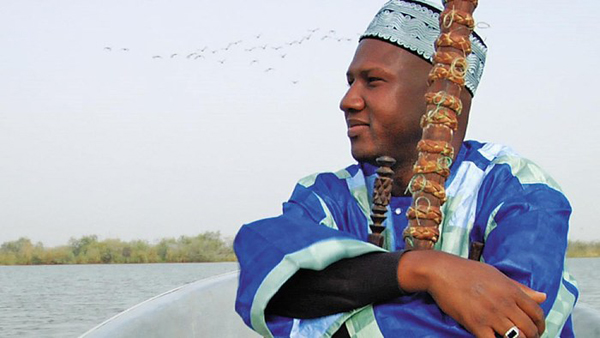 We don’t often get the chance to share some great music with our readers, but today marks a very special occasion! Enter for a chance to win a prize pack with two tickets and two CDs to see world music artists Volker Goetze and Ablaye Cissoko at The Royal in Toronto on Thursday, October 24th at 7:30pm, in honour of the documentary about the duo, GRIOT, opening at the theatre on Friday, October 25th!

Having wowed European audiences all summer with a series of sold out dates, German born trumpet player Volker Goetze and Sengalese musical sensation Ablaye Cissoko bring their much heralded tour to Canada for a 7 city, 8 show run in support of the simultaneous theatrical release of Goetze’s documentary feature GRIOT, featuring Cissoko.

With 2 of the most critically acclaimed World music albums of the past 5 years (2008’s SIRA and 2012’s AMANKA DIONTI), Goetze & Cissoko have amassed a great following for their music and for the film, which The Globe and Mail called “Stunning”.

The concert tour kicks off in Toronto on Thursday, October 24th at Toronto venue The Royal (608 College St) with the film opening in theatres beginning October 25th. The duo will also host Q & A’s at select Canadian screenings, in addition to live performances. (A full list of concerts and film opening dates can be found below.)

The concert and film tour will also see the official Soundtrack launch from Motema Music. The CD will be made exclusively available at all screening appearances and concerts.

ALSO: As a special discount to Dork Shelf readers, mention Dork Shelf at the box office for Thursday night’s concert and receive $10 off tickets! (Regular priced tickets are $35 and subject to availability.)

You can also catch Volker and Ablaye on their tour across Canada in the following cities and dates! (Contest for Toronto only):

For a chance to win a chance to see this once in a lifetime show and some awesome music, simply email contest@dorkshelf.com with GRIOT in the subject line. Please only one entry per household. Multiple entries will be deleted. For an additional chance to win, simply like the contest announcement on our Facebook page and/or re-Tweet the announcement from our Facebook! Deadline for entries is 5pm on Wednesday, October 23rd.

Good luck and remember to stay tuned to Dork Shelf for more of the latest news, interviews, features, reviews, and more great contests to come!