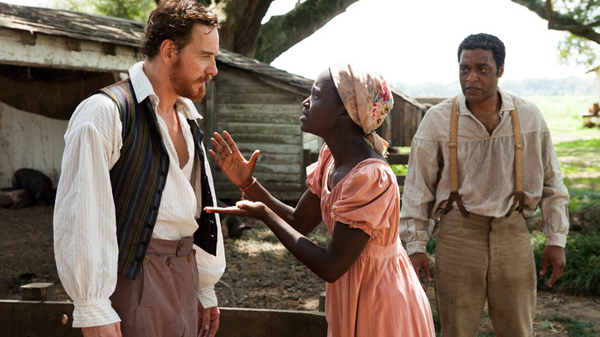 Dork Shelf is proud to team up with Fox Searchlight to give away five pairs of passes to the film our Film and Performing Arts Editor Andrew Parker calls “the best film of the year… a landmark achievement.” Enter for a chance to win a pair of passes to an advance screening of Steve McQueen’s 12 YEARS A SLAVE in TORONTO on Wednesday, October 16th.

12 YEARS A SLAVE is based on an incredible true story of one man’s fight for survival and freedom.  In the pre-Civil War United States, Solomon Northup (Chiwetel Ejiofor), a free black man from upstate New York, is abducted and sold into slavery.  Facing cruelty (personified by a malevolent slave owner, portrayed by Michael Fassbender), as well as unexpected kindnesses, Solomon struggles not only to stay alive, but to retain his dignity.  In the twelfth year of his unforgettable odyssey, Solomon’s chance meeting with a Canadian abolitionist (Brad Pitt) will forever alter his life.

12 Years a Slave – winner of the TIFF 2013 Blackberry People’s Choice Award – opens exclusively in Toronto on Friday, October 18th, but here’s how you can see it first. Simply email [email protected] with 12 YEARS A SLAVE in the subject line. Please only one entry per household. Multiple entries will be deleted. For additional chances to win, simply like the contest announcement on our Facebook page and/or re-Tweet the announcement from our Twitter. Deadline for entries is 11:59pm on Sunday, October 13th.

Good luck, and remember to stay tuned to Dork Shelf for all the latest news, reviews, interviews, features, and more great contests to come! While you’re here, check out this featurette about the real life tale of the film’s inspiration, Solomon Northup.