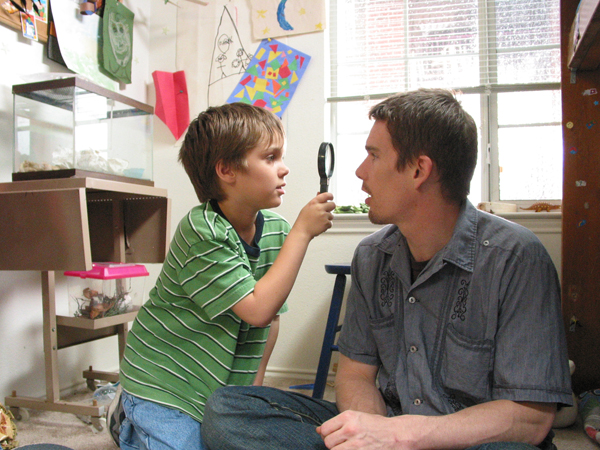 Hello EDMONTON, WINNIPEG, CALGARY, AND VICTORIA! Want a chance to see one of the most anticipated films of the year? Enter for a chance to win a pair of passes to an advance screening of Richard Linklater’s BOYHOOD, courtesy of Dork Shelf and Mongrel Media:

Filmed over 12 years with the same cast, Richard Linklater’s BOYHOOD is a groundbreaking story of growing up as seen through the eyes of a child named Mason (a breakthrough performance by Ellar Coltrane), who literally grows up on screen before our eyes. Starring Ethan Hawke and Patricia Arquette as Mason`s parents and newcomer Lorelei Linklater as his sister Samantha, BOYHOOD charts the rocky terrain of childhood like no other film has before. Snapshots of adolescence from road trips and family dinners to birthdays and graduations and all the moments in between become transcendent, set to a soundtrack spanning the years, BOYHOOD is both a nostalgic time capsule of the recent past and an ode to growing up and parenting. It’s impossible to watch Mason and his family without thinking about our own journey.

Boyhood opens on Friday, August 15th, but for your chance to see it first simply email contest@dorkshelf.com with BOYHOOD and YOUR CITY in the subject line. Please only one email entry per household. Multiple email entries will be deleted. For additional chance to win, simply like the contest announcement on our Facebook page and/or re-Tweet the announcement from out Twitter!

Good luck and remember to stay tuned to Dork Shelf for all the latest movie news, reviews, interviews, features, and more great contests to come all summer long!