Hello once again to all of our fans and readers in TORONTO and MONTREAL! It’s time to get crazy with another awesome contest! Enter for a chance to win one of 20 pairs of passes to see an advance screening of JACKASS PRESENTS: BAD GRANDPA on Wednesday, October 23rd (7:00pm in Toronto, 7:30pm in Montreal), courtesy of Dork Shelf and Paramount Pictures!

86 year-old Irving Zisman is on a journey across America with the most unlikely companions, his 8 year-old Grandson Billy in Jackass Presents: Bad Grandpa. This October, the signature Jackass character Irving Zisman (Johnny Knoxville) and Billy (Jackson Nicoll) will take movie audiences along for the most insane hidden camera road trip ever captured on camera.Along the way Irving will introduce the young and impressionable Billy to people, places and situations that give new meaning to the term childrearing. The duo will encounter male strippers, disgruntled child beauty pageant contestants (and their equally disgruntled mothers), funeral home mourners, biker bar patrons and a whole lot of unsuspecting citizens. Real people in unreal situations, making for one really messed up comedy. 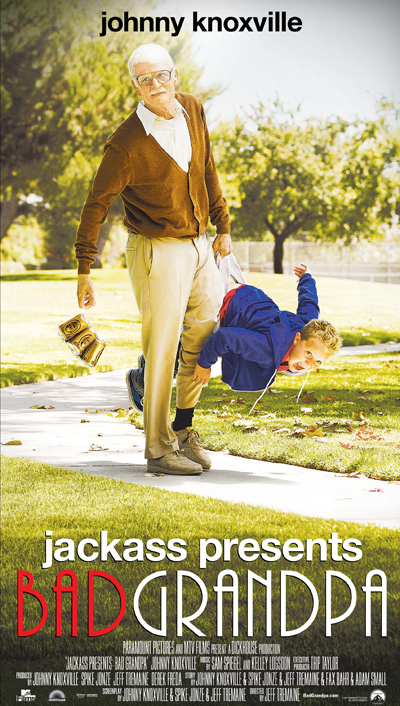 Jackass Presents: Bad Grandpa opens in theatres everywhere on Friday, October 25th, but here’s how you can win a chance to see it first! Simply email contest@dorkshelf.com with JACKASS PRESENTS: BAD GRANDPA and YOUR CITY in the subject line. Please only one entry per household. Multiple entries will be deleted. For additional chances to win, simply like the contest announcement on our Facebook page and/or re-Tweet the announcement from our Twitter! Deadline for entries is 11:59pm on Saturday, October 21st.

Good luck and remember to stay tuned to Dork Shelf for all the latest news, reviews, interviews, features, and more great contests to come!