CONTEST: See an Advance Screening of TRANSFORMERS: AGE OF EXTINCTION - That Shelf Skip to main content

Attention TORONTO and MONTREAL, the time has come to give away some passes to one of the most anticipated films of the summer movie season. Enter for a chance to win a pair of passes to see an advance screening of TRANSFORMERS: AGE OF EXTINCTION on Wednesday, June 25th at 7:00pm, courtesy of Dork Shelf and Paramount Pictures.

TRANSFORMERS: AGE OF EXTINCTION begins after an epic battle left a great city torn, but with the world saved.  As humanity picks up the pieces, a shadowy group reveals itself in an attempt to control the direction of history…while an ancient, powerful new menace sets Earth in its crosshairs. With help from a new cast of humans, Optimus Prime and the Autobots rise to meet their most fearsome challenge yet.  In an incredible adventure, they are swept up in a war of good and evil, ultimately leading to a climactic battle across the world. 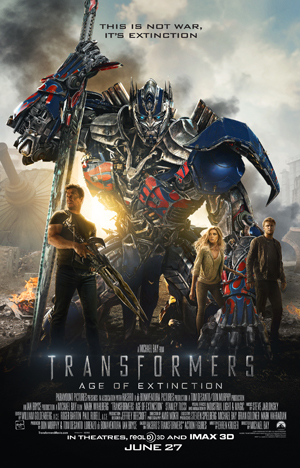 TRANSFORMERS: AGE OF EXTINCTION hits theatres on Friday, June 27th, but here’s how you can see it first! Simply email contest@dorkshelf.com with TRANSFORMERS: AGE OF EXTINCTION and YOUR CITY in the subject line. Please only one email entry per household. Multiple emails will be deleted. For additional chances to win, simply like the contest announcement on our Facebook page and/or re-Tweet the announcement from our Twitter! Deadline for entries is 11:59pm on Thursday, June 19th. Winners will be selected at random and notified via email.