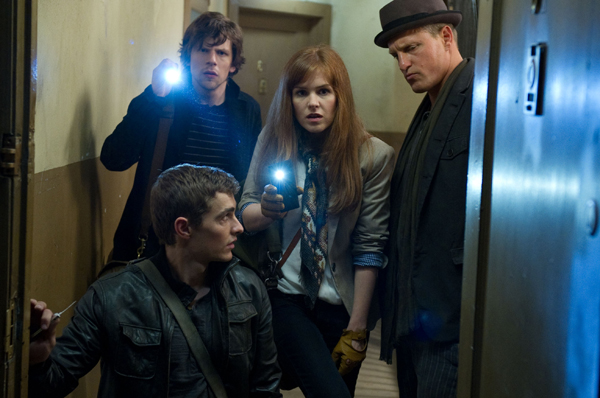 Last week we had a very special contest and we asked you to pay close attention to Dork Shelf over the next few weeks, and here’s why:

Dork Shelf and eOne Films have teamed up to give away even more great prizes and special screening passes to catch NOW YOU SEE ME in TORONTO, HALIFAX, OTTAWA, WINNIPEG, CALGARY, EDMONTON, and VANCOUVER!

For TORONTO, we have ten pairs of passes to a special RED CARPET advance screening of the film on Wednesday, May 29th at 7:00pm where a member of the film’s cast will be in attendance!

For all other cities we have five pairs of passes for a special screening at 7:00pm on Thursday, May 30th. (7:30 in Calgary ONLY).

Like we said, you should pay attention closely, because after you learn more about the film, we’re going to make some extra prizes appear before your very eyes…

NOW YOU SEE ME pits an elite FBI squad in a game of cat and mouse against “the Four Horsemen”, a super-team of the world’s greatest illusionists.  “The Four Horsemen” pull off a series of daring heists against corrupt business leaders during their performances, showering the stolen profits on their audiences while staying one step ahead of the law. Starring Jesse Eisenberg, Mark Ruffalo, Woody Harrelson, Dave Franco, Isla Fisher, Morgan Freeman, and Michael Caine. Directed by Louis Leterrier (The Incredible Hulk, The Transporter).

NOW YOU SEE ME opens in theatres everywhere on  Friday, May 31st, but here’s how you can try to make a pair of tickets appear out of this air for yourself. Simply email contest@dorkshelf.com with NOW YOU SEE ME and YOUR CITY in the subject line, and be sure to include your full name in the body of the email. Please only one entry per household. Multiple entries will be deleted. For additional chances to win, simply like the contest announcement on our Facebook page and/or re-Tweet the announcement from our Twitter! Deadline for entries is 11:59pm on Sunday, May 26th.

Wait, there’s more! EVERY winner of passes will also receive a Now You See Me T-Shirt and coffee mug, courtesy of eOne Films!

Now we can wish you good luck! And thanks for making Dork Shelf your favourite destination for all the latest news, reviews, interviews, and features. And be sure to stay tuned because we still have a few more tricks up our sleeves…

Actually, before you go, we have one more surprise in store! Here’s a look at the first four minutes of the film! Enjoy!