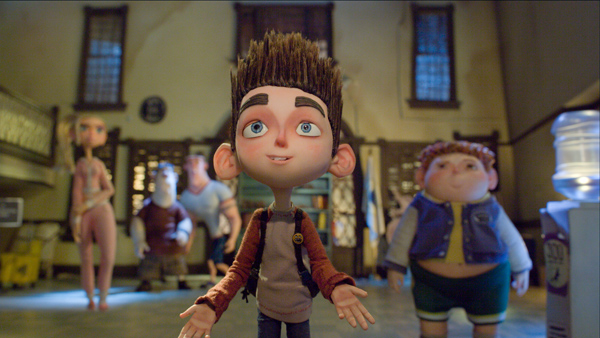 Hi Dork Shelfers not from the great city of Toronto ARE YOU READY TO GET SCARED OUT OF YOUR MINDS AND LAUGH YOUR BUTTS OFF?

Sorry for the shouting, but now you lucky people in Halifax, Winnipeg and Ottawa will get a chance to experience the awesomeness of ParaNorman, as Dork Shelf and Alliance Films want to send ten lucky winners and a guest of their choice to see this awesome animated horror comedy from the studio that brought you Coraline. The screenings will be on Wednesday, August 15th at 7:00pm.

The new 3D stop-motion comedy thriller from animation company Laika, reteaming with Focus Features after the groundbreaking Academy Award-nominated Coraline, ParaNorman is the company’s second stop-motion animated feature to be made in 3D. In ParaNorman, a small town comes under siege by zombies. Who can it call? Only misunderstood local boy Norman (voiced by Kodi Smit-McPhee), who is able to speak with the dead. In addition to the zombies, he’ll have to take on ghosts, witches and, worst, of all, grown-ups, to save his town from a centuries-old curse, but this young ghoul whisperer may find his paranormal activities pushed to their otherworldly limits. The film also features the voices of Anna Kendrick, Casey Affleck, Christopher Mintz-Plasse, Leslie Mann, and John Goodman.

ParaNorman opens in theatres across Canada on Friday, August 18th, but we want to send you guys there first! To enter, simply email [email protected] with ParaNorman and YOUR CITY in the subject line. Please only one entry per household. For additional chances to enter, like the contest announcement on our Facebook page, or re-tweet the announcement from our Twitter! Deadline for entries is 11:59pm on Monday, August 13th.

So tonight, you might want to go to sleep with the lights on and maybe hold your teddy bear extra tight, but don’t forget that your friends at Dork Shelf will never hurt you. Stay tuned to us for all the latest news, reviews, and more great giveaways and contests in the weeks to come.