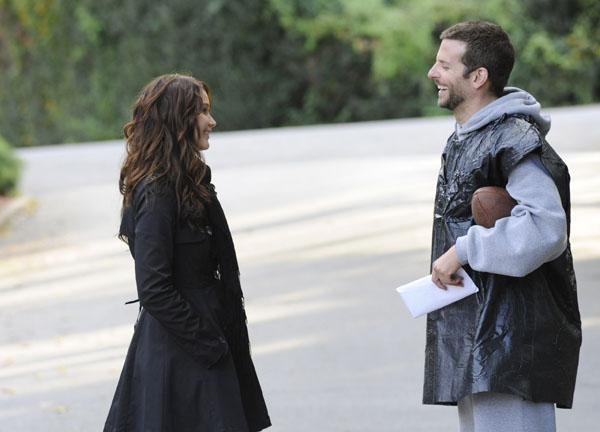 It’s a dreary day here in Toronto, and since we don’t have anything to give to our hometown crowd (today, anyway), we wanted to cheer ourselves up by giving away some tickets to an advance screening of the TIFF 2012 Audience Award Winning The Silver Linings Playbok in Ottawa, Winnipeg, and Halifax courtesy of Alliance Films.

The screening in Ottawa is on Monday, November 12th at 7:00pm, so act fast!

The screenings in Winnipeg and Halifax are on Monday, November 19th at 7:00pm

Life doesn’t always go according to plan…Pat Solatano (Bradley Cooper) has lost everything — his house, his job, and his wife. He now finds himself living back with his mother (Jacki Weaver) and father (Robert DeNiro) after spending eight months in a state institution on a plea bargain. Pat is determined to rebuild his life, remain positive and reunite with his wife, despite the challenging circumstances of their separation. All Pat’s parents want is for him to get back on his feet – and to share their family’s obsession with the Philadelphia Eagles football team. When Pat meets Tiffany (Jennifer Lawrence), a mysterious girl with problems of her own, things get complicated. Tiffany offers to help Pat reconnect with his wife, but only if he’ll do something very important for her in return. As their deal plays out, an unexpected bond begins to form between them, and silver linings appear in both of their lives.

The Silver Linings Playbook opens in theatres everywhere on Friday, November 21st, but we want to send you to see it first. To enter for a chance to win, simply email [email protected] with SILVER LININGS and YOUR CITY in the subject line. Please only one entry per household. For additional chances to win, simply like the contest announcement on our Facebook page and/or retweet the announcement from our Twitter.

Good luck to all, and as always stay tuned to Dork Shelf for all the latest news, reviews, interviews, and more great contests!