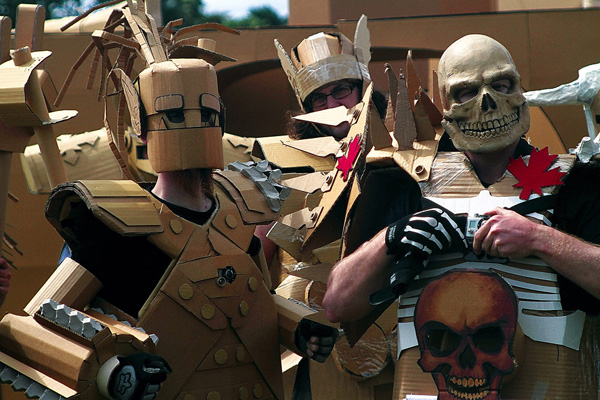 Next week in Toronto the 7th annual Canadian Film Fest kicks off, and Dork Shelf wants to send two lucky winners a pair of passes to see the debut of one of the festival’s most anticipated entries, the comedic documentary SKULL WORLD on Friday, March 22nd at 9:15pm at The Royal.

Greg Sommer is an enigma, wrapped inside a mystery, encased in a Jean-Jacket Vest. An enterprising man in his early 30s, Greg, and his alter-ego SKULL MAN, are at war. Box Wars that is. Welcome to Greg’s world. A world of warriors, magic, and glory. A world of metal. Greg is building the Canadian-chapter of BOX WARS, an international underground movement of Cardboard-based combat. SKULL WORLD follows two years in the life of Greg, and sheds light on exactly what makes him, and his goals in life, so unique. A comedic and moving journey awaits, not for the faint of heart.

For your chance to win a pair of tickets, simply email contest@dorkshelf.com with SKULL WORLD in the subject line. Please only one entry per household. Multiple entries will be deleted. For additional chances to win, simply like the contest announcement on our Facebook page and/or re-Tweet the announcement from our Twitter. Deadline for entries is 11:59pm on Wednesday, March 20th.

Good luck and remember to stay tuned to Dork Shelf for all the latest news, reviews, interviews, and contests!