Are you a true cinema buff that gets bummed out when they aren’t able to see all of the films in all of the Oscar nominated categories? Have you ever wished you could catch all of the elusive live action and animated shorts in one place? Well, if you live in Toronto, the TIFF Bell Lightbox will be screening the live action and animated short films nominated for this year’s Academy Awards starting on January 30th, and Dork Shelf and TIFF have teamed up to give some lucky winners a prize pack of passes to see both programs of shorts! 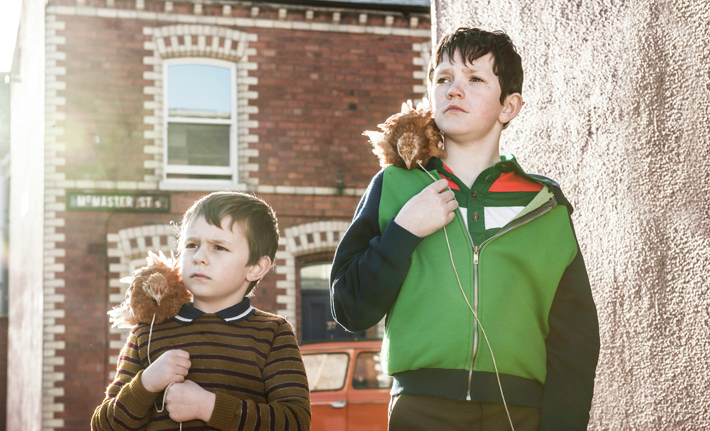 The nominees for Best Live Action Short include:

Aya (dirs. Oded Binnun & Mihal Brezis \ Israel, France 2014 \ English, Hebrew, Danish w/ English subtitles \ 39 min.)
Two strangers unexpectedly meet at an airport. He mistakenly assumes her to be his assigned driver. She, enchanted by the random encounter, does not hurry to prove him wrong.

Boogaloo and Graham (dirs. Michael Lennox & Ronan Blaney \ UK 2014 \ English \ 14 min.)
Official Selection, Toronto International Film Festival 2014
Jamesy and Malachy are over the moon when their soft-hearted dad presents them with two baby chicks to care for. Raising their tiny charges, declaring themselves vegetarian and dreaming of running a chicken farm, the two boys are in for a shock when their parents announce that big changes are coming to the family.

The nominees for Best Animated Short are:

The Dam Keeper (dirs. Robert Kondo & Dice Tsutsumi \ USA 2014 \ No dialogue \ 18 min.)
Official Selection, TIFF Kids International Film Festival 2014
Pig works tirelessly to keep the windmill dam spinning in order to protect his town from pollution — but when a new student joins his class, he is faced with a decision that could change the town forever.

Feast (dirs. Patrick Osborne & Kristina Reed / USA 2014 / No dialogue / 6 min.)
Feast, a new short from first-time director Patrick Osborne (Head of Animation, Paperman) and Walt Disney Animation Studios, is the story of one man’s love life as seen through the eyes of his best friend and dog, Winston, and revealed bite by bite through the meals they share.

Me and My Moulton (dir. Torill Kove \ Canada 2014 \ English \ 14 min.)
Official Selection, Toronto International Film Festival 2014
A seven-year-old girl longs for a bicycle so that she can be more like the other kids in her Norwegian town, but her embarrassingly unconventional, modernist architect parents see things differently. Academy Award-winning animator Torill Kove weaves memory and fantasy together in this droll and charming look at the pain of childhood alienation.

A Single Life (dirs. Marieke Blaauw, Joris Oprins & Job Roggeveen \ The Netherlands 2014 \ No dialogue \ 2 min.)
Official Selection, Toronto International Film Festival 2014
Upon playing a mysterious vinyl record, Pia begins to travel through space and time, experiencing her own reality at different ages and stages in this vibrantly animated witty ditty showcasing a life in (one) song.

You can catch all of the nominees when they play exclusively at the TIFF Bell Lightbox starting on Friday, January 30th, but here’s how you can see them on us! Simply email contest@dorkshelf.com with OSCAR SHORTS in the subject line! Please include a MAILING ADDRESS in your email. Please only one email entry per household. Multiple entries will be deleted. For additional chances to win, simply like the contest announcement on our Facebook page and/or re-Tweet the announcement from out Twitter! Deadline for entries is 11:59pm on Tuesday, February 3rd.

Good luck and remember to stay tuned to Dork Shelf for all the latest movie news, reviews, interviews, features, and more great contests! And while you’re here, check out a clip from the film!