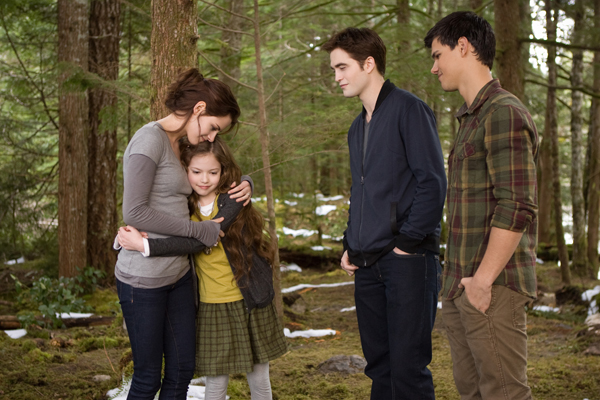 Hello once again fellow dorks and welcome to the end of an era as we are now upon the final big screen entry in The Twilight Saga based on the best selling novels from Stephenie Meyer. With the final film, THE TWILIGHT SAGA: BREAKING DAWN – PART 2 now upon us, Dork Shelf and eOne Films are giving away three special prize packs to commemorate this monumental release of the fall movie season.

Every moment has led to this.

The highly anticipated final installment of The Twilight Saga, directed by Academy Award® winner Bill Condon, THE TWILIGHT SAGA: BREAKING DAWN – PART 2 illuminates the secrets and mysteries of this spellbinding romantic epic that has entranced millions.  Bella (Kristen Stewart) awakens transformed. She is now a mother and finally a vampire.  While her husband Edward (Robert Pattinson) delights in her beauty, speed, and uncommon self-control, newborn Bella has never felt more alive; and the destiny of her best friend Jacob Black (Taylor Lautner) has become entwined in that of their exceptional daughter Renesmee (Mackenzie Foy).  The arrival of a creature so rare cements an extended family, but will soon ignite forces that threaten to destroy them all.

With more of the struggle, romance, passion, mystery, and action that made previous entries in The Twilight Saga international blockbusters, THE TWILIGHT SAGA: BREAKING DAWN – PART 2 concludes the universally adored tale of love, family, courage, empowerment, and destiny.  Based on Stephenie Meyer’s bestselling book series, the novels and films constitute a full-blown cultural phenomenon with a dedicated global fan base that has eagerly awaited each instalment.

For your chance to win this special package, simply email contest@dorkshelf.com with BREAKING DAWN in the subject line. Please only one entry per household. For additional chances to win, like the contest announcement on our Facebook and/or re-Tweet the announcement from our Twitter! Contest is open to all Canadian residents except those in Quebec. Deadline for entries is 11:59pm on Tuesday, November 13th.

Good luck and as always stay tuned to Dork Shelf for all the latest news, reviews, interviews, and more great contests in the future!