Hear ye! Hear ye! It’s time for the latest Dork Shelf contest. Enter for a chance to win a copy of HERCULES on Blu-Ray, courtesy of Dork Shelf and Paramount Pictures Home Media.

Paramount and Metro-Goldwyn-Mayer Pictures’ film HERCULES, starring Dwayne Johnson, bows on Blu-Ray and DVD on Tuesday, November 4th. Based on Radical Comics’ ‘Hercules,’ this ensemble-action film is a revisionist take on the classic myth set in a grounded world where the supernatural does not exist. HERCULES also stars Ian McShane, Rufus Sewell, Joseph Fiennes, Peter Mullan and John Hurt.

-“Hercules and his Mercenaries”—Delve into the story behind the team assembled by Hercules for his perilous missions and the skills required of them.

-“Weapons!”—Exploration of the weapons created for the spectacular action scenes, including training with the actors.

-“The Bessi Battle”—Discover how one of the major action sequences of the film was created with the filmmakers, actors, stunt team, make-up effects and more.

-“The Effects of Hercules”—A behind-the-scenes look at the film’s spectacular visual effects. 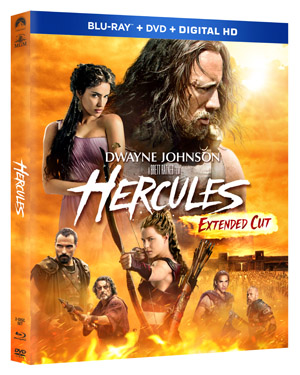 For your chance to win, simply email [email protected] with HERCULES in the subject line. Please only one email entry per household. Multiple email entries will be deleted. Contest open to Canadian residents only. For additional chances to win, simply like the contest announcement on our Facebook page and/or re-Tweet the announcement from our Twitter! Deadline for entries is 11:59pm on Monday, November 17th.

Good luck, and remember to stay tuned to Dork Shelf for all the latest movie news, reviews, interviews, features, and more great contests!