There are some things that Machete won’t do (texting, tweeting, etc.), but he will sign a poster for you!

Danny Trejo returns as ex-Federale agent Machete, who is recruited by the President of the United States for a mission which would be impossible for any mortal man. Machete must take down a madman revolutionary and an eccentric billionaire arms dealer who has hatched a plan to spread war and anarchy across the planet. 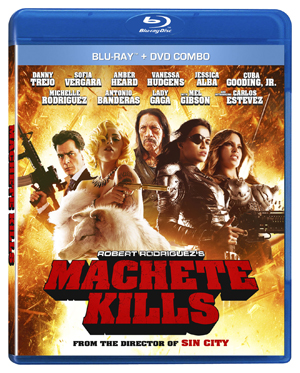 You can get your own copy of Machete Kills in stores everywhere on January 21st, but here’s how you can win one on us! Simply email contest@dorkshelf.com with MACHETE KILLS in the subject line. Contest open to Canadian residents only. Please only one entry per household. Multiple entries will be deleted. For additional chances to win, simply like the contest announcement on our Facebook page and/or re-Tweet the announcement from our Twitter! Deadline for entries is 11:59pm on Thursday, January 23rd.

Good luck and remember to stay tuned to Dork Shelf for all the latest movie news, reviews, interviews, features, and more great contests throughout the new year!