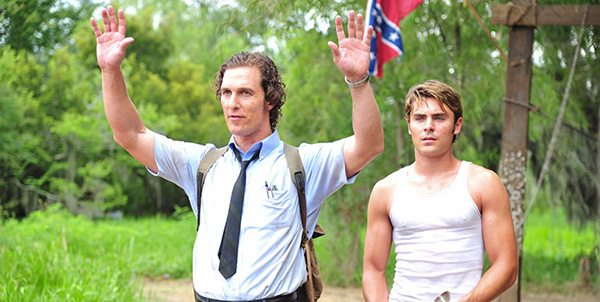 Extra! Extra! Read all about it! Dork Shelf to hold new contest! Well, it might not refer to that kind of delivery man EXACTLY, but Dork Shelf and D Films have teamed up to give away two copies of the thrilling drama THE PAPERBOY on Blu-Ray!

A sexually and racially charged film noir from Oscar®-nominated director Lee Daniels, THE PAPERBOY takes audiences deep into the backwaters of steamy 1960s South Florida, as investigative reporter Ward Jansen (Matthew McConaughey) and his partner Yardley Acheman (David Oyelowo) chase a sensational, career-making story.  With the help of Ward’s younger brother Jack (Zac Efron) and sultry death-row groupie Charlotte Bless (Nicole Kidman in her Golden Globe®-nominated performance for Best Supporting Actress), the pair tries to prove the violent swamp-dweller Hillary Van Wetter (John Cusack) was framed for the murder of a corrupt local sherrif.  Based on the provocative bestselling novel by Pete Dexter, THE PAPERBOY peels back a sleepy small town’s decades-old facade of Southern gentility to reveal a quagmire of evil as dark as a Florida bayou.

The Paperboy hits Blu-Ray, DVD, and VOD in Canada on Tuesday, July 9th, but here’s how you can win a copy for yourself! Simply email contest@dorkshelf.com with THE PAPERBOY in the subject line. Please only one entry per household. Multiple entries will be deleted. Contest open to all Canadian residents. For additional chances to win, simply like the contest announcement on our Facebook page and/or re-Tweet the announcement from our Twitter! Deadline for entries is 11:59pm on Tuesday, July 16th.

Good luck and remember to stay tune to Dork Shelf for all the latest news, reviews, interviews, features, and more great contests!