Cuphead in Don’t Deal with the Devil makes an excellent first impression. Borrowing the style of a 1930s Fleischer cartoon, every frame bursts with color and whimsy in a way that stands out amongst the drab browns of modern action titles. Cuphead is memorable and endearing, a seductive concoction guaranteed to appeal to any fans of classic animation.

That’s why it’s jarring when you first sit down to play it and discover that the gameplay is almost at odds with the animated style. Though the hand-drawn visuals grab your attention, Cuphead is notable for its relentless difficulty, which plays out in a series of boss battles that require painstaking trial and error. I first played Cuphead last year at X15, Microsoft’s annual Xbox showcase in Toronto, and while the game is a delight, it can be extremely unforgiving.

It was therefore fascinating to see how the game had evolved when I revisited Cuphead last week at X16. It’s always exciting to see new levels and new bosses, yet what’s remarkable is that Cuphead is rarely frustrating, largely because the developers made a conscious effort to make a game for hardcore fans and casual fans alike.

“Half the people think this is going to be a child friendly game,” said Chad Moldenhauer, one of the co-founders of Studio MDHR, the developer of Cuphead. “The visual style holds people who otherwise would have never touched it. If it looked like a pixel art retro game with this difficulty, I don’t think people would have stayed to play it.” 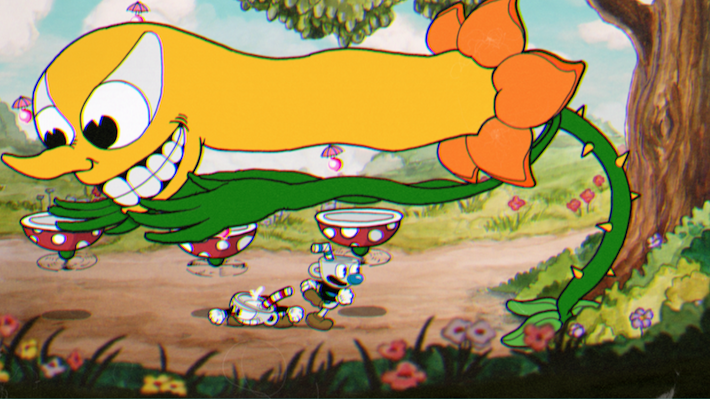 Thanks to that combination of good design and Saturday morning charm, Cuphead remains inviting despite its difficulty. Some of that has to do with the animation. At the most superficial level, the cartoon aesthetic makes for a sharp contrast to the grim darkness of a difficult yet alienating game like Dark Souls.

Studio MDHR has also introduced a slew of new features to soften the edge and make the experience more welcoming. The game now has a shop where players can purchase power-ups and weapon upgrades, as well as an easy mode for those unprepared for the full challenge.

“Easy mode strips the bosses of some of their patterns, but still gives the player a chance to practice,” said Moldenhauer. “Those, combined with the infinite lives – you don’t have to start the entire game again when you die – should make it accessible to most people who want to play a retro game.” 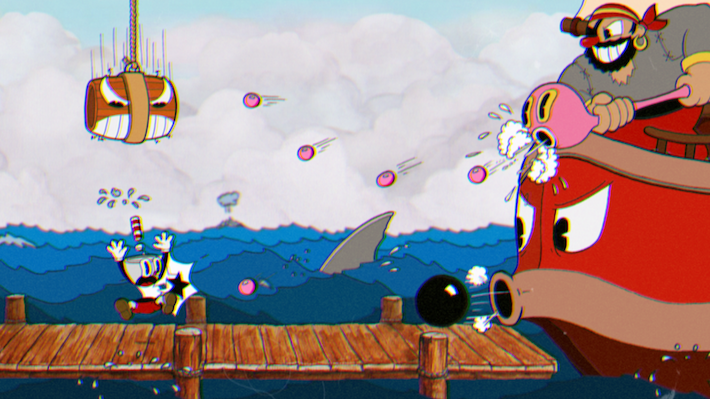 For the most part, Studio MDHR has accomplished the feat without changing the core gameplay, instead layering new features over the top to make it easier to engage with the mechanics. For instance, whenever you die, the game shows you a progress meter that tells you how close you were to the finish line. According to Moldenhauer, the meter feeds an “almost there” mentality that encourages people to keep playing. You might not have succeeded, but you know that you were close, and that gives you the incentive needed to continue.

“We always knew that we wanted something like that because we didn’t want the boss health onscreen. We played around with a few things and came up with this progress meter, and it helps,” said Moldenhauer.

The emphasis on cooperative play creates a similar effect. Cuphead can be played solo or with a friend, and the two experiences are comparable with regards to difficulty. Co-op players have a brief window to revive a fallen teammate, but they also have to deal with bosses that have nearly twice as much health. Even so, the co-op version feels like the definitive version of the game because having a friend to share the gameplay burden makes the challenge a little less daunting and a little more entertaining.

“It’s more fun. The fact that you can resurrect a dead player before their ghost leaves the screen makes it more of a ‘save me’ kind of gameplay thing,” said Moldenhauer. “At the same time, it makes the game harder, because now there’s another person on the screen getting in your way. More bullets are blocking your view of the attacks that are coming at you.”

The key is that the game offers a positive feedback loop rather than a crushing one. It doesn’t make Cuphead any easier, but it is enough to convince you that Cuphead is gentler than it actually is. That makes it more approachable, even for those that don’t seek out the most difficult video games.

“We get, ‘This game’s really hard, but I want to keep trying.’” said Moldenhauer, when asked to describe the typical reaction to the game.

“A lot of people didn’t know that the current generation of consoles could handle this much full frame animation,” he added. “We were naïve enough to think, hey, let’s try this, and we’re pushing as much animation as we can to the screen. It’s still not doing anything to the console, so we’ll keep doing that.”

“Let’s try this” is a good way to understand the ambitious appeal of Cuphead. Many video games seem to discourage players, presenting themselves as obstacles to be overcome and implying that players are inadequate if they’re unwilling to make the necessary sacrifices. Cuphead presents itself as an experience to be enjoyed, but you do have to put in some effort if you want to see everything it has to offer, and that feels appropriate for a game with so much hand-drawn animation. Cuphead is a trial of desire and persistence, and that’s why it’s shaping up to be one of the most unique games of the coming year.