America: land of the free, home of the brave. Right? More like the land of willful ignorance.

We’re talking about a “free” country that spent generations feasting off the blood, sweat, and tears of African slaves. But it wasn’t only POCs suffering through hundreds of years of oppression. America, the “land of opportunity,” even denied high-class white women the right to vote until 1920.

As for the land of the brave? The United States’ current president chickened out of military duty. That lack of patriotic conviction didn’t prevent him from becoming Commander-in-Chief, either. So that home of the brave motto isn’t always held to the highest standard either.

America is more like the land of contradiction. It’s a place where a basketball player from Wilmington, North Carolina, born in 1963, went on to become the world’s most famous athlete. But had he been born a few decades sooner, his black skin would be a barrier to playing in the NBA.

America is the land of opportunity and sadistic opportunism. A place where anyone can succeed while the vast majority struggles beneath the boot-heal of systemic oppression. And it’s these conflicting spirits of optimism and anguish that director Spike Lee channels in his latest Joint, Da 5 Bloods.

Back in Nam, the men served under a valiant squad leader known as Stormin’ Norman (Chadwick Boseman). To these men, Norman was the black Captain America. He protected them on the battlefield and inspired them to be better men off of it. Christening themselves Da 5 Bloods, the men formed life-long bonds that were forged amidst the flames of war. But their love for one another wasn’t more powerful than fate, Sadly, one member of this band of brothas never returned home.

Norman died on the battlefield, and his fellow Bloods were unable to recover his body. Now, in the present day, the men have a lead on the location of his remains, and they plan a trip to head back to the jungle to find their former leader and bring him home. But this mission isn’t entirely on the up-and-up. The Bloods buried millions of dollars worth of gold in the jungle too. While they have a great love for Norman, bringing back his body is a cover story for bringing home the loot.

Lee packs plenty of concepts and themes into Da 5 Bloods’ 154-minute runtime. While two and a half hours is a long time, this film never feels like it drags. The striking cinematography and magnetic performances kept me locked in every step of the way.

The Brooklyn-based auteur gives the audience plenty of food for thought but doesn’t always offer enough time to chew. The story covers the spoils of war, systemic oppression, mental health, toxic masculinity, opioid addiction, economic disparity, American exceptionalism, and absentee fathers. Again, that’s a whole lot to chew on, and I’m leaving things out. But that’s vintage Spike Lee, a filmmaker who makes every frame in his movies count. Lee leaves a lot of questions up in the air for viewers to ponder; he refuses to hold his audience’s hand or provide easy answers.

Lee’s most potent work asks viewers to consider two conflicting ideas at once. After all, the world isn’t black and white, and this filmmaker, known for being black AF, loves exploring shades of gray. This concept is embodied by Delroy Lindo’s character Paul.

Paul is one of the most complicated characters to grace the screen in a very long time. First off, he’s a black Trump supporter, which comes with a specific set of assumptions. While the black MAGA supporter is a bold character trait, it’s a superficial touch that doesn’t get to the root of what makes the character so compelling.

Paul is a broken human being, still suffering from the emotional wounds he suffered decades ago during the war. Lindo runs through a gamut of emotions, often playing him as a twitchy vet with PTSD and a distant father. But there’s plenty of love and respect for his friends within him too. He comes off as cruel and selfish one moment, but we root for him the next. Lee does an excellent job making us understand the roots of Paul’s issues, and we can sympathize with him, even if we don’t like him.

Love the character or hate him, you can’t deny Lindo’s phenomenal work. Even if the film industry wasn’t decimated by COVID-19, Lindo’s turn in Da 5 Bloods would still be in the conversation for performance of the year. I’m calling it now, this man is in for serious Oscar-buzz. Expressing Paul’s multitudes with such anguished nuance and grace is no easy task, and in the wrong hands, this role could derail the film.

Da 5 Blood’s cinematographer, Newton Thomas Sigel, is the film’s unsung star. The film’s engrossing visuals made me feel like I was right in the mix alongside the Bloods, venturing deep into the steamy Vietnamese jungle. The film shot in Chiang Mai, Bangkok, and Ho Chi Minh City, and Sigel’s beautiful photography captures the Bloods’ journey in vivid detail each step of the way. 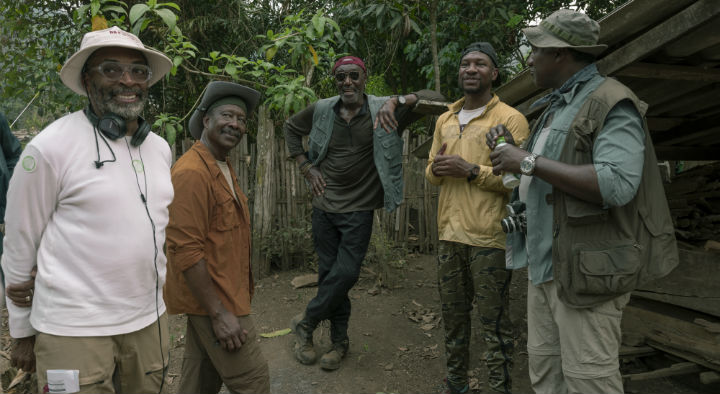 Lee and Sigel make wonderful use of cinematic language to spice up the film’s visual palette. When the story flashes back to the war, they shoot the action on 16mm film, giving it a rich and grainy vintage newsreel look. They shoot the war-era in a boxy 4:3 aspect ratio. In contrast, scenes shot in the city during the present day are captured in a 2:40 aspect ratio. But once the Bloods finally journey into the jungle, the perspective shifts to an eye-opening 1:85 aspect ratio. The moment has the same effect as Dorothy stepping outside her door after crashing down in Oz.

Jazzing it all up is Terence Blanchard’s stirring score. Blanchard’s work with Lee dates all the way back to Jungle Fever in 1992. Blanchard is one of the best in the world at what he does, and his contribution to a score is enough to carry any film. But Lee takes things to the next level and peppers the film with velvet voiced Motown legend Marvin Gaye. The movie pulls several songs from Gaye’s seminal album, What’s Going On, and the addition couldn’t feel more authentic. Adding Gaye’s voice to the Vietnam war-themed movie is like adding Jordan in his prime to the 2019 world champion Toronto Raptors. It’s an embarrassment of riches.

Lee really swings for the fences with this film – but who would expect anything less this deep into his storied career? Da 5 Bloods is a war movie, a crime caper, and a road trip film full of intense action sequences and heart-crushing drama.

Beneath the gripping layers of genre movie thrills, Lee unspools a complicated story about pain, trauma, and grief while questioning our capacity to heal. And in typical Lee fashion, it’s all examined through the lens of uncompromising blackness.

Five black men from the land of opportunity risk their lives and corrupt their souls fighting for a country that doesn’t love them back. What’s more American than that?