There’s nothing quite like the midnight launch for a new book, film or video game: fans sitting in lines for hours, chatting amongst people with mutual interests and passions, and of course the challenge to see just how long you can stay outdoors before giving in to the tedium and absurdity of it all.

On Monday, gaming fans lined up in front of electronics and gaming stores to await the midnight launch of Diablo III, Blizzard Entertainment’s latest action role-playing game in the series that kick-started the genre back in 1996. Gamers had been waiting more than 12 years since the last installment descended upon PCs and devoured the lives of millions, so what was another 12 or so hours?

People wait in line outside the Best Buy electronics store at Bay and Dundas Street in downtown Toronto at around 11:00 pm. Many near the front of the line sat patiently in their lawn chairs. The line stretched to the street corner and around the bend, slowly growing south down Bay Street.

Angelo Kiustenglou entered the line at 12 noon, fully dressed as a Necromancer from Diablo II. It’s his first-ever cosplay. Best Buy (and the Future Shop up the street) offered contests exclusive to people who made the effort to show up in costume. Plus, Angelo says, “it’s the one chance I get to stand in the middle of downtown with a suit of golden armour on.”

Angelo’s 15-year-old brother Frankie came dressed as a Barbarian, and spoke entirely “in-character” with a growl and the occasional guttural warcry. As he shouted during our short chat, passersby shouted in reply, and it became an impromptu Waaaagh!-off in the middle of the city.

When asked how the wait had been outside, shirtless no less, he described it as “painful,” although that might have had more to do with his not having the game in his hands yet more than anything.

“And I’m kind of hungry. But, you know, I’m committed here.”

This Demon Hunter was called out of line for photographs almost constantly, thanks to her fantastic costume. In case you were wondering, those are special contact lenses, not camera red-eye. 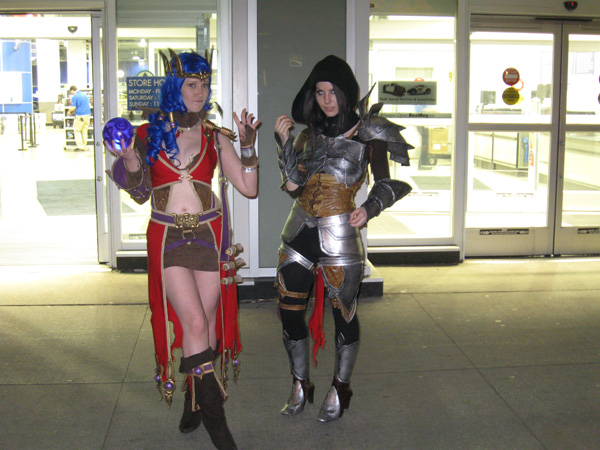 These two cosplayers were part of Best Buy’s launch party crew, which included people giving away mousepads, posters and energy drinks to those waiting in line.

First in line were Oscar “Cayo” Gonzalez, left, and Tad Yuan. If Cayo looks familiar, that’s because he was at the front of the line at the very same store at the Starcraft II midnight launch in 2010.

Why do they love the Diablo games enough to wait in line for 12 hours? “The replayability, and the random nature of the game,” explains Cayo. “And the loot, man. The loot.” 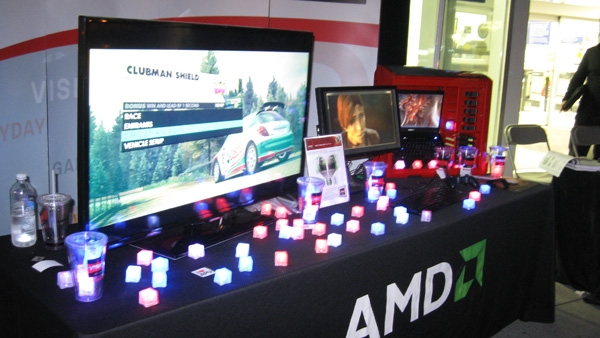 Best Buy’s entrance was adorned by a display from graphics company AMD, including Diablo III trailers, mousepads, and headsets, along with the Health and Mana-coloured light-boxes.

We’re not sure why DiRT 3 was loaded on the main computer. If they were trying to promote the upcoming DiRT Showdown, it fell on deaf ears.

Outside the Future Shop at Yonge and Dundas Streets, the lineup stretched west past the future site of the Silver Snail comic store, all the way to Gould Street and Ryerson University.

A man on a bike passes by. He asks: “Yo, what’s everyone lining up for?”

Left to right: Shanker, Tyler, Eric, George and their friend Michael (not pictured, holding the fort on the lawn chair behind them) arrived between 6 and 7 am Monday morning to make it to the front of the line. The group works at the same company. They booked off vacation time to wait in line.

They’ve been in line for the entire day, as the store opened and closed for its regular hours. “We were here before the store opened. We watched people walk to work, and then laughed at us when they were walking home from work,” said Tyler, who also plays Starcraft II competitively.

“Blizzard owns us,” said George, on behalf of the entire group of Diablo veterans. “We’ll do anything they say.” They described the plan to come to the midnight launch, including coming in a large enough group to get food while others keep their place in line.

Anton Richter showed up dressed as the archangel Tyrael, including a garb that completely obscured his face and possibly scared the heck out of a few pedestrians.

The 18-year-old was introduced to Diablo II by his father, and his love of the games grew from there. “I’ve just been a fan of Blizzard games for a while, I really like the Diablo games, and I just felt like doing something for this.”

At the new EB Games store closer to Yonge and Queen Streets, the doors were wide open well before midnight. Clerks clocked in the sales ahead of the actual launch. At 12:00 am, those who had already paid needed only to show their receipt, get a stamp and pick up the game.

The two-tiered launch system had worked out for EB in the past. According to several of the associates and supervisors working the midnight event, this allowed them to move roughly 500 copies of Call of Duty: Modern Warfare 3 during its midnight launch last November.

The EB Games store five minutes to midnight. Fans, their receipts in hand, slowly filed to the resigter area for a second time to pick up their copies of Diablo III. They then walked up and down the streets, carrying their bags and purchases proudly.

Of course, had they known the ensuing days would be plagued with server errors and downtime, perhaps some of them might not have made the trek for the launch. But for the moment, it was a coming together of fans and die-hards for the most pre-ordered PC game of all time, and something surely to be remembered.