A guy walks into a bank. He pulls a gun, starts shooting, and ties up some hostages. Then he turns on the radio and starts singing along to Bob Dylan.

The robber in question is Lars Nystrom, played by an off-the-wall Ethan Hawke, inspired by real-life criminal Jan-Erik Olsson, who made headlines and psychology class history with his 1973 robbery of the Norrmalmstorg bank in Stockholm, Sweden. Stockholm dramatizes the story of how Olsson endeared himself to his hostages, who eventually identified with him, rather than the police, and inspired the phenomenon known as Stockholm syndrome. The film reunites Hawke with writer/director Robert Budreau following their 2015 Chet Baker biopic Born to Be Blue. It’s a strange but true tale that playfully reinterprets the landmark case.

“I love true crime,” says Budreau, speaking with BeatRoute. “I love a good bank heist/hostage movie, but I was attracted to this story not because of those procedural aspects, but because of the characters, the richness of them. The strange absurdity of it all. The entire situation was almost hard to believe.”

Stockholm walks a razor’s edge straddling black comedy and true crime as Hawke’s Nystrom takes hold of the bank while decked out in cowboy boots and an outrageously bad wig. It’s a very different turn for the Boyhood and First Reformed star, who goes larger than life in a rare comedic performance. The film also casts Girl with the Dragon Tattoo and Prometheus star Noomi Rapace against type as Bianca, the bank teller who eventually falls for her captor even though he’s a violent and unpredictable buffoon.

Budreau says that casting Hawke in a comedic role was part of the project’s appeal and that he, Hawke, and Rapace drew on archival materials, research, and articles to create dramatic interpretations of the characters inspired by the Stockholm affair. “The script is based on an article in the New Yorker by Daniel Lang written in ’75 and it certainly has the seeds of this absurd, dark comedy tone,” says Budreau. “I played that up in the script and then Ethan turned that up even more in his choice of costume and his performance. The original story was about this crazy dude who wore face paint, used a strange accent, pretended he was someone else, had these ridiculous glasses, went into a bank and immediately played Elvis Presley’s ‘Lonesome Cowboy.’ Everything about it was crazy.”

When it comes to Rapace, Stockholm begins and ends with a shot of Bianca and the Swedish star’s subtle performance reframes the audience’s perception of the character after she’s survived the bizarre ordeal. “For Noomi, I was really excited about her playing against type because the film is kind of about Bianca’s awakening,” explains Budreau. “By the end of the movie, even though one thinks she should be a victim, she empowers herself and awakens.” Best known for playing tough heroines, Rapace channels a different kind of strength, modest and unassuming.

“Noomi is a very strong spunky woman, but for her to play this very feminine conservative bank clerk is so anti-Noomi,” observes Budreau. “It was great because it was bubbling under the surface and the subtext. Seeing actors playing against type is always interesting for me and I think audiences like to see that too.”

Seeing the actors disappear within the characters drives the absurdist tone since one is never sure what to expect, partly because the actors step outside the expectations one brings to their star personas. “Even on set, Noomi really didn’t know what Ethan was going to do from moment to moment, which is what you want,” says Budreau. “It’s exciting. It keeps them on their toes.”

Budreau also says that getting such unexpected work from the actors helped the film’s tightrope walk with tone. “The Coen Brothers do black comedy and crime capers, but [they have] a more heightened, stylized, uniform tone throughout,” says Budreau. “This film has elements of that, especially at the start, but it’s actually quite different in that there’s genuine drama and fear that isn’t stylized. And so to thread the needle between Ethan’s larger than life character and black comedy, and Noomi’s more grounded, realistic, dramatic performance was the great challenge and what the Stockholm syndrome story was about.” The tone plays with the rich psychology of Stockholm syndrome that audiences, scholars, researchers, and artists continually find fascinating. It can have people laughing one moment and crying the next, adapting to the mood of the moment to survive. 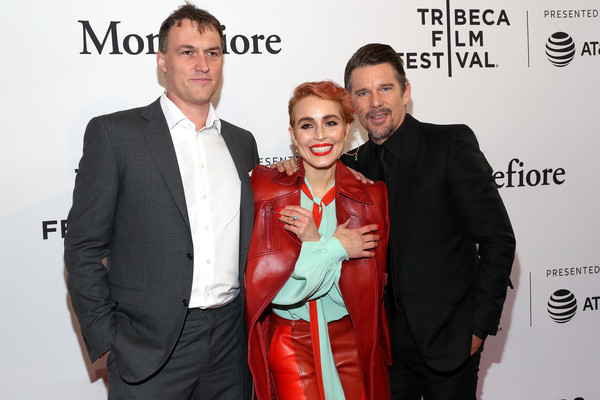 Stockholm syndrome fuels many a big screen romance, as one finds traces of it in films ranging from Beauty and the Beast, Dog Day Afternoon, Out of Sight, Three Days of the Condor, and Labor Day. When asked why this psychological condition proves so cinematic, Budreau says one can trace it throughout history, long before movies were even made and survival of the fittest fuelled human evolution. “I think humans have a great capacity for empathy and normalizing,” observes Budreau. “They start to like see the good in their captors to try and make sense of life. And then that turns into a bond and a relationship in some cases. People do very strange things when they want to survive.”

Budreau says one other pleasure of the film was finding creative ways to recreate 1970s’ Sweden in Canada. “It’s one of the challenges of these international coproduction projects,” says Budreau, who shot most of Stockholm in Hamilton, Ontario with some exteriors in Sweden. “For Born to Be Blue, we made Sudbury in the winter into California and New York and the ’50s and ’60s, which seemed to me the most extreme thing one can do,” says Budreau. “Doing an interior bank in Hamilton was easy peasy compared to that.”

Central to setting the tone and era for the film, however, is the music of Bob Dylan. Whereas Olsson stomped around the bank in cowboy boots belting out Elvis Presley’s “Lonesome Cowboy” and Roberta Flack’s “Killing Me Softly,“ Stockholm weaves a quartet of Dylan songs throughout the film as Nystrom sings along to the radio, which he also uses to monitor the police, who are humorously out of their depths in dealing with the situation.

“Dylan has always been my biggest artistic influence,” says Budreau. “I’ve kind of been obsessed with Bob since I was like a teenager, so I always dreamed of working him into a movie organically.”

Budreau says that, in keeping with the facts of the case, he tried to use Presley’s “Lonesome Cowboy,” but wasn’t able to get the rights. “I had to get the rights beforehand because they actually sing it [in the film],” says Budreau. “So I thought, what about the late ’60s, early ’70s, Dylan? I was able to get ‘Tonight I’ll Be Staying Here with You.’ The music became something intentional on the character and not just a random thing.” The songs guide Nystrom’s abrupt mood swings and the film’s tonal shifts, and give a playful element to the character that Hawke thoroughly embellishes.

Dylan’s rebellious spirit and the familiar tunes make Hawke’s volatile anti-hero surprisingly sympathetic. Watching the film ultimately feels a bit like experiencing a bout of Stockholm syndrome on one’s own.