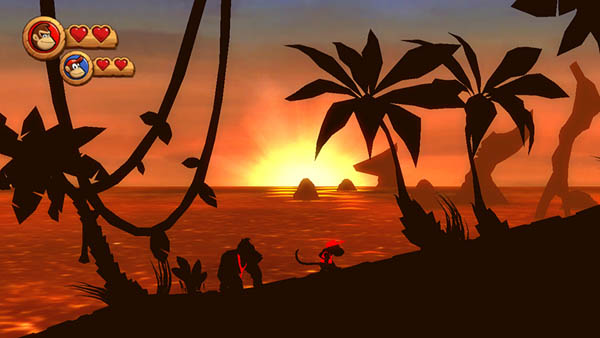 At last month’s Nintendo Holiday Preview event, we got to try out the final build of Donkey Kong Country Returns for the Wii. At the beginning of the play session, we had 47 lives. By the end of it, we had a big fat Game Over.

Part of the reason is the ghastly fact that when playing the 2-player co-op mode, both Donkey and Diddy Kong’s deaths are added toward your life count loss. More importantly is the fact that this 2-D platformer is incredibly hard. This isn’t like the predecessors on the Super Nintendo. DKC Returns is Mega Man Hard ™.

Retro Studios is best known for its Metroid Prime series on the Gamecube and Wii, but creating a new 2-D side-scroller for the ensemble-cast Kong family is a very different project indeed. From what we’ve seen so far, the end result is sure to be a quick fan favourite, although some new additions might raise an eyebrow.

The first major addition is the Wii Remote’s motion control abilities. Unlike the minor additions we saw in New Super Mario Bros. Wii, DKC Returns’s Wiimote functionality is a major part of the game that you won’t be able to avoid using (so much, in fact, that Classic or Gamecube Controller functionality is not an option). To barrel roll through your enemies, you’ll have to shake the Wiimote while running. It’s just as useful as it was in the SNES classics, but we doubt we’ll be using it as often as we did before simply because it would tire us out.  Ducking and shaking the Wiimote will allow you to blow flowers out of the way revealing hidden banana caches, or neuter some enemies covered in fire, exposing their weak points.

Shaking the Wiimote and Nunchuck up and down (like in the racer Donkey Kong Jungle Beat) causes Donkey Kong to pound the ground with his massive hands, enabling him to break apart terrain and open new pathways. It’ll be essential to finding the piles of hidden items throughout the game. This time you’ve got puzzle pieces and golden coins along with the K-O-N-G letters to find, although spokesperson Ryan was tight-lipped about exactly what these new items unlock. “We just don’t want to spoil it for everyone. We want the players to find these things on their own, and as much as you’d like to know some secrets I won’t do it,” he said with a wry smile.

He didn’t give us any advice on how to get said items either, which added icing to the difficulty cake. For instance, we got some quality time with one of the new mine cart levels. We had to avoid overhanging crystals that would crush us unless we ducked, and enemies throwing bombs that collapse sections of the rails – all while collectible items hung in dangerous locations prodding us to take more and more risks. Old school fans who remember going to great lengths to collect the Hero Coins in DKC2 will have no shortage of torturous challenges this time around. Diddy’s jetpack and peanut gun abilities will doubtlessly be needed to get at some hidden treasures, but Ryan assured us that 2-player co-op tactics won’t be required to pass any of the levels – you can get to the ending solo with Donkey Kong if you wish.

Simply getting through the levels proper proved a great challenge, but we’re not sure it’s always for good reason. Donkey Kong’s platforming physics seemed a little floaty and slippery considering the big ape’s girth. Often we would slip right off small platforms, seemingly from the front edge and off the back one, despite careful timing. Our initial impression is that it’s a little too unforgiving, but multiple playthroughs will probably mitigate this. The levels were also very long, lasting several minutes, with sparse checkpoints ensuring you’ll have to repeat sections multiple times if one obstacle starts to grind your gears. “Making the game complex at certain parts is about offering a challenge that’s very rewarding to get through,” explains Ryan. “We think that gamers of all abilities are going to find the complexity to be something that they can handle and get through, and it’s very rewarding when you do it.”

If things get too hard, the Super Guide option that we’ve seen in the recent Super Mario games will appear. You can choose to put the game on auto-pilot, and an albino-haired Super Kong will pass the level for you – without collecting any of the hidden or out-of-the-way items, of course.

Rambi the rhino was the only animal companion they showed so far, but riding him is just as empowering as it used to be. This time he can even trample through spikes lining the floors and walls, revealing even more possible secret locations. We saw Squawks the parrot circling the World Map, and as an item in Cranky Kong’s shop, though exactly what he does is unknown at this point.

There are several areas on the World Map, and they were all named as simply Jungle, Beach, Mines, Forest and so on. If those are their final names, we’re a little disappointed considering the imaginative region names in the old games, like Gloomy Gulch and Gangplank Galleon.

Donkey Kong Country Returns will hit store shelves this week. Retro have created a game that hits all of the nostalgic notes of the SNES classics with astonishing accuracy. Players will have to judge for themselves whether the new motion control elements and sadistic difficulty will help or hinder the waves of joy to come.