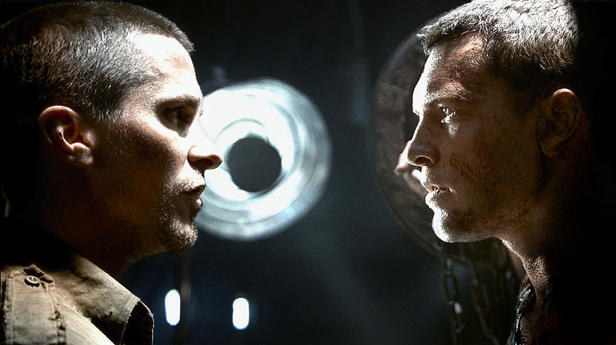 Terminator Salvation wants to be a great film, but it has big shoes to fill.  The first two Terminator films were excellent, while the third was mediocre at best. Terminator Salvation aims to right the wrongs of Terminator 3: Rise of the Machines, bringing the franchise back to the darker more serious tone of the first two. The film has a fairly solid concept: a post-apocalyptic war against robots. The movie even has some great actors who turn out solid performances and the special effects are good. How could you go wrong? Based on my description, you would think this movie has all the makings of a great summer blockbuster: unfortunately this is simply not the case.

I really wanted to like Terminator Salvation. I consider myself a fan of the Terminator series and I was skeptical about the involvement of McG, who directed the Charlie’s Angels movies which I dislike with a passion.

All my skepticism about McG went out the window when I saw the second theatrical trailer, it completely sold me on Terminator Salvation. The trailer made the movie look amazing, which is the point of a well made trailer—it also made me realize that I’m a sucker for a well placed Nine Inch Nails tunes in movie trailers (cf. 300).

If the trailer were the movie, I would have taken back everything bad I’ve ever said about McG. However, as I’ve learned recently the trailer is not the movie, and as a result I still have plenty of bad things to say about McG.

Joseph McGinty Nichol—I mean McG—is a competent enough director, but this movie needed a good director. There are so many little things wrong with Terminator Salvation, things that a good director would have corrected during the production.

For starters, the script for the film is simply awful. The film features many talented actors, including Christian Bale, Sam Worthington, Anton Yelchin, Helena Bonham Carter, and even Michael “God Damn” Ironside, but they are given very little to work with. No matter how talented an actor is they need good material to shine, the screenplay for a film really is half the battle.

The actors try, they really do. Christian Bale is a decent actor, but he’s alternately yelling at anyone and anything in sight or growling Dark Knight-style in every other scene. Anton Yelchin was really good as a young version of Kyle Reese, he makes the role played by Michael Biehn in the original very much his own. Bryce Howard is good in the few scenes she’s in, but has no time to develop her character, she’s a non-presence in the movie. Michael Ironside brings the dour demeanour he’s famous for, but his role as the Resistance leader is shallow and underdeveloped. Helena Bonham Carter is utterly wasted, her character’s entire purpose is to relay exposition to the audience. Common’s laughable delivery of the three lines he has was unfortunate. I think the musician should stick to what he does best.

Often the actors’ experience and competence manages to shine though the terrible script, but this doesn’t happen enough. Speaking of actors and their performances in relation to the script, I must mention Sam Worthington and Moon Bloodgood, who are arguably the main characters of the film.

Sam Worthington is going to be a big star, his performance almost makes Terminator Salvation worth seeing. The fact that he can generate sympathy for his character, that Marcus Wright is a likable character at all is simply amazing. Worthington is good in the film, but he’s given literally some of the worst lines I have ever heard in a major Hollywood picture. Worthington’s character could have been far more nuanced and interesting, but not enough time is spent with him for you to ever really care.

His relationship with Moon Bloodgood’s character is painful to watch.  The dialogue between the two is stifled by one awful line after another. Where Worthington can get away with it, Bloodgood often cannot: she’s simply not as good an actor.

One of the major problems I had with the film is that one of the central plot points of the movie is exposed completely and absolutely by the trailer and all of the associated marketing for the movie. Marcus Wright (Worthington), is a cyborg who doesn’t know he’s a cyborg for most of the movie.

Almost the entire first hour of the movie involves the characters and the audience trying to figure out who Marcus really is and what his motives are. As a result half the movie feels like a waste of time as the story goes through the motions of revealing he’s a cyborg. The big reveal, that holy-shit-he’s-a-robot moment, is utterly ruined for most people because they already knew the guy was a cyborg.

Speaking of cyborgs though, the special effects were great. The movie is dedicated to the memory of the late, great effects genius Stan Winston, and they don’t let him down. There is a nice balance of practical and computer generated effects, and they are blended together very well. The terminators themselves looked amazing and believable, not shiny and fake like some prior iterations. The previous Terminator film relied too heavily on CGI, if there is one good thing I can say about McG, it’s that I’m glad he took the effects back to basics.

The much talked about computer generated cameo by everyone’s favourite Austrian muscle man worked surprisingly well. I’m sure it was a difficult effect to pull off, but using practical and computer effects techniques in conjunction really sold it for me.

Effects-wise I really liked the film, but the action overpowers the movie. Gunfire and explosions drown out the characters and the story. Maybe McG realized that the script was absolute shite, and decided that if he had enough to explosions in the film people wouldn’t notice. Also, it wouldn’t be a McG movie without a character riding a dirt bike and going off a jump at some point… just saying.

Terminator Salvation really is a mess of a movie. Most people are just going to go see for the action and effects, which are in no short supply. If that’s all you want, then I highly recommend the movie.

But there is so much wasted potential, the film just strikes me as one giant lost opportunity. The movie doesn’t have heart, something that made the original Terminator and Terminator 2 so great. Salvation is a pale imitation, when it could have been so much more.