Dork Shelf looks back at the video games that took us by surprise in 2013, either by exceeding our initial expectations, or by giving us something new and exciting despite little to no fanfare. 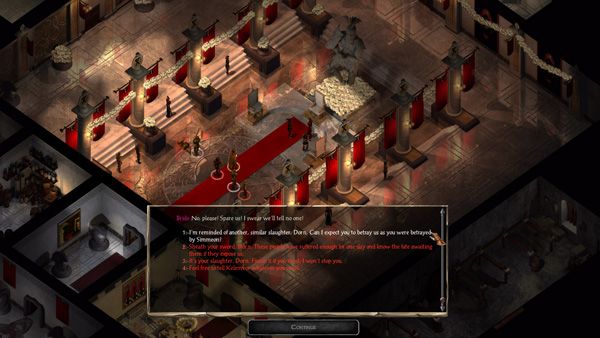 The game that surprised me most this past year also became my favourite game of 2013: the Enhanced Edition of Baldur’s Gate 2. I knew I’d like the game – the BioWare precursors to Dragon Age had been a huge part of my formative gaming years, and I really enjoyed 2012’s BGEE – but the sequel goes above and beyond. With awesome graphics, a quick-loot function, both expansions, and new characters (including the availability of a female same-sex romance option, finally), Overhaul Games and Beamdog really outdid themselves. I don’t even want to tell you how many hours I’ve sunk into this old-school RPG. I’ve started dreaming about Pirate Lords and Slayers. It’s too many. – Sam Maggs

If Most Surprising is to be defined as the game that I just totally didn’t see coming, then the award has to go to Camp Keepalive. A straightforward tactics game with an aesthetic and a pixel count borrowed from the 1980s, Camp Keepalive takes place in a generic summer camp overrun with monsters from various slasher films. You control the group of counselors trying to shepherd hapless campers to safety.

While Camp Keepalive deserves mention for its rock-solid gameplay, the killer soundtrack and spot-on horror references put it over the top. It’s not the best game I played all year, nor is it the most memorable or the most deeply moving. But it wasn’t anywhere near my radar entering 2013, and I had a blast fending off waves of Pleathermasks and Clowns. – Eric Weiss

I pretty much hated every AAA title that I played this year, so this was a nice surprise for me. I’ve always been a fan of the series, despite its problems (what can I say, I just like climbing on historically accurate replicas of cities), but I was not expecting to like this one as much as I did. I wasn’t a fan of the naval combat in Assassin’s Creed III, but for the most part it was much improved in AC IV, and it really felt like being a pirate at the height of its golden age. – Megan Patterson

Mario Kart clones are a dime a dozen, but good ones are a sight to behold. With Mario Kart 8 not due for the Wii U until next spring, Sonic-A-A-S-R-T fits the bill quite nicely.

You have to give Sega credit for showcasing its back catalogue when so many of its characters have since fallen into either obscurity or myth. Who would guess that in 2013 you could play as Beat from Jet Set Radio, Vyse from Skies of Arcadia and Alex Kidd from your big brother’s Master System? And did I mention the level that includes the goddamned skeleton from the Golden Axe character select screen?

It combines 25 years of fan service with a rock-solid Kart racing backbone. If Mario Kart were this experimental, we would reach the kart racing game singularity. – Jonathan Ore

If you told me at the beginning of the year that my favourite game of 2013 will be an iOS platform puzzle game, I would have laughed at you. As it turns out, Year Walk surpassed my expectations with its brilliant horror narrative and haunting soundtrack. It’s an intense, highly stylized and surreal experience that not only kept me staying awake for several nights reading into its mythology, but changed my outlook on gaming. In a couple of hours my iPhone brought me more immersing gameplay than what I had played on my PS3 all year. It’s clear that Simogo Games will continue to impress as their title Device 6, the follow up to Year Walk¸ was also an impressive and unique game. – Soha Kareem

Bohemia Interactive gave hundreds of thousands of gamers the greatest surprise of 2013 by releasing the much delayed standalone version of DayZ just in time for the holidays. Though still in an early alpha state, designer Dean “Rocket” Hall’s retail version of his popular zombie survival mod for ARMA II retains everything that made said mod such a joy/terror to play. Washing up on the shores of the post-apocalyptic, post-Soviet state of Chernarus, you must compete with dozens of other players to survive, scavenging clothing, food, water, weapons, and other supplies, never knowing if your next encounter with a zombie or other survivor will be your last.

As a long time player of the DayZ mod, I was excited to finally get my hands on “Standalone” and was extremely pleased to find that, even in such a bug-filled condition, the game more than lives up to the hype. With new features being added almost weekly, the already great DayZ has incredibly bright future ahead of it. Anyone in Cherno?! – Will Perkins

Which games surprised you the most in 2013? Let us know in the comments.