Whether fairly or not, it’s hard to talk about Final Fantasy VII without focusing – perhaps too much – on the mid-game death of one of its major characters.

At the end of Disc 1 in the original Playstation version, Aerith the flower girl becomes a sudden and tragic casualty in the fight against the wraith-like supervillain Sephiroth.

This happens many, many hours after we leave the industrial megapolis of Midgar. The Final Fantasy VII Remake, however, extends this prologue into an entire full-length game of its own.

At the end of the Remake, we’ve still got (presumably) many hours, or even several games’ worth, of adventuring before we (presumably) get to her regularly scheduled departure.

It might leave players wondering whether this initial instalment will have anything approaching the same level of stakes, drama or, indeed, tragedy.

Square-Enix’s team takes this narrative challenge head-on, by expanding on another dark moment in the original text and magnifying it to the level of a war crime.

Around midway through the Remake, the evil corporation Shinra deploys a small task force of security officers, led by their black-ops, secret agent team the Turks, to drop the Sector 7 plate onto the slums below.

It’s a major turning point in the original’s plot, literally burying Cloud, Barret and Tifa’s home base and killing off the minor characters Jessie, Biggs and Wedge, who made up Barret’s freedom fighter squad Avalanche.

Aerith is also captured by the Turks in this exchange, so Cloud and the gang make their way to Shinra Headquarters to save her.

A reminder: Midgar is a circular city whose classes are literally stratified into two levels: the lower classes live in the slums on the ground, while a giant plate sits atop them, where the middle and upper class live. The plate blots out the sun for the labourers living on the edge of poverty, while giant load-bearing pillars keep the plate aloft for those living “topside” to enjoy the fruits of Shinra’s Mako extraction. This isn’t a subtle metaphor.

In an important new scene in the remake, we see Reeve, the company’s only executive who isn’t a paper-thin moustache-twirling villain, pleading with President Shinra to put the plan on hold.

Importantly, a number is put on the table: Sector 7 is home to 50,000 people, all of whom are put in mortal danger by their corporate “benefactors.” 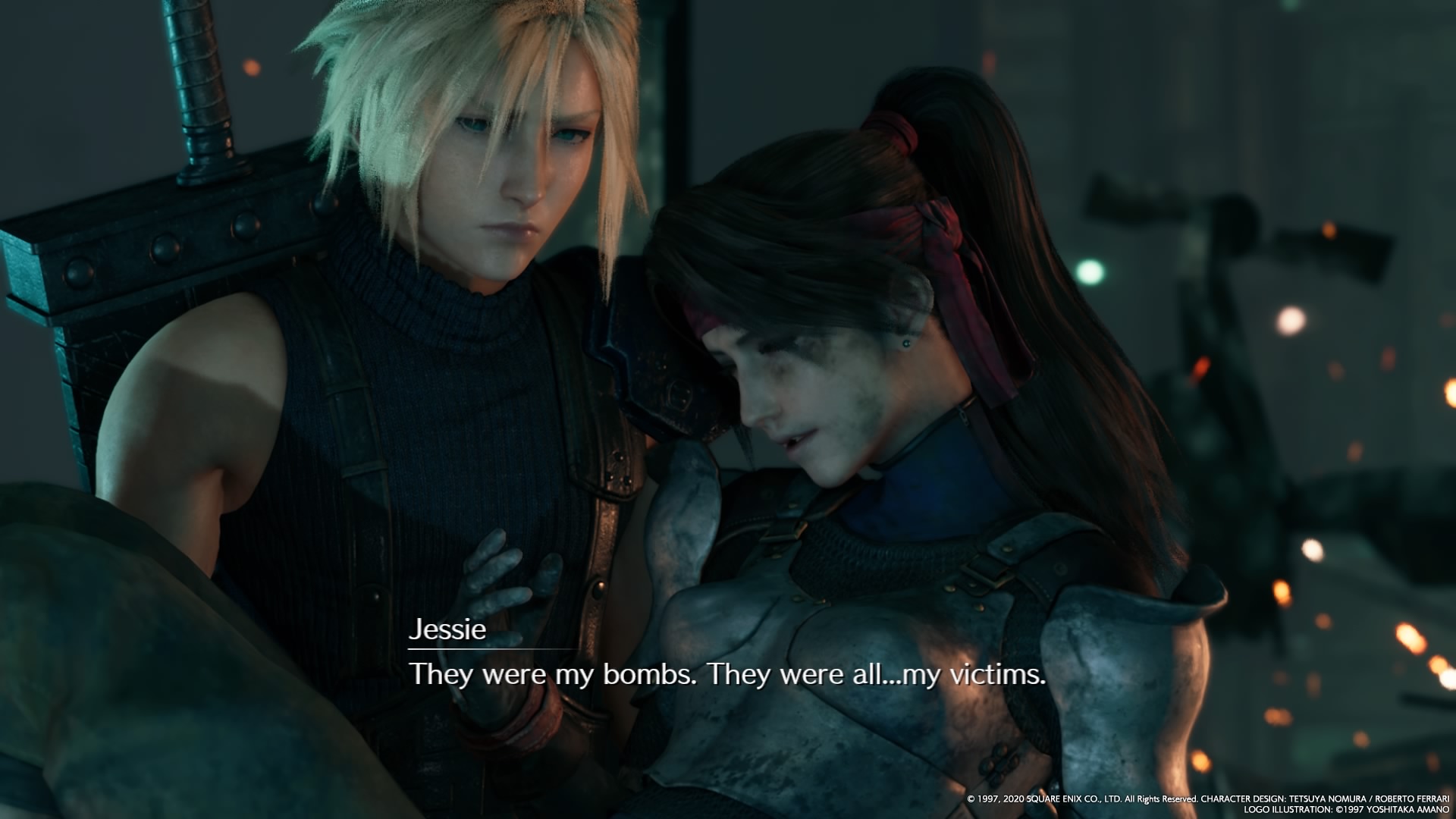 The remake’s rendition of the event, dubbed Chapter 12: Fight For Survival, generally follows the game’s playbook for expanding the original’s scenes into full-blown epics. Cloud and Tifa’s sprint to the top of the Sector 7 pillar is punctuated by more battles, cutscenes and bombast.

No-name Avalanche fighters and Shinra soldiers shoot it out amongst each other to pump up the body count. Rude joins his Turk partner Reno at the top of the pillar for a frenetic boss battle.

They serve well enough, but don’t add much. Biggs and Jessie get some emotional deathbed scenes, making heartfelt speeches before presumably passing out from their injuries, but they ring a little cliché.

More interesting is what happens on the ground. The Remake generally does a great job with giving some screen time to the regular citizens of Midgar, who collectively build the city into more than just a backdrop for the main players.

Wedge rallies the people in an effort to evacuate as many citizens as possible. Members of the neighbourhood watch clear the roads and gather families and children to ensure their safety.

Most importantly, the player takes control of Aerith as she searches for Barret’s daughter Marlene, who is hiding in the Seventh Heaven bar. It does a great job of fleshing out events that transpired offscreen in the original, while building on the personalities of the cast.

We get some well-appreciated time with Aerith in the lead, and we get a moment of motherly tenderness when she finds Marlene and convinces her to escape to safety together.

Crucially, the wraith-like creatures we’ve seen before take an interest in Aerith’s actions. Even more surprisingly, we get tiny hints that she might have an idea of what they’re up to.

Less successful are new scenes with Reno, who expresses disgust at the mission to destroy Sector 7 before going through with it anyway.

The Turks have always been fan favourites, but their role in a state-sanctioned mass murder is made far clearer this time around. I don’t know if there’s a redemption arc in the making of Reno and Rude, but at the moment I don’t see their quirky hijinks elevating them to more than a Ginyu Force Gestapo.

‘Hold onto this anger’

For all the pieces Square-Enix put into place to make the collapse even more spectacular before, it’s the aftermath that really hits home for me. Moments after the disaster, we see what really makes Tifa and Barret tick.

Tifa, who has shown reluctance to take part in Avalanche’s violent rebellion, wonders whether it’s their fault that this has all happened. She’s the reluctant resistance fighter, who takes on a personal level of guilt for the people they harm along the way.

There’s an air of yearning for a status quo in what she says, but I think you kind of need that voice of conservative-leaning conscience as a semi-regular check against the more radical elements of the team. Someone needs to keep asking what they’re really doing, who they’re fighting for – and against – and whose ultimate fault it is when people get hurt along the way.

Barret, clear-eyed even in the face of unimaginable personal tragedy, knows that only Shinra’s leadership had the capability and callousness to carry out such an act.

In one of the best acted moments of the game, Barret tells Tifa to hold onto her anger. It’s not hard to see why people would follow Barret to the ends of the earth – people like Tifa, who despite her martial arts training, was essentially a civilian.

‘We have to go back’

In the original game, Cloud, Tifa and Barret are propelled immediately to rescue Shinra HQ – symbolically at the top, and centre, of Midgar.

The remake, instead, lingers on the disaster that’s befallen the city. After regrouping at Aerith’s home, where we learn more from her adopted mother and are reunited with a safe-and-sound Marlene, the three heroes instead go back to Sector 7.

On the long road to the sector’s shattered remains, we see the human toll recounted by the survivors. Everyone’s lost their homes and loved ones. Some contemplate whether they can rebuild, or should try finding a life elsewhere.

This is now a humanitarian crisis. As Sector 7’s survivors flood into Wall Market in the nearby Sector 5, it also becomes a refugee crisis.

Still others, egged on by the Shinra-owned news network, wonder whether it was the doing of Avalanche, or Wutai – the far-away foreign power that, in a blunt analogy to the real world, local powers appear to manipulate into political capital.

You could argue that this lengthy detour is a symptom of open-world game syndrome (even though this isn’t strictly an open-world game): in the midst of the main objective with time-sensitive urgency, the hero takes the time to talk to everyone and carry out every errand along the way.

But here, it feels different. Sector 7 is Barret and Tifa’s home. It’s natural for them to go back, see what pieces are left to pick up, assess who may have survived. The Shinra attack has personally hurt these characters. Before seeking revenge or justice, they have to see the aftermath for themselves. They need to grieve.

We even get a brand-new area, introduced at just the right time. While surveying the ruins, Barret drops down a hole and finds himself in a secret Shinra research bunker – the same bunker that a random citizen referenced earlier in the game.

Barret makes his way through tunnels hewn into the rock, and the first thing you see are rows and rows of those little metal boxes that you’ve seen throughout the game. If you destroy them, you might find a potion or other helpful item.

They also break apart with a satisfying clang. I aimed with Barret’s arm that is also a Gatling gun, and let loose. I destroyed every single one. I imagined Barret would have wanted to do the same: unleash his anger on hundreds of symbols of the corporation that he’s fought against for years, that’s taken so much from him.

Cloud and Tifa meet up, and the three go one to wreak havoc on the research lab, which houses some new monsters borne out of a life support tank.

In the midst of all this human loss and characters drowning in sorrow, the detour gives the player some time to just hack and slash away with reckless abandon. It’s a wonderfully paced section that also adds freshness to the proceedings.

These few chapters encapsulate the most successful parts of the Remake’s mission. It revisited a major moment I remember from the original and gave it additional context and background while adding entirely new tangents that felt like it’s building a better whole.

I do wonder, though, what these extended looks into the lives and psyches of the main cast will mean for the future of the entire Remake project, however long that may take. But that’s probably a question better left another time.