This morning TIFF hosted the first press conference for its 38th rapidly approaching festival (running Sept. 5-15). As always, the conference was well attended by just about every media outlet that covers anything remotely related to film and entertainment. The hungry writers showed up early (as coffee, fruit and pastries were in abundance), but the majority of the press filled the theatre seats minutes before festival organizers Piers Handling and Cameron Bailey took the stage to announce 17 Gala films and 56 Special Presentations. 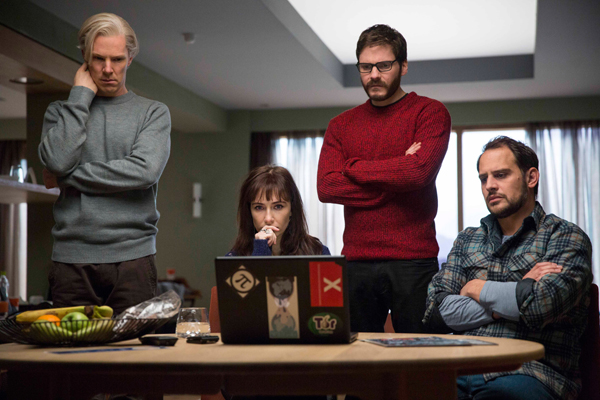 2013’s opening Gala film will be The Fifth Estate, which covers the WikiLeaks debacle while the festival’s closing film offers a different kind of crime caper with Life of Crime, based on Elmore Leonard’s novel The Switch. Selected trailers were screened, three of which featured Benedict Cumberbatch (The Fifth Estate, August: Osage County and 12 Years a Slave), so count on some Sherlock fans sleuthing around the city in search of the enigmatic actor. Bailey also acknowledged this (cumber)batch of films by answering the festival’s campaign question ‘what’s your festival personality?’ with “I guess I’m a Benedict Cumberbatch fan.”

While the Canadian program won’t be announced until the next press conference (August 10), the Galas will feature three Canadian films: Jonathan Sobol’s The Art of the Steal, Don McKellar’s The Grand Seduction and Jerimiah Chechnik’s The Right Kind of Wrong. What I found rather interesting (though not surprising), is the amount of international films with Canadian directors that were announced. This includes Atom Egoyan’s Devil’s Knot, Jean-Marc Vallee’s Dallas Buyers Club, Jason Reitman’s Labor Day, Denis Villeneuve’s Prisoners, Paul Haggis’ Third Person, and the Mike Myers-directed documentary Supermensch: The Legend of Shep Gordon. This just reaffirms that while we remain a hub for production and special events, our talent still usually goes elsewhere to fund their features.

Other titles announced that are sure to create buzz include Mandela: Long Walk To Freedom (timely and already buzzed over), Alfonso Cuaron’s Gravity (Clooney and Bullock in space), Kill Your Darlings (Daniel Radcliffe as Allen Ginsberg), Joe (David Gordon Green goes South and gets serious again), MARY Queen of Scots (excellent trailer screened at the conference) and Jim Jarmusch’s Only Lovers Left Alive, to name just a few. Personally I can’t wait to see Koyaanisqatsi director Godfrey Reggio reunite with composer Philip Glass for more contemplation on modern living in Visitors.

With over 300 films to be screened at the festival, this is only a small piece of the tasty pie that’s baking. While Galas and Special Presentations are where 90% of the high profile films screen, I’m still holding out hope for the only two films I was waiting to hear announced today: the Coen brother’s Inside Llewyn Davis and Terry Gilliam’s The Zero Theorem. So for now, if someone asks me what my ‘festival personality’ is, I’d probably answer with something like “cautiously optimistic.”