Seeing as I’ve been in their presence for several years now, it’s still a surprise to me when I meet people who are not familiar with the phenomenon that is the hipster. Existing mainly within major metropolitan areas, they’re usually artsy, skinny jean wearing, indie-rock listening, vintage hunting, irony loving youths who, like so many generational ‘fringe’ movements, end up looking the same by trying to look different.  I’m not sure where this began, but it reaches as far as Eastern Europe, Russia even contributed a documentary to this year’s Toronto Film Fest about their own youth culture aptly titled Hipsters. Another defining characteristic is that a hipster will almost never identify themselves thusly, as this would be implying that they are part of a larger trend and not the most original person that ever lived.  One thing that keeps them secure in their individualism is liking obscure things, which is why I like to use this joke when defining them:
How many hipsters does it take to screw in a light bulb?
You know what, it’s actually a really obscure number, you’ve probably never heard of it.

That being said, every now and then they can begrudgingly unite behind something that is mainstream. I predict that this Fall will actually see two such (seemingly unlikely) films battle it out for hipster supremacy. With their era-transcending outfits and love of anything postmodern, it can be said that making the old new again speaks to their more nostalgic sides; which is why the upcoming release of two children’s book adaptations will probably find their movie audiences a little older than the source material’s readers. Maurice Sendak’s Where the Wild Things Are (Oct. 14) and Roald Dahl’s Fantastic Mr. Fox (Nov.16) will likely earn a fair portion of their box office return from those who usually don’t like to pay more than $10 for anything made this century unless it’s a specialty poutine.

Below I examine some similarities between these films while trying to determine which one has greater hipster cred.

Where the Wild Things Are is directed by Spike Jonze (b. 1969) who had his breakout film in 1999 with Being John Malkovich. This is his first film based on previously existing material and not on an original screenplay by Charlie Kaufman. Even though this is only his third film, he has never been considered irrelevant.

The Fantastic Mr. Fox is directed by Wes Anderson (b. 1969) who had his breakout film Rushmore get wide distribution in 1999. This is his sixth film and his first adaptation.

While both are releasing their most family friendly films to date in their 40th year, it can be said that neither has yet to live up to the potential they displayed just over a decade ago.  These two were leading figures in the late 90’s now-not-so-new-school of filmmakers and have arguably treaded water since.  The same can be said of David O. Russell, who I hope will follow suit and give us his take on Goodnight Moon someday soon, though I hear children really test his patience.

Hipster Cred: I think it’s a draw on this one. The fact that Anderson has made twice as many features as Jonze is balanced out by the impressive archive of music videos under Spike’s belt. Spike Jonze’s off-set, super cool persona (doing things like marrying Sofia Coppola for a couple years) accounts for a good portion of his hipster regard.  But Wes will always be credited as one of the first to make pretentious, socially inept geniuses with dour faces and odd fashion senses so desirable to too many of my generation.

The blending of Jim Henson creature shop’s animatronic “suitimation” with live action and CGI looks incredible in the Wild Things‘ trailer. The Wild Things look like the Henson characters I fell in love with as a child in films like Labyrinth, while also remaining extremely faithful to the art of the book. I’m sure these time consuming effects had a lot to do with many of the film’s production and release delays.

Speaking of time consuming effects, I’d say that stop motion method of animation used for Fox is the most notorious for being painstakingly slow work.

Hipster cred: Lots of kids that were goths ten years ago and emo five years ago may now fall into hipster territory, and the only thing that’s remained consistent during these formative years is their love of The Nightmare Before Christmas. As wonderful as it will be to have Jim Henson creatures on screen again, the stop motion animated Mr. Fox takes hipsters hearts on this one. Actually, Nightmare‘s director Henry Selick was originally slated to animate this film, but did Coraline instead. I wonder if he felt doing a stop motion Dahl story would be treading over old ground, as he already directed 1996’s adaptation of James and the Giant Peach. 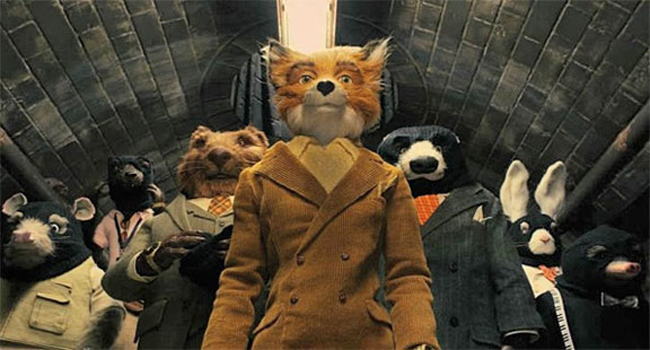 George Clooney and Meryl Streep head the cast with a slew of Anderson regulars in other roles, including Jason Schwartzman, Bill Murray, Owen Wilson, Adrian Brody, and Brian Cox. To my knowledge there is no live action, so I believe all of these contributions are purely oral.

Hipster cred: The Academy- and parental-appeal of Clooney and Streep against the teen angst often conveyed by Dano and Ambrose make this Wild Thing‘s point.  Plus Catherine O’Hara was Sally in The Nightmare Before Christmas. 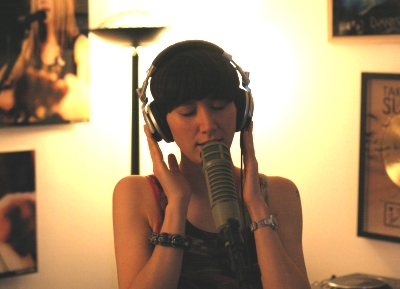 An entire original soundtrack by the Karen O (of the Yeah, Yeah, Yeah’s) and The Kids.

Features four original songs by Pulp’s Jarvis Cocker, who also voices a character in the film.

Hipster cred: I like Jarvis Cocker, but since Karen O’s Kids include members of The Raconteurs, The Bird and the Bee, and Queens of the Stone Age, I’m giving this one to Wild Things. I’ve already listened to the entire soundtrack here, and I think it’s pretty great. Sorry J-Cock. 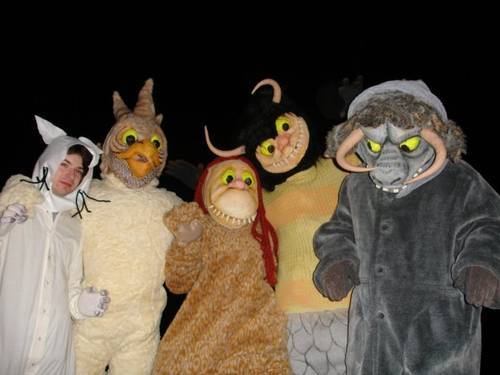 With its release two weeks before Halloween, I wouldn’t be surprised to see hipsters flocking to the nearest thrift stores in order to throw together their own makeshift original Wild Thing interpretations.  Definitely a cheap and fun costume with lots of possibilities and well timed for those who like to be recognized and identified with on All Hallow’s Eve.

Though the sharp, tight fitting suits the characters don are certainly appealing, the transformation into a non-fictional species may prove too much effort for some.

Hipster cred: While it may appear a hindrance that nobody will see Mr. Fox on the big screen ’til a couple weeks after the holiday, this is actually what clinches its win in this category. Dressing as the Fantastic Mr. Fox will allow you to spend the party as smug as a Wes Anderson character, knowing that the confused party goers will all get your costume in a few weeks time.

I may be pretentious, but not so pretentious to think I that can accurately judge the appeal of two equally poised films which have not been released yet. As much as the above may appear as a bit of a tirade on a large group of my peers, I hope nobody thinks I harbour any real contempt toward them. Jonze and Anderson are bright guys and I have faith that these will be genuinely entertaining movies that anyone will be able to enjoy, not just kids and hipsters.