The latest episode of Game of Thrones – entitled “The Last Of The Starks” – was filled with a lot less action than the previous one, but any episode would be hard pressed to top the Battle of Winterfell in that respect. It was more akin to “Winterfell” (S8E1) in terms of plot development, but not quite as preparatory as “A Knight of the Seven Kingdoms” (S8E2). Let’s look at some of the bigger moments and themes from the episode.

Burning of the Dead

To start, we did indeed have a massive bonfire of human bodies as predicted. I actually thought that it was smaller than expected considering that in the latter half of the previous episode the Unsullied, the Dothraki, and the North all lost at least half of their forces. Then again, who’s to say that they weren’t piled on top of each other to create the height of the pyres. We said goodbye to Jorah Mormont (Iain Glen) and it was touching to see Daenerys cry again. Lyanna Mormont was also shown, in the same scene with Jon no less, which was probably supposed to remind us that he’s reflecting on his mother Lyanna Stark, Lady Mormont’s namesake.

Sam said goodbye with Edd which was fitting – if only Jon had been able to show some emotion towards his sworn brothers. Sansa mourned Theon and it was perfect. He saved her and represented the beacon of light in the world. She clung to that and now it’s gone. I find it a little strange that Arya looked visibly upset by Beric’s death. Other than saving her, she hated what he did to Gendry. However, this show of humanity is less strange than her getting sexy with Gendry.

Speaking of the bastard. Daenerys created an ally for life by making Gendry Rivers legitimate, thus becoming Gendry Baratheon, Lord of Storm’s End. While this was a very savvy move on Daenerys’ part – as well as just touching because I don’t know who doesn’t like Gendry – I cannot believe the D&D and the writer made the massive mistake of Gendry’s bastard name. They called him Rivers in the show – as if he was a bastard from the Riverlands. But from my understanding, he was born and raised in King’s Landing, in the Crownlands. This would make him a Waters, not a Rivers. Maybe the show doesn’t care about that minute distinction but we the fans do. What do you think?

There were also touching moments between Davos and Tyrion, and Tormund and Jon. Daenerys on the other hand is visibly alone and not included in the friendships of the Northerners. I think this plays well into her story. She may be this wonderful queen that sets slaves free and breaks the wheel but she’s alone. She doesn’t have close friends to laugh and drink with.

Sansa and Sandor have a touching moment in the Great Hall and I think that this conversation about their past together, however perfect it is, is long overdue. Then again, their interactions in the show have not been as meaningful as they are in the book. The Hound suggests that Sansa would have been safer and not gone through everything she did if she had left with him when he escaped King’s Landing during the Battle of the Blackwater. While this is perhaps true, Sansa says something along the lines of “but Ramsey and Joffrey made me who I am today.”

In the hours since the show aired, I have seen a lot of Sansa hate online (not unusual) and in particular about this scene. What I think a lot of people are failing to grasp with Sansa is that she is a victim. Yes, they might know that because they’ve seen the abuse she’s endured. But what they don’t know is everything that comes with being a victim. It is the stark truth that my abusers have made me what I am today, just as Sansa’s has for her. It is great to express your opinion, but when you are speaking over survivors and victims about surviving and being a victim, please shut up and listen.

Staying with Sansa for a moment and jumping ahead a bit in the episode, I can say I don’t think that telling Tyrion about Jon’s true parentage was the most politically sound thing she’s ever done. It opens her up to all sorts of attacks: online and from other characters in the show. However, just because Daenerys came to help fight against the dead does not mean that Sansa, and the rest of the North for that matter, are obligated to kneel and swear fealty to the Dragon Queen. Jon did that with the assumption that the North would follow his lead. But they don’t approve and are looking to Sansa for their leadership now. As they rightly should. 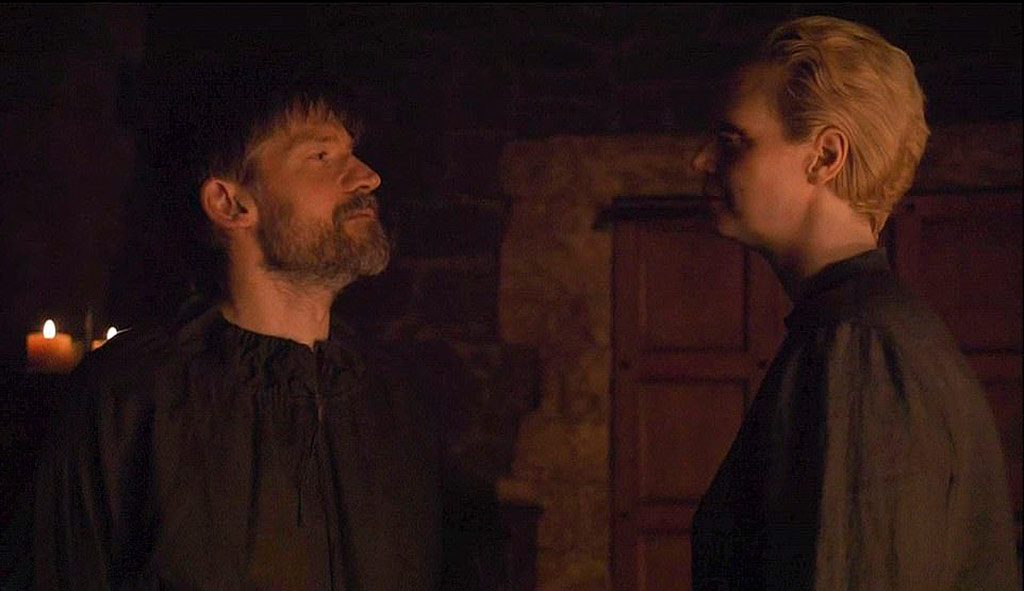 Bramie happens this episode, which I am entirely unsure of how I felt about leading up to their first kiss. By the end of the episode I became very against the newly formed sexual relationship. Because Jaime betrays Brienne, Sansa, and Daenerys to go back to his abusive, unstable sister/lover. This has me so confused. Was his arc all along just to stay with Cersei? Was Jaime’s redemption – from the bath scene through arming Brienne through letting her escape Riverrun – all for nothing? I had hoped that it wouldn’t be.

Then again, wouldn’t it be very fitting for G.R.R.M. (assuming that this is indeed, in some loose fashion, how Jaime’s arc goes in the books) and David and Dan to write a character who we hated in the beginning, fell in love with, and has made progress towards what we believe is to be the “right” or “good” or “moral” cause, only to have him turn out to still love and support and want to be with Cersei? It could just be another example of how people – and characters in Game of Thrones especially – are all grey. No one is black and white.

We have a confirmation of Cersei still being pregnant. However, she has told Euron that it is his child. I find it interesting that there is a deep, sad look in her eyes and on her face when she says “our child will rule them both [the land and the sea]”. This sadness is immediately replaced with a flash of disgust as Euron hugs her in triumph.

Shortly thereafter, Rhaegal was shot down, brutally and multiple times, by Euron – whose Iron Fleet ambushed Daenerys’ at Dragonstone. Really, it was a remarkably smart move on Cersei and Euron’s part. Daenerys lost a couple of ships, a dragon, and Missandei, and Cersei took the win on that one.

In the final scenes, The Mountain beheads Missandei of Narth.

I’ve probably left out a bit of stuff and I’ll jerk awake in the middle of class and think to myself “damn, I should have included this in my recap” – but that’s okay. This episode was long, longer than I expected it to be. In fact, when Tyrion jumped into the water I expected the episode to be over. We did have that extended black screen after all. But alas, it kept going and after that break, it felt like a completely new episode.

For the most part I enjoyed all the little moments individually. Stuck all together? Well, I’m not crazy about it but I don’t have major complaints at this time. The biggest problem I have had with Game of Thrones for the last two seasons is that D&D decided to short us 7 episodes, 3 in season 7 and 4 in season 8. If they had filled up those last 7 episodes, a lot of plots and arcs could have been, or could be, resolved and set up much better than the rush job that we have now.