Dork Shelf: What does Gears 3 offer in terms of new and varied gameplay that sets it apart from the first two games in the series?

Jeff Rivait: The big things that are different, not in terms of specific features necessarily, but number one, the graphics look incredible. It uses the latest iteration of the Unreal Engine so there are some new effects that are enabled by that that make it look incredible. From a campaign perspective it has four player campaign co-op over Xbox Live for the first time in a Gears game. Then when you shift over to the multiplayer front you have dedicated servers for the multiplayer modes now, which will be nice for the people who love the hardcore multiplayer-type game modes. Then we also have a couple of cooperative multiplayer modes in Horde mode, which was introduced in Gears 2 and has evolved now in Gears 3, and then Beast mode, which for the first time you get to actually play as the Locust [in a Horde-type game mode]. 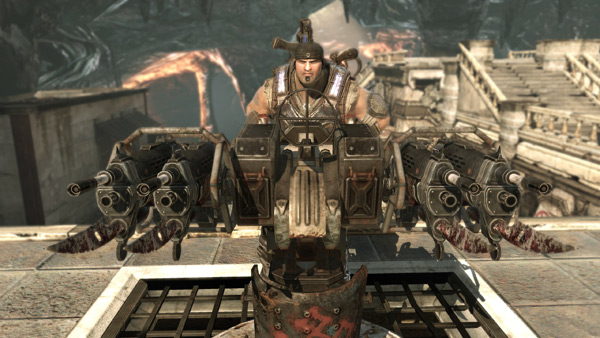 DS: We know you have introduced a number of new weapons into Gears 3 and we were wondering if you could touch on them or talk about what you think you’re favourite new weapon is?

JR: There’s a bunch of new weapons. You have everything from the Retro Lancer, which is an old Pendulum era version of the Lancer with just a bayonet at the end, which is a cool weapon but it’s only really good for medium range, it’s not that accurate when you get to long range. You have things like the One Shot, which is a really powerful sniper rifle type weapon, the Digger Launcher, and incendiary grenades. So there is a whole bunch of new weapons. I think one of the coolest ones that I love using, especially when you’re playing in Horde mode, is the Butcher Cleaver, which typically only the locusts have had but now you can pick that up and run around the map and hack Locusts or Lambents to bits.

DS: Are there any new gameplay features in Gears 3, beyond new weapons, from Gears 1 or Gears 2? Or was it more about perfecting the formula that has already been set up.

JR: I think a lot of it is about perfecting, but in addition to the features I just mentioned, there’s things like for the first time you can play as female Gears in Anya and Sam. There’s some new refined gameplay features such as the Mantle Kick. So if you’re behind cover and the Locust is right behind cover facing you you can actually jump over, kick him out of cover, and maybe switch to a sawed off shotgun pretty quickly, which is awesome for close range. So a lot of refinements on that front. Even simple things like when you pick up ammo or trade weapons with a buddy they’ve refined whether or not you have to hit a button quickly or have to hold it down to wait for the rotation to complete to make it more effective and quick and seamless.

DS: Are all the new weapons you get in singelplayer available in multiplayer as well?

JR: Yes. One of the other cool new weapons, it’s kinda hard to call it a weapons but it’s a Silverback, which is a mech-type vehicle, if you want to call it that, which is really cool because not only is it a powerful weapon but can also act as cover for your squad mates, which is neat.

DS: That leads nicely into our next question, which is about the vehicles: We know you’ve announced the Silverback, is there going to be a substantial amount of vehicle gameplay in Gears 3 or is it more brief moments where you get to do something a little different from the standard campaign?

JR: I can’t really talk specifically about vehicle gameplay right now. I think fans will have to wait and see when they get their hands on it September 20th. But generally the way you should think about the campaign is it’s the biggest and, no pun intended, most epic Gears that they have ever developed. So you’re going to see a giant campaign, an awesome story, and situations and environments you’ve never seen before in a Gears of War game.

JR: A bit of refining a bit of it evolving. So when you look at dedicated servers are going to be huge in terms of taking care of lag, cheating, and things of that nature. Adding things like medals are going to help people feel more engaged with there character and looking to unlock those to eventually get things like weapon skins and character skins, which allows you to kind of personalize your multiplayer experience to make it more fun. So there are some features to refine it but there are also a bunch of new features to take it to the next level.

DS: You mentioned this iteration of Gears of War has four player co-op. Is that going to be available same system or over Xbox Live for four players?

JR: You can definitely do four player system link for sure. But just on one box it’s two player split-screen.

DS: Does the addition of two new players in the co-op allow for an evolution and creation of new gameplay or new level design based around four players as opposed to just two?

JR: Definitely. When you finally get to play as four players co-op over Xbox Live, if that’s the way you love playing campaign games, which I personally love, It’s a lot of fun playing with friends, you will see now that it’s four players that they have evolved the gameplay design to make it more compelling for what previously might have been the two sub characters.

JR: It does scale and you also have the ability to play on different difficulties as well if you choose to.

DS: The original Gears was touted as a great graphical achievement in HD graphics and Gears 2 again. Was Gears 3 again given the push to make it the graphical benchmark for this generation of consoles?

JR: Definitely. Gears has always been a franchise that has pushed the envelope graphically. Especially being the conclusion to the trilogy Epic and Microsoft wanted this to be no different in terms of a lot of new effects, lightning features, graphical elements that we haven’t seen before. So it was a focus to make sure this was the best Gears that’s been put out so far.

DS: You’ve mentioned a couple things already but we were wondering if you could talk about some specifics you’ve done in the graphical department on this game versus things we might have seen in Gears 1 and Gears 2.  What sets this one apart from those two?

JR: In terms of specific graphical elements when can look at things like the lighting effects, character animations, skin, dust, and lighting; those are the things that stand out. But then also you’re getting to visit a lot of new places in Sera that you haven’t seen before. You get to see how beautiful the planet used to be. There are some pretty big and colourful environments, which are kind of new for Gears and it’s kinda nice to see Sera in a different light, to see the bigger context of the planet.

DS: We know Gears 3 has stereoscopic 3D, was that always planned from the beginning to be part of Gears 3 or was that something talked about and then added in later in the development?

JR: I don’t know if Epic really intended it from the beginning, but I think the fact that we shifted the launch from spring to now September 20th just gave them a lot more time to do things like the beta, which allowed us to stress test things like the dedicated servers, weapon balancing, maps and spawning, and all those types of things. But also polish the game and perfect things like 3D.

DS: Going back to Gears being a benchmark in HD graphics, was that a similar goal with the 3D? To really set it apart from other games that have been implementing 3D?

JR: I think for us, first and foremost, not only Gears of War 3 but Xbox 360 we’re all about delivering the most complete gaming experience and with Gears of War 3 it’s nice to add the 3D because now not only do you have this amazing campaign, amazing graphics, awesome multiplayer modes, and a great community with new personalization features but we also now have 3D, which I think is just the icing on the cake.

DS: You’ve announced a Gears Of War 3 season pass that gets fans and players the first four pieces of DLC at a lower price. Could you talk briefly about how that works and how you get that season pass, and the basics of it?

JR: Ultimately you can purchase it on Xbox Live. Really what it essentially does is you get to pre-purchase the first 4 pieces of content that will be released as DLC and I think eventually it works out to a 33% discount by buying it all upfront at once.

DS: Do you see that model of these season passes as the new trend in how to distribute and market DLC to gamers?

JR: It seems to be effective and something a lot of developers are testing out. And I think ultimately if you can pass on savings to the consumer as well as being able to deliver content in new ways and giving customers choice I ultimately think that’s the best thing to do.

DS: Does Gears of War 3 officially conclude the story of Marcus, Dom, and Delta squad? Or should fans expect more from Delta Squad in the future?

JR: You can expect Gears of War 3 to have a definitive conclusion to the main story arc that’s been going on in the franchise for sure.

DS: And even though this is the conclusion of this particular story arc in Gears is there any view to the future of Gears? Like potential games that take place in the universe of Gears but not necessarily with Delta Squad?

JR: We’re not talking about future Gears of War or anything post, Gears of War 3 that’s what we’re really focused on. But even post-September 20th once the game comes out you can count on a lot of DLC. Gears of War has evolved and is up to know a 13 million unit franchise on Xbox, hugely popular, and it’s also expanded into a lot of things like novels, action figures, graphic novels, so it’s evolved into much more than just a gaming franchise, which the universe is definitely going to stay alive through different vehicles like that as well.