Back when the game was first released in 2012, Halo 4 marked a strong return to the Halo franchise’s roots, at least as far as the game’s single player campaign was concerned. The story was focused and captured why the Halo franchise has remained compelling for over a decade, with balanced gameplay and a focus on the relationship between the Master Chief and Cortana. The result was widely regarded by fans and critics alike as one of the best entries in the franchise.

Fast forward to 2015 and the first iteration of the series developed from the ground up for the Xbox One (if you don’t count The Master Chief Collection) is finally upon us. So does Halo 5: Guardians live up to the franchise’s lineage? In some ways it certainly does, and in others it unfortunately does not. While the gameplay remains intact and its multiplayer is a return to what made the franchise popular in the first place, the game’s story is a significant departure from Halo 4‘s focused effort.

Those familiar with the Halo franchise will recall that Halo: Combat Evolved featured a concise, relatively simple plot. Halo 2 was a stark departure with over the top set pieces and a complicated story. The game also shockingly forced players to play as the Covenant’s Arbiter for a significant portion of the narrative.

If Halo 4 was a modern version of Halo: Combat Evolved, Guardians is a reimagining of Halo 2, and while the game is a significant improvement over the multi-perspective gameplay featured in the second entry 12 years ago, many of the issues present in that title pop up in Guardians. Hardcore fans will likely be miffed that they’ll spend much of their time playing Guardians as Spartan Jameson Locke, the leader of Fireteam Osiris, the squad tasked with taking down Halo’s iconic Master Chief and his squad, Blue Team.

In Guardians, Master Chief and his team have gone rogue in an effort to hunt down Cortana. Most of the story revolves around the pursuit by Fireteam Osiris. Along the way players are introduced to new characters like the Warden, as well as familiar faces such as Dr. Halsey and the aforementioned Arbiter, as well as a variety of artificial intelligences, including one that’s amusingly reminiscent of Halo: CE era Cortana.

The game’s plot feels like a setup for something broader, similar to how Halo 2’s story was a primer for the events of Halo 3. Halo 5 ends on a cliffhanger that feels neither satisfying nor justified. It will be interesting to see how fans react to the game’s finale now that the series doesn’t hold the cache it did when Halo 2 was released in 2004.

While neither squad’s members ever become fully realized characters (unless you’re familiar with the series’ expanded universe), Blue Team and the Master Chief portions of Halo 5 feel as if they were tacked on to avoid the wrath of hardcore fans. Bungie, the original creator of the Halo series, received a significant amount of backlash for the minimal amount of time players spent playing as the Chief in Halo 2. Here, Master Chief’s levels and story seem like an attempt to preempt those complaints.

With that said, Locke and his squad are a welcome addition to the Halo universe. They offer an interesting perspective on how other Spartans view Master Chief, although it would have been great if all of Locke’s squad felt like fully fleshed out characters rather than stand-ins. Edward Buck (voiced by Nathan Fillion and returning from Halo 3: ODST) and Holly Tanaka are the most fully realized squad members, but they still seem incomplete. With Guardians, it feels like 343 Industries wants to blaze its own trail with new characters and a new story, but it undercuts its own efforts by shoehorning Master Chief into the events.

Fortunately, while the game’s story and character development are lacklustre, the balanced, expertly paced gameplay the Halo franchise is known for is present in Guardians, which contains some of the most memorable stages in franchise history. The game recycles Halo 4’s pattern of bombastic cut scene, heated firefight, and moment of calm, but even after all these years the formula works just as well as it did in Halo: Combat Evolved.

Similar to Halo 4, players will spend most of their time in Guardians fighting Prometheans rather than the series’ typical foes, the Covenant, although portions of the game are focused on taking down the franchise’s classic enemy. Some of Guardians’ more entertaining levels involve a civil war between the Covenant and the Arbiter’s splinter group of Elites, the Swords of Sanghelios. An early mission in the game that takes place on a glassed planet is particularly compelling and feels like a throwback to Halo 3: ODST’s investigative gameplay.

Meanwhile, despite the disappointing story, the Halo 5 campaign does feature some of the series’ best levels, especially for cooperative gameplay. In fact, the plot seems to be completely built around that feature. The ability to command your AI squad with simple directions is great and adds another level of strategy to Guardians, particularly when playing on higher difficulty levels.

More importantly, since there are four members on Fireteam Osiris (Holly Tanaka, Edward Buck, Olympia Vale, and Spartan Locke) and four members on Blue Team (Master Chief, Frederic, Kelly, and Linda), when playing co-op, each player actually controls a character in the story and not just a faceless Spartan like in past Halo titles. It sounds like a superficial change, but it makes for a more cohesive story and gameplay experience when playing with friends. Many of Halo 5’s levels feel like they’ve been designed specifically with cooperative gameplay in mind, to the point that Halo 5’s single player campaign is more fun if you play it with friends. 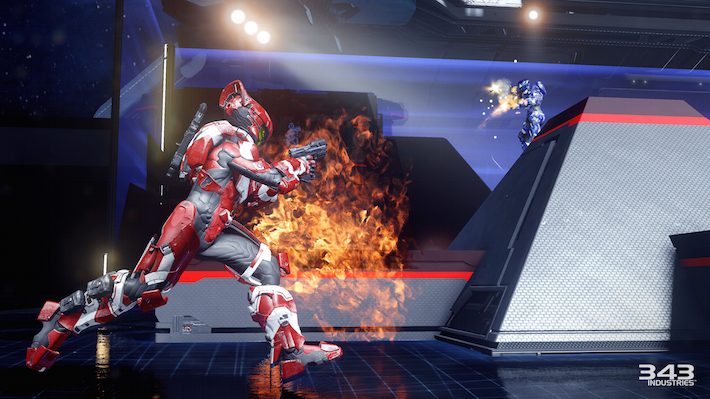 Of course, Halo 5: Guardians also has a multiplayer mode, which is likely the main reason many people continue to stick with the franchise. The relevance of Halo’s multiplayer has waned significantly now that franchises like Battlefield and Call of Duty have eclipsed Halo’s popularity, but with Guardians, 343 is betting it can once again make Halo a top-tier, competitive first-person shooter. After all, the series was one of the first professionally played FPS games, especially when it comes to consoles. MLG was practically built on the series back in the early 2000s.

Longtime fans of Halo will be happy to know that with a few exceptions – the Assault Rifle still feels over powered and I’ve yet to understand why Ground Pound is even in the game – Guardians’ maps and weapons feel expertly balanced. That’s likely because 343 brought on hardcore fans and eSports professionals as advisors during the game’s development, and it’s paid off with maps such as Empire and Eden that stand out as some of the best in the series. Midship, an old school favourite, has also been revamped in the form of Truth, which like many of Halo 5’s multiplayer features, will definitely appeal to fans of the series. Gameplay additions like clamber (the ability to bound over objects), the thruster pack, and Smart Scope (aiming down your weapon’s sights with the left trigger), all help modernize the Halo formula with more recent first-person shooter genre innovations. Fans will also be pleased to note that a visible ranking system for playlists is back in Halo 5, although it’s unclear how many playlists will be live at launch (the pre-release build of the game only features one list with a mix of game types).

Having said that, Halo 5’s lack of local multiplayer is disappointing. It’s a feature I admittedly wouldn’t have used very often, but it still feels like a glaring omission since it was once so important to the series. 2015 is a different time and local multiplayer gaming just isn’t as popular as it once was, so in some ways it makes sense to concentrate on online multiplayer, but it’d still be nice to have the option.

As for the game modes, Warzone’s 12-on-12 gameplay is chaotic and reminiscent of a miniature version of Destiny. That’s not why I personally enjoy the Halo series, but it is a welcome diversion. The same can be said about Halo 5’s new Requisition system that allows players to purchase card packs with points earned through in-game actions (or actual currency). Only cosmetic upgrades like armour and weapon skins can be used in the Arena (any upgradable perks and advantage-granting weapon mods are confined to Warzone), helping to maintain a perfect competitive gameplay balance. Guardians marks a return to the arena-based multiplayer gameplay the series is known for, which will excite even the series’ most hardcore fans.

In the end, Halo 5: Guardians feels like the setup for a much bigger, broader experience that 343 Industries is planning for Halo 6, at least in terms of the game’s campaign. Yet while the game’s story is disappointing, it’s polished, graphically impressive gameplay runs at a smooth 60 frames per second with variable resolution (a feature I didn’t even notice during my many hours with the game), and it looks just as breathtaking as you’d expect from the Xbox One’s marquee franchise.

With Halo 5: Guardians, 343 Industries is taking the Halo series in a new direction, both in terms of singleplayer and multiplayer, which means the game will likely become one of the more divisive titles in the series’ history.