The stakes are high in “Hassun,” and it’s clear from the start. Will Graham (Hugh Dancy) is trapped in a mirror neuron short circuit at the top of the cold open, throwing the switch on his own electric chair. Episode three of Hannibal’s second season is a legal procedural that threatens to capitally punish Will for the crimes of the eponymous Dr. Lecter.

It’s torturous to see the hero trapped in the lethal end game of his psychiatrist’s design. Will stares into his own dead face, limp atop his smoking and leather bound body, knowing what it will feel like to kill himself because he’s excellent at getting into other people’s heads and someone is doing this to him. Graham wakes up with a scream: This will happen to him very soon.

Hannibal (Mads Mikkelsen) must be feeling this dread too, as if perhaps, even though the death sentencing of Will Graham is a definitive tactical victory on his behalf, it feels like he is the one going to the chair in the end. These are all his own crimes after all and if Hannibal is capable of loving anyone, it’s the man he’s made to look like himself.

As the cannibal doctor dresses for trial the camera interchanges with shots of Will getting all court-formal too. The entire series has had a mirror placed between the two characters, allowing them an opportunity to best see themselves when they stand opposite each other. Sometimes the reflection was distorted for Will, but that was only because Hannibal was bending it in order to find something in his own reflection.

In court, Will has his charges read aloud. Four counts of murder in addition to the killing and (at least partial) cannibalization of his surrogate daughter, Abigail Hobbs. The crimes are punctuated with projected slides of the theatrical crime scenes of his alleged victims: Cassie Boyle, displayed on a stag’s head sans lungs; Marissa Shurr impaled on antlers in the Hobbs hunting cabin; Cotard’s patient Georgia Madchen, burnt alive in an oxygen tank. The prosecution omits the most gruesome from the slideshow, Will’s neurologist with his mouth torn as wide open as possible, left to drown in his own blood.

The prosecution contends that despite Mr. Graham’s confused outward appearance, underneath his well crafted person suit is the smartest man in the room.

As if the lawyer were talking about the doctor himself, the real psychopath sitting in the audience, Hannibal Lecter beams with pride.

Jack Crawford (Laurence Fishburne) takes the stand, after having had a crisis of faith in the hall with FBI investigator Kade Prurnell (Cynthia Nixon). Jack lets loose some of the guilt that he’s been feeling, and comes to Will’s defense when the prosecution claims that Graham enjoyed the opportunities that working for the FBI allowed him.

Jack firmly states that Will hated the work, and that the only thing that kept him doing it, even when it was destroying him, was the fact that we was saving lives, not ending them.

An envelope addressed to Leonard Brower, Will’s attorney, makes its way to the defense table. As the lawyer explains to Will his Don Draper school of criminal defense (It’s not law, it’s advertising) he opens the manila package and dumps a severed ear out.

After the title sequence rolls, we catch up with Jack and Hannibal in the doctor’s office. Jack hasn’t felt better in weeks, having stood up publicly for his friend. Hannibal (dressed in what I would call the most striking of his devilishly handsome suits) wonders if this was a highly visible resignation letter, and Crawford admits he feels content to let the chips fall.

“I’ve given my life to death,” he says, to which Hannibal offers the veiled threat “And now death has followed you home, come to live in your house.”

The CSI team is struggling with the new facts in what might not actually be the Will Graham case after all. The hand delivered ear looks to have been severed with the same blade that Hannibal used to remove Abigail’s appendage. The doctor practically admits to the crime, but he is so close to the team, and so scot-free of evidence, that none of them even notice.

Lecter visits his patient in the Baltimore State Hospital for the Criminally Insane and has a heart to heart. He tells Will the good news, that there may be another killer, but Will has little hope. Hannibal tells his bestie that the ear is an opportunity to be saved, and in a heartbreaking plea delivers, “He cares what happens to you.”

Back in court, Freddie Lounds (Lara Jean Chorostecki) adds the flavourful dash of noir that this show so eagerly devours. Complete with the shady clarinet that accompanies characters of her specific caliber of sleaze, she hilariously swears on the Bible before having all of her damning testimony stricken from the record after the defense has her admit to being successfully sued for libel six times.

It is a wonderful and quick re-introduction to the show’s best tertiary character. The show is at its best when Lounds is there, because as volatile and morally reprehensible as she is, Freddie brings the same qualities out of her fellow players. The source material for the series is genre fiction, and she is a necessary staple.

A shot from the opening scene of the series’ best episode “Sorbet,” that spun out of Hannibal’s ear as he was listening to an aria sung at a benefit for hunger relief, is recreated using the newest piece of copy-cat killer evidence. This pins the crime on Hannibal, in case there was any lingering doubt from the audience, and just like in the episode being referenced, is signals one of Dr. Lecter’s greatest performances.

The ear has led the FBI to a house, rigged to explode as soon as the guileless and nameless law officer tasked with opening the door enters. All that’s left is, as Aaron Abrams perfectly puts it, “Will Graham’s greatest hits.”

An immolated body, mouth ripped open in an unholy scream, missing its ear and displayed on the severed head of a stag near-perfectly recreates all of Hannibal’s incriminating love letters to Will Graham.

The evidence is brought before the judge by Jack, but the FBI-man is sent packing. Any new evidence has to be brought forward by Brower in a new defense.

After some damning testimony from hospital warden Frederick Chilton (who still surprisingly solicits zero sympathy despite having been disemboweled last season by former patient Abel Gideon), Hannibal gets Will alone in a glass confessional and hands him the pictures of his latest handy work.

“My admirer?” asks Will.

Will does his magic, recreating the crime scene in his head. He does everything that Hannibal did to the poor mutilated victim, including the blunt discrepancy that the loving doctor left for him: the greatest hits was killed before being mutilated, whereas the others were destroyed with still beating hearts.

The doctor wrote his best friend and only love a poem, and he submits to Will again, “Are you going to let his love go to waste?” 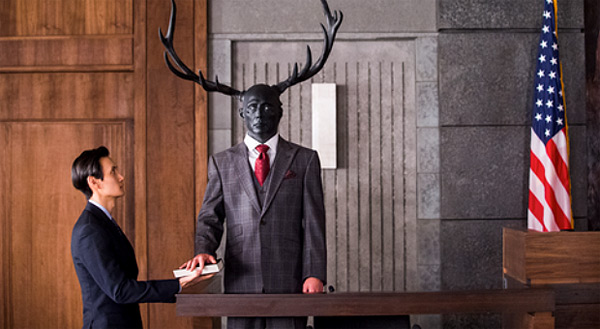 Brower takes the new evidence and angles for a mistrial, which in his books is a win. So against Alana Bloom’s advice, Hannibal is called to the stand to defend the man he secretly put in this situation with his own actions. Will sees him as the besuited Manstag, taking the stand after swearing in. He uses this opportunity again to impress on Graham, that despite everything they have been through, Lecter still sees Will as a friend, and he always will.

The fourth act twist comes in the form of Hannibal’s insurance policy. Because of the discrepancy between the cause of death and time of mutilation, the new evidence is ruled inadmissible. Will is out of defense options and the trial will continue.

Chopin’s Prelude No. 4 plays over top of silent and contemplating men: Jack, the real target of Hannibal’s humiliation, drinking and guilt wracked; Hannibal sitting across from the chair that he used to see himself in when he would analyse his friend; Will, on a bed in the cell that will some day protect the world from Hannibal Lecter, awaiting the death he imagined at the beginning of the hour.

The closeup of Hannibal in the man-triptych is the most telling, and it is a credit to Mads Mikkelsen that so much can be said with a picture of his motionless face. He has engineered a situation to get what he wants by writing a poem for the doomed man that he loves, and because another man who fancies himself in control of the law can’t appreciate the intricacies of Hannibal’s art, he is being made to feel powerless and alone.

The next day, a janitor finds the result of this lack of appreciation hanging from the ceiling of the courtroom: the blindfolded judge with his heart and brain removed, placed on the scales of justice he is holding in his dead hand.

Will dreams of the allegory. His cell door is open, and he exits, following the hoof sounds of the ravenstag. Hannibal calls his name, he is the one who opened the door.

The final scene between Alana and Will discusses what’s happened. The judge’s mutilation means the trial has to be thrown out. It has bought Will time and provided him with a revelation. Whoever the killer is, he walked out of the courtroom with him, and Will finally understands what he wants.

Alana underlines the difference between her love and Hannibal’s: She wants to save him.

Despite the fact that no one is eaten in it, “Hassun” is perfectly distilled Hannibal. It takes the conventions of a well established television format – the courtroom procedural – and mutilates it into a nightmarish message about love. Not the kind of love that makes you want to save someone, but the one-sided sort that compels you do horrible, violent things.

The implication that Hannibal loves Will Graham has been threaded through the show since the characters met in episode one. Now, with Lecter operating at full romantic murder-steam, it is finally clear why he has fallen for his patient: This Devil thinks that he is God, and the only thing he can love his his own reflection. Hannibal needs Will so that he can love himself.