All That Jazz (Bob Fosse, 1979) – It’s seems ridiculous to use the word “underrated” to describe a groundbreaking, show business legend like Bob Fosse, yet as a filmmaker that’s sadly true. As a choreographer and Broadway director, Fosse’s name is practically a brand. Yet, a filmmaker he never quite gets the respect he deserves. Sure, everyone acknowledges the undeniable brilliance of Cabaret, but beyond that people forget just how remarkable he was as a filmmaker. He only made five movies, but each was fascinating, unique, and could only have come from Fosse. His first feature was a Sweet Charity, a glossy 60s blockbuster musical with a Fellini origin, a Neil Simon script, a French New Wave influenced shooting style, and some spectacular Fosse dance numbers. It’s somehow his weakest movie. Then came the perfect Cabaret, followed by hisLenny Bruce bio Lenny, an experimentally structured and heartbreaking exploration of Bruce’s fascinating life. His final movie is the deeply underrated and horrific exploration of the poisonous misogyny of showbiz Star 80.

Before that came All That Jazz, a surreal, harsh, depressing, beautiful, flawed, and fascinating autobiographical movie heavily influenced by 8 1/2.  It might not be his best, but it’s close and certainly the most quintessentially Bob Fosse movie ever made. That’s probably why the Criterion Collection decided to release it in a beautiful set that also doubles as an all purpose archive for all things Fosse. All That Jazz is a great movie and now has a Blu-Ray that’s almost better.

Roy Scheider stars as a thinly veiled Fosse surrogate who’s simultaneously launching a new Broadway show while finishing the editing on a film he made about a famous comedian as well as juggling various infidelities with women, being a father, and healthy drug habit. It’s a slice-of-life story, delivered in a fragmented, surreal, and subjective style. The film is structured almost from the stream-of-conscious point-of-view of the protagonist’s broken brain. Reality mixes with fantasy, memory, and grandiose musical numbers. It’s a portrait of an artist and his futile attempts to escape life through art even though one always ends up influencing the other. 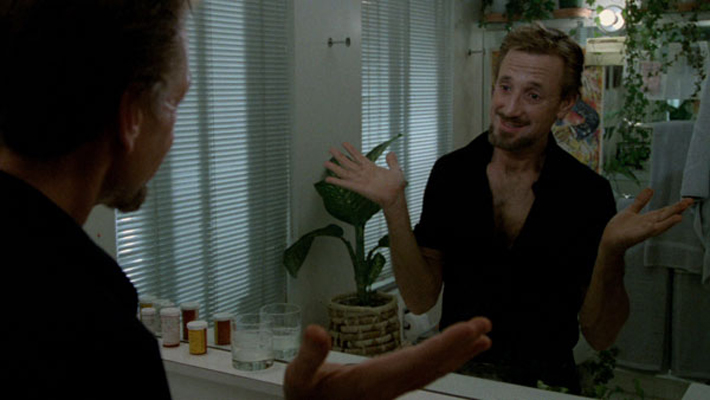 Fosse always claimed that the film was in no way based on his life, but seeing is believing, and the film’s greatest strength is its unflinching honesty. There’s not a split second of screen time in which Scheider’s character is anything less than a mess. He’s an incredible artist and a man capable of brilliance, but kind of a shit.  Fosse delights in using All That Jazz as a means to delve into all of his personal failings in a movie that also showcases all of his greatest artistic strengths.

The first and most obvious strength is the choreography, which is iconic. Particularly, “Take Off with Us,” which is simultaneously the ultimate example of Fosse’s sexualized dance style and also an act of self-parody (which fits in with the renegade self-consciousness of the entire production). By All That Jazz, Fosse was also an influential film stylist and his uses the camera as another dancer in the beautiful musical sequences as well as the quiet scenes of pained human drama. It’s a beautifully stylized movie, yet never without purpose. All of the musical numbers either fit the plot or explore Scheider’s psyche. Elsewhere, the looping camera moves, proto-MTV musical editing, and stream-of-conscious editing pull the audience inside the protagonist’s damaged and self-destructive mind.

All That Jazz isn’t an easy movie to say the least, but it’s always an entertaining one filled with such raw and personal emotion that it can be difficult to stomach. As one would expect from such an experimental personal project, it’s also an uneven and deeply indulgent movie. Yet, that’s almost part of the point of the grand experiment, so Fosse kind of gets away with it. Cabaret may have brought the musical kicking and screaming into the adult 70s movie mindset, but All That Jazz turned the genre into a means of psychosexual personal confession. No one else has dared to attempt that tick since and why would they? It was a style of filmmaking Fosse invented with All That Jazz and for better or worse the movie he was born to make. From anyone else, it would be imitation. For Fosse, it was all of his talent, baggage, and lifelong obsessions combined into one two-hour rush of pure cinema.

Unsurprisingly, Criterion has treated All That Jazz to a Blu-Ray worthy of the film and the Fosse. All That Jazz has been treated to a horrible DVD transfers in the past due to its difficult presentation. Fosse shot the film with a mix of woozy fantasy images, grainy almost-documentary footage, and grandiose n’ glossy musical numbers. That’s a vastly differing array of visual styles that has typically been shoved together into a muddy mix in previous transfers. Here, the movie looks astounding, with each visual style meticulously recreated. Whether it’s the remarkably detailed shots of dozens of bodies dancing together in the opening casting cattle call montage, the hazy flashbacks, or the disco coke-out overload of the final musical fantasy, these images completely explode of the screen. The film hasn’t looked this strong since theaters and watching the disc feels like finally glimpsing what Fosse had in mind. Toss in a pounding and deep lossless surround mix and you’ve got a remarkably immersive Blu-Ray experience that puts a movie theater right in your living room. Beautiful.

On top of that, the disc is flat out overflowing with special features. Everything from the two previous DVDs has been included, the behind the scenes footage of Fosse, the Liza Minelli-heavy docs about the film/Fosse, the archival interview with the writer of “On Broadway,” and the audio commentaries from editor Alan Heim and star Roy Schieder (whose mostly silent commentary has mercifully been reduced to a 35-minute highlight real). Then come the new features. First comes a new interview conducted by the Criterion folks with Ann Reinkinh and Erzsebet Foldi about their roles in the film as Fosse’s daughter/troubled girlfriend as well as their actual relationships with Fosse (Ann Reinking essentially played herself in the movie in a role Fosse wrote for her, yet he still made her audition. So, needless to say she has complex emotions about the whole thing). Next comes a fresh interview with Fosse’s longtime editor Alan Heim who chats about how the pair developed a style together editing Lenny that changed how Fosse shot the rest of his films. Fosse biographer Sam Wasson also offers a 21 minute summary of Fosse’s life and career in relation to All That Jazz. Finally, I’ll bet you’re disappointed that the long deceased Fosse didn’t get to contribute to the disc for his most personal film, right? Fear not, you’ll get a 30-minute Tom Snyder interview with Fosse and dancer Angnes de Mille about the Broadway lifestyle, a 27-minute career summarizing interview on The South Back Show, and a 27-minute interview between Fosse and Gene Shalit recorded a year before the director’s death discussing the differences between directing for the stage and film. That’s one stacked disc with hours of info not just about All That Jazz, but the remarkable Bob Fosse himself. In other words, it’s a dream disc for fans of the film or the director from the good folks at Criterion who seem to crank out dream discs on demand. (Phil Brown)