Judgement at Nuremberg (Stanley Kramer, 1961) – Edmund Burke said it best: “The only thing necessary for the triumph of evil is for good men to do nothing”.  This couldn’t be truer than in the 1961 classic Judgment at Nuremberg, and it serves as a salient reminder that when the primary focus is to lay blame and make excuses, doing the right thing becomes increasingly difficult.

A brave film that deals with the atrocities of the Holocaust in a near documentary style fashion and a spectacular cast, Stanley Kramer’s film is a complex tale of morality that confronts the issues of war crimes, the social impacts that the Nuremberg trials had on the people of Germany, and the face of ideological differences between right and wrong.

Judgement at Nuremberg strips down not only what people had to do to survive in a time of upheaval and strife, but the toll such living takes on people. It brings up the very relevant point that in the face of unimaginable evil, sometimes living through it and surviving can be worse than standing up and at least trying to do the right thing. It’s a great case for living a life free of detached apathy.

Using his work to confront a wide variety of issues during the late 1950’s and 1960’s, Kramer truly hits the apex of his skills here as even at the film’s lengthy 3 hour and 10 minute running time plays as an gripping and effortless drama.  Writer Abby Mann, who won the Academy Award for best adapted screenplay, makes every word feel like vital. Both Mann and Kramer make this movie feel grander than the confines of the courtroom; it’s an epic in a single room.  Mann grapples with still relevant social issues while never skimping on character development, giving the film emotional depth and not just narrative importance.

The indomitable Spencer Tracy, in one of the finest and final performances of his career, is fantastic as Chief Judge Dan Haywood ,who gets pulled out of a forced retirement when he loses his latest election to hold court over these infamous set of trials.  He’s tortured because of how he sees the law playing itself out, but he can’t separate himself from the core values of right and wrong.  He bears witness to a country in denial about what happened, not only for its collective sanity but for its very survival in a silence that would persist for decades even after the trials had ended. 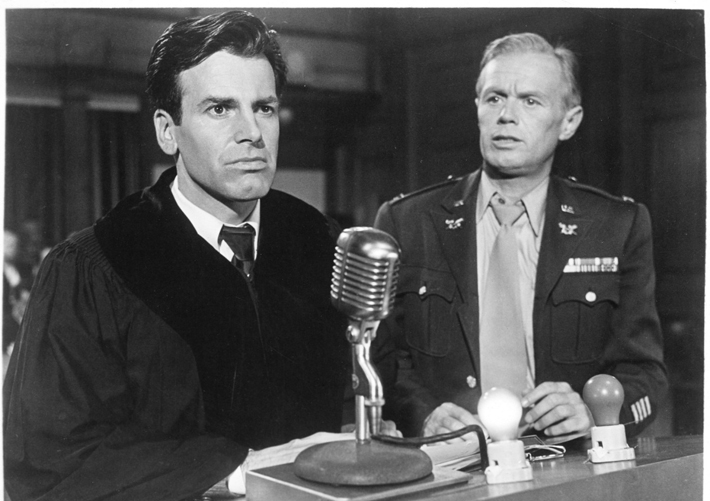 Burt Lancaster, as the stoic and silent Dr Ernst Janning, is an equally tortured soul who believes in his country, but is unable to live with himself and what has been done. Maximilian Schell is simply brilliant as Defense Attorney Hans Rolfe, who defended his clients with a fervor that’s magnetic to watch but his job eats him up inside. It’s easy to see why he took home Oscar gold for his work in this film, his thunderous voice cutting through the courtroom.  Marlene Dietrich, Montgomery Clift, Richard Widmark, Judy Garland and William Shatner all deliver strong supporting performances with equal degrees of complexity.

Judgment at Nuremburg reminds us of the horrors the human race is capable of.  It also stresses that no matter the differences that we have with each other on any social, ideological or political levels, it’s our responsibility above all else to denounce any evil and never be complicit with it.  It doesn’t matter if one person died or if five million died. The one human right that always has to be defended is the right to live.

Picture and sound quality on the Blu-Ray are quite solid, and the special features include the option to watch the film in its original Roadshow version with an orchestral intro, interlude and ending. There’s also an isolated music and effects audio track, a conversation with writer Abby Mann and Maximilian Schell, a behind the scenes featurette, a tribute to director Stanley Kramer, and the original theatrical trailer. (Dave Voigt)