It’s officially upon us. The landmark 20th anniversary of the Hot Docs Canadian International Documentary Festival kicks off this Thursday night with the debut of the Canadian made film The Manor (review coming this Wednesday) and continues on at various Toronto area theatres until Sunday, May 5th. While the weather hasn’t been cooperating very much as of late (it is late April, right?), things are heating up with the festival screening over 200 films from around the world in an annual showcase of some of the best non-fiction filmmaking out there.

Over the next several days, be sure to come back for all the latest reviews and filmmaker interviews from this year’s festivities, but here now is a first look at some of the many great films screening this year from the high profile Special Presentations program. For a full list of features, venues, and more information, head on over to hotdocs.ca. 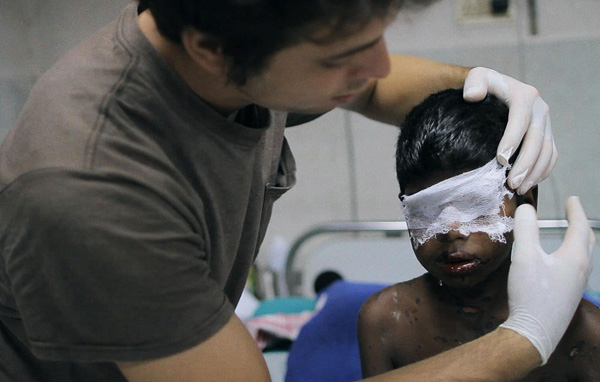 Recommended: Unquestionably, but you’re going to need a hug the second it ends.

Equal parts poignant and emotionally devastating, Steve Hoover follows his best friend Rocky from Pittsburgh to Northern India where he finds peace and comfort volunteering all of his time at a paediatric AIDS orphanage for women and children.

Following one of the most quietly harrowing openings to a documentary, Hoover never obviously goes for the heart and the guts of the viewer. The balance between heavier and more meditative feel good moments is perfect. It’s tough to watch at time, but it’s a true testament to the power that a single individual can have on those most in need and a great portrait of a strong friendship.

Most importantly, Rocky is a thoroughly fascinating subject, full of inner conflict and boundless love for those around him. He’s not a perfect person, and sometimes he makes selfish and misguided mistakes (like possibly getting married just to stay there). It makes him and the film seem infinitely more rewarding. It’s easy to see why it won the Grand Jury Prize at Sundance and how it will probably gain far more acclaim before the end of the year. It will stick with you for a very long time after it ends.

Chronicling the work of famed atheists and scientists Richard Dawkins and Lawrence Krauss around the world, Gus Holwerda’s documentary is a sometimes unnecessarily heavy handed, but overall fairly special and enjoyable road movie of a different sort.

Krauss (who also serves as an executive producer) carries on dialogues with Dawkins to sold out auditoriums often with people protesting their very existence and the challenging of religious beliefs only feet away. Their talks both together and apart are the real meat of the film, but even then it’s edited down into easier to digest chunks. Still, they’re fascinating figures and the relative ease that they bring to sometimes hostile discussions is admirable.

Less effective is Holwerda’s desire to make these two into veritable rock stars by relying heavily on pop songs and bookends to the film featuring famous faces giving their two cents on atheism. It becomes a film clearly aimed at the high school and university crowd, but I guess that’s the new battlefield for this discussion. Still, it feels unnecessary when the subjects are as interesting as these two. Their friendship borne from shared understanding is more rewarding.

Recommended: Sure, provided that you’re a fan of old school American R&B and Southern Rock. Otherwise, there’s not too much else here for casual watchers.

Near the Louisiana-Alabama border on the banks of the Tennessee River lies one of the greatest recording meccas in music history: the sleepy hamlet of Muscle Shoals. It’s famed recording history at both the iconic Fame Studios and Muscle Shoals Sound are told here as a filmed oral history from those who were with it from the beginning to the end.

The early days with impresario and former farm boy Rick Hall making iconic records for the likes of Clarence Carter, Etta James, and Wilson Pickett (just to name a few of the very many) with his famed studio band The Swampers eventually gives way to the equally interesting story of his band leaving their boss behind to jump on the Southern Rock bandwagon at their own studio right down the street.

It might be a bit long in the tooth, but these films often are since they are made specifically with the completist in mind. Those who know about Muscle Shoals and its particular sound will find a lot of anecdotes and facts they never realized before, but it bounces around a bit at times and newbies might have a hard time fitting in. Still, any film that talks about how The Rolling Stones wrote “Wild Horses” and manages to make Bono look humble is an accomplishment in itself.

Recommended: Yes, for the most part

The neatest thing about this look at the incarceration of three members of the Russian feminist art punk collective Pussy Riot following a 2012 impromptu performance in a Moscow Orthodox church is how both sides of the equation can be seen as having almost the same argument. While it’s undeniable that imprisoning three women for expressing themselves and the fears about their society in a frank, artistically confrontational manner, the filmmakers take the time to show how the church could also say the same thing about being repressed by 70 years of Bolshevik rule themselves.

Both side of this argument look disingenuous at times (when band members say they weren’t looking to offend anyone it’s obviously an enormously bullshit answer designed to help skirt prison time), but that’s part of what makes the film work. It does shine a light on how distressingly far right Russia has gone as a country, but it also naggingly elevates the band to something almost unnecessarily ethereal. They’re serving a purpose for social change, but is the Hans Zimmer score that makes the film feel like a Jason Bourne movie really necessary?

Recommended: Yes. It’s a fascinating look at a side of the American medical system that hasn’t been seen before on screen.

Initially formed to help people in rural locations in the Amazon, the Remote Area Medical team now devotes 60% of its resources to helping people in the more isolated areas of the United States. Reichert and Zaman take a look at one such mobile stop in Bristol, Tennessee (at the local speedway) that brings hundred of people from all over the area who wouldn’t ever have access to medical coverage otherwise in this thoughtful look at a section of the population that the health care system seems to be failing terribly.

From the large scale set up and people camping out days in advance through freezing temperatures just for a chance at a spot through the day to day practice that only lasts a single weekend, it’s interesting to note how the medical procedures we often take most for granted (vision, cancer screening, and especially dental) are what falls by the wayside most often when it comes to the marginalized. It also captures just how some of these people are still so self-sufficient and prideful that even coming there is something almost as hurtful and embarrassing as their health issues. It’s occasionally heartbreaking and not everyone can be helped through such a program (and tensions do indeed run high at times), but there’s still a lot of good being done.

Recommended: It’s close, but not really.

Julia Ivanova returns to tell a story of adopted families following her excellent Family Portrait in Black and White (which was a festival standout a couple years back), but with decidedly mixed results this time.

A Surrey, B.C. family that can’t have kids on their own initially plan to adopt two young Ukranian girls, but they become enamoured with the three siblings of the kids so they don’t become separated. It takes four years, but eventually they become a family unit, as Ivanova takes a look at the financial and emotional strains of literally adopting an entire family.

The timeline in the film feels a bit scattershot and there’s quite a bit of filler here. The actual struggles to adopt the family are never documented or even really talked about, leaving a huge blank space in the first half of the film. There’s never really much narrative drive here with much of the drama coming from typical family issues, but the backstory of the kids is intriguing. A second half development dealing with the eldest daughter’s unhappiness adds something the rest of the film sorely lacks, but it’s a bit too late by this point to add much, especially when there still isn’t much focus to be found.